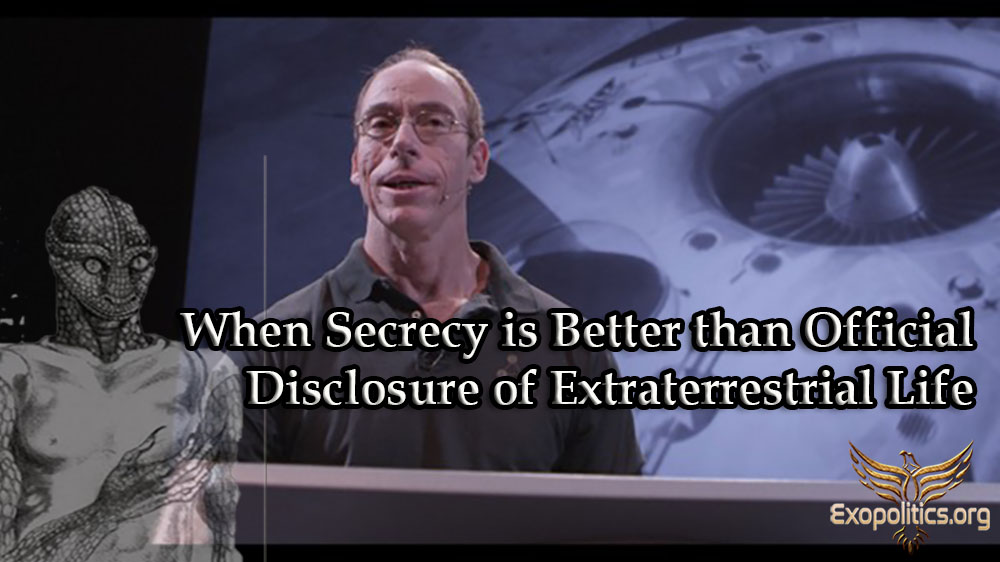 When Secrecy is Better than Official Disclosure of Extraterrestrial Life

Dr. Steven Greer, a leading figure in the UFO disclosure movement, has just proposed an audacious idea concerning official disclosure of extraterrestrial life. In his expert opinion, acquired over more than 25 years of disclosure advocacy, continued secrecy is better than disclosing the truth about visiting aliens if they are depicted in any other way than peaceful nonviolent beings attempting to advance the evolution of human life on Earth.

In the February 5 installment of Gaia TV’s Disclosure series, Greer was interviewed on the topic of the “Architecture of Secrecy” and explained his view about how official disclosure should be handled. He asserted his controversial idea that continued secrecy is better than any disclosure scenario that depicts extraterrestrials as in any way constituting a threat:

My biggest concern is that there’s a hijacking of disclosure around a narrative of a threat, of an us versus them scenario. That is the sort of thing that can lead to the worst possible outcome.  I wrote a paper called “When Disclosure Serves Secrecy”. Disclosure that would serve the secret agenda is not something that we need. I’d rather have the secrecy continue, frankly. But a disclosure that would be truthful and would be forward looking, and that would have an interplanetary peace initiative, and communication and contact initiative, and that would have the release of these technologies for peaceful energy generation, transportation and what have you, that would transform the planet very quickly  (Video: 9:45)

Greer explicitly referred to Luiz Elizondo and Dr. Hal Puthoff, who are senior figures in Tom DeLonge’s To The Stars Academy, as a major part of the threat scenario that is being currently put out into the public arena through the major news media. On that score, I would agree with Greer that the “Advanced Aerospace Threat Identification Program” (AATIP) which was created within the Defense Intelligence Agency in 2007, and headed by Elizondo up to 2017, was unnecessarily framing the UFO issue in terms of it being a threat to national security.

If Greer only limited himself to critiquing depictions of UFOs and all extraterrestrial visitors as a threat, which AATIP appeared to be doing, he would be on solid ground. However, Greer in the Disclosure interview, as well as in past public statements, made it clear that he is against researcher that depict any extraterrestrials, even if only a small percentage, as a threat in any way.

On May 2, 2006, Greer launched an extraordinary public attack on my exopolitics research for having committed the egregious sin of proposing that extraterrestrials could in any way behave similarly to humans in terms of a wide range of motivations. My research dividing extraterrestrials into different motivational categories, e.g., the good, the bad and the indifferent, was lambasted by Greer as fueled by disinformation.

Greer is no doubt correct that elements of the Military Industrial Complex are exaggerating the threat narrative when it comes to UFOs and extraterrestrial visitation, which AATIP appeared to be currently doing and which I acknowledged back in my 2006 response to Greer. In it, however, I also pointed out that Greer’s bold assertion that there is no evidence of hostile extraterrestrial behavior, can be easily shown to be wrong by examining multiple sources revealing the egregious behavior of some extraterrestrial visitors.

On July 26, 2010, Greer was confronted by Project Camelot founders, Kerry Cassidy and Bill Ryan, over the same issue, and they presented their own evidentiary sources that some extraterrestrial visitors were behaving unethically and maliciously.

In 2018, Greer attacked two of the insider sources I have cited extensively in my secret space program book series, Corey Goode and William Tompkins, as putting out disinformation about aggressive extraterrestrials, Draconian Reptilians, who are described as a prominent part of the planetary control system. In this case, he speculated that both Goode and Tompkins were implanted with false memories and were unwittingly spreading disinformation.

Again, I responded to Greer by pointing out the abundant evidence refuting his audacious assertion that no extraterrestrials behave in ways that are unethical or malicious. Indeed, I showed how his dismissal of Tompkins claims, in particular, ignored the impressive documentation substantiating his information.

With that brief background on Greer’s past public statements on the issue of some, not all, extraterrestrials being unethical and malicious, the context has been set for better understanding the implications of what Greer had to say next in the February 5 interview.

Greer repeated his assertion that continued secrecy is preferable to any official disclosure announcement describing aliens as a threat, even if only partially or a subset of the entire alien visitation scenario:

The disclosure of this subject is the most important announcement in the history of the human race. How it’s handled, it has to be handled with great wisdom and great care. If it is handled with the kind of buffoonery and clumsiness that is evolving, or with partial truths, mixed in with disinformation, with frightening scenarios that scare the hell out of the public, I actually prefer the secrecy. (17:34)

What makes Greer’s views significant is that he claims to be in touch with members of the oversight group of up to 200 members commonly referred to as the MAJIC committee. Greer asserts that he is providing them with an expert civilian perspective on disclosure, where, incredibly, he appears to be advocating continued secrecy if an official disclosure statement is not framed in the way he prescribes.

In short, what is widely regarded as “full disclosure”, where all the facts and evidence of visiting extraterrestrials – good and bad – along with the truth about secret space programs is publicly revealed in an official announcement, is not supported by Greer. On the contrary, he only supports a “limited disclosure” statement where all references to unethical or malicious aliens is sanitized.

It’s hard to envisage that a leading figure in the disclosure advocacy movement could support continued secrecy on any grounds, let alone the dubious grounds Greer asserts, which I and others have shown ignores a large body of evidence. As to why Greer is taking such an extreme position, there are a number of explanations that come to mind. One is that he is personally invested in a secret Vatican initiative to establish a “New Cosmic Esoteric World Religion” through a “false flag alien savior event” as described elsewhere. Another is that Greer has been co-opted or compromised by the MAJIC Committee in charge of extraterrestrial related projects and is sabotaging the disclosure movement by imposing unreasonable demands for a future official disclosure announcement.

Greer’s position that continued secrecy is better than an official disclosure announcement which contains reference to any extraterrestrial visitors as a threat, is a position that he will find increasingly difficult to defend given the public’s growing awareness of all the available evidence of visiting aliens, and the diverse motivations behind their activities. Full disclosure is already well underway through multiple public initiatives  disclosing all aspects of visiting extraterrestrial life and secret space programs, and any effort to filter or curtail such information in ways favored by Greer, are certain to fail.