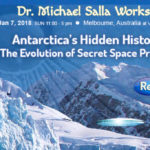 [NOTE: All Prices in Australian Dollars]

A surge in recent scientific and political interest in Antarctica is driven by secret excavations of a flash frozen civilization found under its ice shelves.

Whistleblower claims that the civilization was the result of an extraterrestrial colony established by refugees who came from the Moon approximately 60,000 years ago will be presented to shed light on deeper implications.

In addition, information that elite bloodlines based on hybrid extraterrestrial and human genetics were specifically created around the world to rule over the rest of humanity will be discussed in relation to historic documents.

‘Ice free’ Antarctica documents will be directly linked to whistleblower claims that Nazi Germany established secret bases under the ice shelf with the assistance of various extraterrestrials.

The evolution of a Nazi Secret Space Program and its connection to a Multinational Corporate Space Program controlled by global elites will be a very hot topic of interest.

The classified construction of U.S. military bases under Project Iceworm with the goal of finding & developing alien technologies for special weapons programs will be scrutinized in relation to the 1959 Antarctic Treaty—which expressly forbids such activities.

Information detailing excavations occurring throughout Antarctica and their impact on the stability of the frozen continent’s ice shelf will also be explored.

Finally, the prospects for disclosure of recent Antarctica discoveries will be shown in a dynamic relationship linked to multiple agendas by the principal parties involved in the secret excavations.

* The difference between the lecture, seminar and workshop events is the available time allocated to each which will dictate how much material can be presented, and Q&A allowed. Dr. Michael Salla is an internationally recognized scholar in international politics, conflict resolution and U.S. foreign policy, and has taught at universities in the USA and Australia. He is more popularly known as a pioneer in the development of ‘exopolitics’, the study of the main actors, institutions and political processes associated with extraterrestrial life.

Dr Salla wrote the first published book on ‘exopolitics’ in 2004, and followed this with another examining exopolitics and US Foreign Policy in 2009. He authored Galactic Diplomacy in 2013; & this was followed by Kennedy’s Last Stand (2013), which investigated the relationship between classified UFO’s and the Kennedy Assassination. In 2015, he authored Insiders Reveal Secret Space Programs and Extraterrestrial Alliances (2015). Dr Salla’s most recently published book is The US Navy’s Secret Space Program and Nordic Extraterrestrial Alliance (2017). His website is exopolitics.org