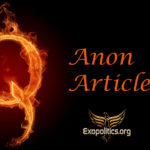 QAnon (aka Q) represents a group of U.S. military intelligence officials committed to preventing the Deep State’s agenda to weaken the U.S. Military through endless wars, and diluting/replacing the U.S. Constitution as critical steps to a one world government /New World Order. QAnon’s connection to the Trump Administration can be traced as far back as 2015 when he was allegedly recruited by U.S. military intelligence to run for the Presidency. Since QAnon’s public emergence on October 28, 2017, QAnon has released numerous posts that appear to be sanctioned by senior officials in the Trump administration and even the President himself.

July 1, 2020 – Trump and Q on the Invisible Enemy – the Extraterrestrial Factor

September 22, 2018 – Is Kavanaugh Confirmation being Sabotaged to Delay Military Trials of Deep State?

July 28, 2018 – QAnon Unmasks Britain as State Actor that Interfered in US Presidential Election

May 2, 2018 – QAnon Reveals Effort to Frame Russia in False Flag Nuclear Attack on US – the Fourth Reich Connection

April 21, 2018 –  QAnon on the Rothschild, Saudi & Soros Puppet Masters behind the Deep State

April 12, 2018 – QAnon is US Military Intelligence that recruited Trump for President to prevent Coup D’etat