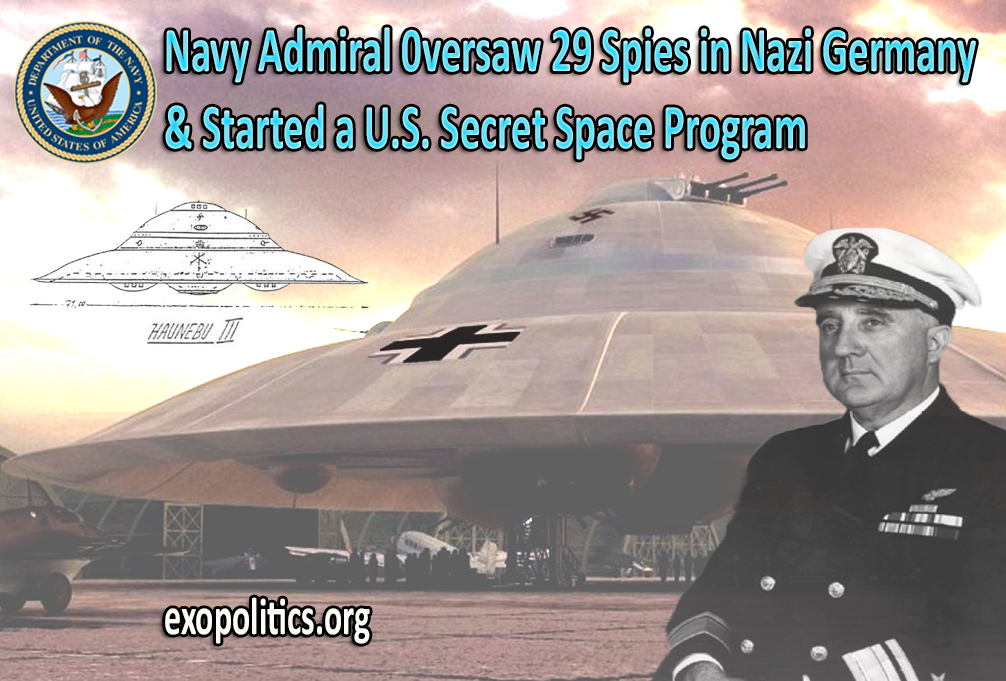 Rear Admiral Rico Botta was an extremely busy man during World War II. In addition to his official daytime naval duty as “Assembly and Repair Officer” at Naval Air Station, San Diego, in the evenings he led a covert Navy program operating with 29 spies embedded in Nazi Germany’s most advanced aerospace programs which were developing antigravity flying saucers.

According to retired aerospace engineer, William Tompkins; from 1942 to 1946, Admiral Botta seamlessly performed his official and covert Navy duties. The covert program learned from the Navy operatives (Lieutenants in rank) that the Nazis had developed up to 30 prototypes of antigravity craft, some of which were capable of space flight. It was Admiral Botta’s duty to understand both the war and post-war potential of the Nazi aerospace programs, and disseminate the relevant technical information acquired by the spies to his Navy superiors, and also select U.S. aerospace companies, think tanks and government laboratories.

Tompkins job was to assist Admiral Botta by physically taking the briefing packages created during the covert program to organizations with the technical expertise to understand the Nazi designs and prototypes, assess their feasibility, and incorporate them into the war effort, if possible.

Tompkins did this approximately 1200 times. Each late night debriefing session was run by the Admiral, with one or more out of a pool of three Navy captains in attendance, along with Tompkins and a stenographer to record the sessions.

After the official end of WWII, Botta went on to play a key role in starting a U.S. Navy led secret space program filling a number of positions until his final “official” assignment at Naval Air Material Center, Philadelphia, from 1950 until his retirement in 1952. Admiral Botta’s covert program was first publicly revealed in December 2015 by Tompkins in his book, Selected by Extraterrestrials.

Here Tompkins released a document  revealing his mission orders as a Disseminator of Naval Aircraft Research and Information, and explained how he would deliver briefing packages to various aerospace organizations. Tompkins also released a document issued by Navy Secretary James Forrestal, which formalized the technology acquisition program headed by Admiral Botta within the newly created Office of Research and Inventions on May 19, 1945. Yet more documents he released are two exit passes signed by Admiral Botta, which gave Tompkins permission to exit the Naval facility with his “briefing packages.”

These two exit passes confirm Admiral Botta’s direct role in the covert Navy program. It is hard evidence that Botta was leading a covert program at Naval Air Station, San Diego, which was authorized by Secretary Forrestal, as Tompkins has claimed.

Confirming Botta’s role in the covert program described by Tompkins has been elusive up until recently. Botta’s background and expertise would remain a mystery until researchers at Rense.com combined their efforts to find an official biography on him.

This occurrence, five years after the Golden Eagles website first appeared in 2011, is oddly coincidental, and suggestive of “official approval” for the release of Botta’s biography into the public arena.

Despite the curious timing of its release, there is no reason to question the accuracy of Botta’s biographical details as found on the Golden Eagles website.

Evaluating Admiral Botta’s various commands and expertise will help considerably in determining whether or not he was capable of running the covert Navy Spy program alleged by Tompkins, and whether Tompkins testimony itself is credible.

One of the first issues to address about Admiral Botta’s background is his rank while stationed at Naval Air Station, San Diego. His official position as “Assembly and Repair Officer” in normal circumstances would be filled by a Captain.

This is confirmed in the citation for his award of the “Legion of Merit” after WWII for his time at San Diego:

The President of the United States of America takes pleasure in presenting the Legion of Merit to Captain Rico Botta, United States Navy, for exceptionally meritorious conduct in the performance of outstanding services to the Government of the United States as the Assembly and Repair Officer, U.S. Naval Air Station, San Diego, California from 31 December 1942 to the termination of hostilities in August 1945. Yet, on January 11, 1946, after the award of his Legion of Merit, Botta was retroactively promoted to Rear Admiral, spanning back to June 30, 1943. The Congressional record refers to the retroactive promotion due to a temporary assignment which meant that his position as ‘Assembly and Repair Officer” had aquired flag officer responsibilities.

It’s feasible that his temporary appointment as Admiral was due to the wartime responsibility of “Assembly and Repair Officer” expanding significantly beyond the normal command level involved during peacetime operations. This is certainly the view of WWII historians such as Ken McCanliss, who points out that Botta is among “a list of 58 Navy flag officers who were given retroactive promotions reflecting war time rank.”

It’s also possible that his temporary rank of Rear Admiral was due to him performing additional duties of extreme importance to the Navy, commensurate with the rank of Rear Admiral. This is what Tompkins’ two May 1945 documents suggest in terms of a covert technology acquisition program that reported directly to Secretary Forrestal.

According to Tompkins, Forrestal directly intervened in ensuring Botta’s temporary promotion to Rear Admiral since that was required for the covert program that Botta would head. It would certainly make a difference for Tompkins’ briefing packages to be taken seriously if he was working for a Rear Admiral, rather than a Navy Captain, when he delivered them to leading aerospace companies.

Furthermore, Botta’s background as an Australian citizen (he emigrated to the U.S. in 1908 at age 18), and not being a graduate of the U.S. Naval Academy, would likely have created additional hurdles to advancement to flag officer rank.

Botta’s promotion supports Tompkins claim that in addition to Botta’s official “daytime” duties, he also performed covert duties at night, in running the Navy spy program out of Nazi Germany, which required a flag officer to be in command. It’s worth emphasizing that Tompkins recalls that when he began working under Botta in 1942, the latter wore the uniform of an admiral.

We can now examine some of Botta’s other Naval assignments to assess whether he was capable of running a covert espionage program out of Germany to learn about its aerospace secrets.

According to his biography, Botta worked for the Bureau of Aeronautics for two periods. First from 1921 to 1924, and the second time from 1937 to 1942. During his second stint, he worked in the Engineering Division Material Branch and later was the head of the Power Plant Design Section.

Here is what we know of the Bureau of Aeronautics from Wikipedia:

The Bureau of Aeronautics (BuAer) was the U.S. Navy’s material-support organization for naval aviation from 1921 to 1959. The bureau had “cognizance” (i.e., responsibility) for the design, procurement, and support of Naval aircraft and related systems.

These two assignments confirm that in 1942, Admiral Botta had nearly nine year’s experience in a variety of areas associated with aircraft engineering, design and power supply. This had contributed to him developing a “superior and outstanding technical knowledge” as described in his “Legion of Merit” citation:

Captain Botta, by his superior and outstanding technical knowledge and skill, his great administrative ability and his constant devotion to duty enabled this Department to meet the ever increasing demands of the Fleet Air commands for combat aircraft of the latest type and with the latest combat-proved changes installed.

The citation is consistent with what Tompkins claims Botta was doing at the Naval Air Station with the covert operatives in Nazi Germany. It refers to Botta learning about the “latest type” of combat aircraft and changes to improve combat readiness for US Navy aircraft.

Consequently, if the Navy had spies embedded in Nazi Germany, then Admiral Botta would have been an ideal choice as someone who could debrief them, adequately assess the technical information involved, and pass on relevant information to select aerospace companies and think tanks for further study and development, as Tompkins contends.

Admiral Botta’s career after WWII took him into positions that were directly involved in the study of antigravity technology that could help start a US Navy secret space program.

On July 1, 1950, Botta became the commander of the Naval Air Material Center, suggesting that he would be assisting it with developing experimental aerospace technologies, especially with regard to antigravity technologies.

Here is what was publicly known about experimental aviation projects at the Naval Air Material Center in 1944: When Admiral Botta took over command of the Naval Air Material Center on July 1, 1950, he was in charge of a facility that was capable of running up to a 1000 experimental aviation projects. Not only is this powerful confirmation that Botta had the expertise to run a covert program with 29 operatives embedded in Nazi Germany’s secret aerospace programs, but also that he continued to work on such projects well into the 1950’s.

His [Botta’s] leadership likely helped the Navy to lead in the development of disk craft and spaceships.

Tompkins claims that while employed at the Advanced Design think tank at Douglas Aircraft Company from 1951 to 1961, he worked on unsolicited proposals sent to the U.S. Navy for kilometers-long antigravity spacecraft. This suggests that Tompkins’ proposals were assessed and developed, at least up to 1952, at the Naval Air Material Center run by his former boss, Admiral Botta.

A review of Admiral Botta’s expertise, experience and military commands shows that it is very feasible that he ran a covert Navy operation out of Naval Air Station, San Diego, from 1942 to 1946, as Tompkins claims. Furthermore, Botta’s post WWII assignments suggest that he continued to work on Navy aerospace projects associated with the antigravity space craft first developed by Nazi Germany.

It can be reasonably concluded that not only did Admiral Botta run a covert espionage program during World War II learning about Nazi Germany’s successful development of antigravity space craft, but he also played a leading role in developing similar craft for the U.S. Navy.

Consequently, a review of Admiral Botta’s background supports Tompkins claims that he (Tompkins) was directly involved in a covert Navy espionage program that learned about Nazi Germany’s antigravity secrets, and passed these on to senior officials and leading aerospace companies, for the development of a secret space program run by the U.S. Navy.