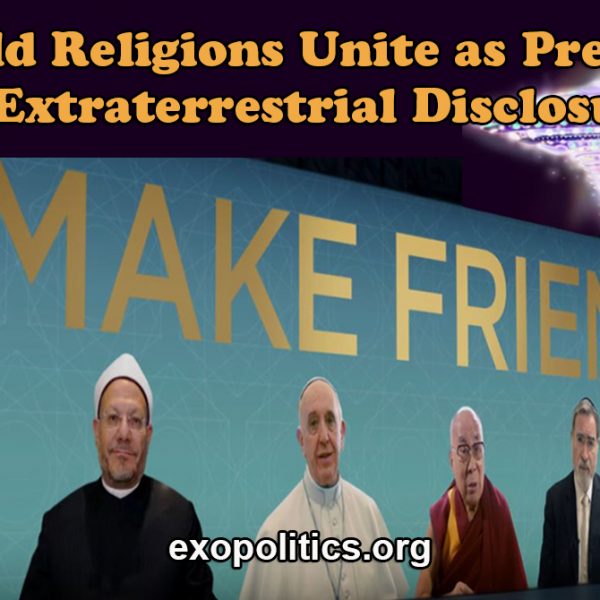 Leaders from a diverse collection of religious communities issued an extraordinary statement for world unity in a video message released last week. The call to world unity is a prelude to disclosure of extraterrestrial life according to independent sources working with secret space program whistleblower, Corey Goode.

The world religious leaders came together on June 14 to make a joint statement through a video calling on people to embrace ideas of friendship and unity, and to overcome negativity and division in society. It is available in 16 languages and features leaders from Buddhism, Hinduism, Christianity, Islam, Judaism and other faiths.

Each of the leaders contributed a personal statement for the exclusive purpose of creating this joint appeal. Ayatollah Al-Milani advises people to make friends with followers of all religions. Patriarch Bartholomew calls on the world to “recognize the beauty of God in every living human being”. Pope Francis and Rabbi Abraham Skorka demonstrate how their religious experiences have been enriched by their interfaith friendship. Grand Mufti of Egypt Shawki Allam stresses not to focus on differences between religious groups. The Dalai Lama calls for a deepening of spiritual friendship. Rabbi Jonathan Sacks says “One of the wonderful things about spending time with people completely unlike you is that you discover how much you have in common. The same fears, hopes and concerns.” Archbishop of the Church of Sweden Antje Jackelén stresses the importance for society: “This should start a process that will take prejudices away and where new insights and hope is born.” The Archbishop of Canterbury adds that “It’s not complicated, start with sharing what we all share, which is the pleasure of conversation.”

The joint statement by world religious leaders for unity and friendship across diverse faiths is a very important message in its own right. What lends this message added significance is recent information received by Corey Goode from two separate sources concerning the role of a positive group of human-looking extraterrestrials in promoting world unity and disclosure.

On June 15 Goode says that he had an encounter with “Ka Aree”, a representative of an inner Earth advanced civilization called the Anshar. She told him that a human looking group of extraterrestrials is working with the Vatican and other religious leaders to bring about disclosure. In a personal skype message on June 21, Goode gave me some background:

Ka Aree stated recently that 4 [extraterrestrial] groups had decided they would no longer abide by the M [Muhammad] Accords. They would begin a slow process of contacting people via dreams and then lead up to more open contact. A “Nordic” looking group is said to be leading this effort.

Goode has earlier described the “Muhammad Accords” as an extraterrestrial treaty negotiated around the seventh century AD, whereby all alien groups agreed to stop openly revealing themselves to humanity and to only work in the background to secretly influence global elites. It should be noted that the “Muhammed Accords” do not directly relate to the Prophet Muhammed (570-632), but were reached during the period when Islam was first established by him.

Goode is essentially saying that four groups of extraterrestrials are now committed to open contact with humanity, and have started the process to make this a reality. World religious leaders have been contacted to act as intermediaries to introduce humanity to the extraterrestrials, and in particular the Nordic race.

Goode says that he was given by Ka Aree two versions of how open contact would happen: Goode says that the extraterrestrial disclosure announcement “sounds very imminent”, but cautions that this is not the first time such an announcement has been planned by the Vatican, and might still require a few years. He says that an earlier attempt was made in 2008, which coincides with the Vatican’s chief astronomer Gabriel Funes making statements about extraterrestrials in an interview titled: “The Alien is my Brother.”

Goode said that similar information about Nordic extraterrestrials being involved in a contact initiative with major religious groups had been earlier given to him by two airmen working with a US Air Force run Secret Space Program, which works with prominent members of the intelligence community including the Defense Intelligence Agency.

It is more than coincidental that in the June 13 leak of an alleged Majestic-12 document authored by the Defense Intelligence Agency, prominence is given to human looking extraterrestrials in conducing diplomatic relations with humanity. The document said:

There are several variations more-or-less like ourselves. The majority of these are friendly and are the bulk of our EBE contacts. Most have a high degree of psychic ability and all use science and engineering of an advanced nature.

It is worth emphasizing that this alleged Defense Intelligence Agency document was leaked on virtually the same day of the world religious leaders’ unity statement – another coincidence?

While the Majestic document is currently the subject of hot debate, with several UFO researchers calling it a hoax, other prominent researchers such as Dr. Robert Wood and Stanton Friedman believe the document shows no sign of forgery and is worth serious investigation.

In my own research of the document’s content, there is much there which is consistent with historical records, and provides an important overview of recent human interaction with extraterrestrials dating back to Nikola Tesla’s radio experiments in the late 1800’s. This suggests that the document contains genuine information despite anomalies in formatting and classification markings as critics have pointed out.

According to Goode, the Nordic extraterrestrials outreach with religious leaders is likely to lead to the birth of a new global religion: “It is FULLY expected that over 90% of people of Earth will adopt this new ET Religion without question.”

This is likely to lead to some controversy given the work of others such as Chris Putnam and Tom Horn who have been warning against the Vatican’s quiet preparations for open contact with extraterrestrials. In their 2013 book, Exo-Vaticana they do not consider the human-looking extraterrestrials who would be revealed in such an announcement by the Vatican as positive at all – they claim them to be demons in disguise.

In a lengthy review of Exo-Vaticana, I wrote about the danger of viewing extraterrestrials in this way using a myopic interpretation of biblical scripture:

Exo-Vaticana is dangerous insofar as Putnam and Horn undergird it with some powerful religious prejudices about the motivations of alien visitors to our world. They claim that biblical scripture is a solid foundation for understanding that aliens are demonic entities who destructively intervened in human history, and are about to return and do so again. In contrast, according to Putnam and Horn, Pope Francis I is preparing to lead the Catholic Church to embrace the returning/visiting aliens as “brothers in Christ” – reflective of the 1950s and 1960s contactee reports of benevolent “space brothers.”

Putnam and Horn’s misgivings about welcoming extraterrestrials stems from a profound misunderstanding of the full spectrum of their motivations and activities, which I have described at length in my 2013 book, Galactic Diplomacy: Getting to Yes with ET. Thankfully, the recently leaked Majestic document indicates that military officials are well aware that most alien visitors are friendly, and capable of becoming important allies for humanity’s evolution into a galactic society.

It is a very positive development for all humanity that prominent religious leaders made a major statement advocating friendship and unity across religious traditions. The possibility that this is a prelude for the Vatican announcing, in association with other major world religious leaders, the existence of friendly extraterrestrial visitors is something to be welcomed. If Goode’s sources are correct, then the June 14 statement for world unity takes us one step closer to disclosure of extraterrestrial life, and ending religious conflict on our planet.

[Many thanks to Stephen Cefalo and the Sphere Being Alliance for creating and giving permission to use the graphic representation of the Pope and the Nordic ET.]