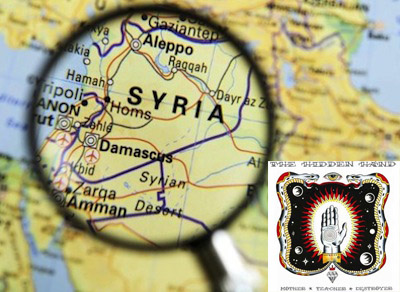 False Flag event in Syria: the Third Force and exopolitics This week President Barack Obama personally leads an attempt to persuade the US Congress to authorize a US militarily attack against the Syrian regime in response to a chemical weapons attack on rebel held areas in Damascus on August 21. Casualties range from 355 to 1729 dead, with three times as many being injured in the attack. Obama lays responsibility squarely at the regime of Bashar al-Assad.

Not so according to the majority of alternative media sources. The consensus that has quickly emerged is that it was Syrian rebels themselves that launched a chemical weapons attack on rebel held suburbs in Damascus Syria in a false flag attack to provoke Western military intervention.  What both President Obama’s administration and the alternative media are not considering is a shadowy “Third Force” operating in Syria. There is evidence that a “Third Force” is operating in Syria that plans to decimate Damascus for an otherworldly “exopolitical” agenda.

Let me begin by describing this shadowy “Third Force” which can also be described as the “Hidden Hand” of both world politics and the relatively new field of exopolitics. The “Hidden Hand Dialogue” is a set of questions and answers given by a self-described Illuminati insider and members of the Above Top Secret Forum that was recorded in October 2008. The insider responds to questions in a sincere and consistent way, and reveals valuable information about the secret control mechanisms used by an elite group of insiders s/he calls “The Family”. S/he wrote:

I am a generational member of a Ruling Bloodline Family… Our Lineage can be traced back beyond antiquity. From the earliest times of your recorded “history”, and beyond, our Family has been ‘directing’ the ‘play’ from behind the scenes, in one way or another.

Among the many insights s/he gives is that the leadership of the family is very much aligned with a group of extraterrestrials that has been on Earth for millennia:

I want to be clear on this Bloodline issue. The ones you know, they are of earthly lineage. Yes, they have their place in the Family, but the Real Power lines, do not originate from this planet.

This echoes the apocryphal Book of Epoch where a band of 200 fallen angels/extraterrestrials arrived on Earth and mate with humanity to create a new bloodline of ruling elites – the Nephilim.

Preston James has just written an article on Veteran’s Today describing the Luciferian extraterrestrial aspects of this “Third Force:”

Some credible insiders have claimed that most top world leaders have had to enter into a contract with the Third Force which is really lucifer, the fallen one, the great deceiver of mankind, who has presented himself as the Annunaki Master Controller Chief Alien ET which is claimed to be an an inter-generational, inter-dimensional entity that is manipulating the world according to his alien ET agenda.

The Hidden Hand gave detailed answers to questions, and made some predictions. Among these was the following: “Damascus, will be uninhabitable by the end of 2010, possibly even sooner…”

Significantly, Benjamin Fulford, a former Asia Pacific Bureau chief for Forbes Magazine, claims that someone with connections to what he describes as a “criminal cabal” made a threat in September 2011 that “Damascus would be made ‘uninhabitable.’”  There’s no evidence that Fulford was aware of what the Hidden Hand had predicted back in 2008, so it’s a curious coincidence that the same language was used for claiming that Damascus would become uninhabitable at some point by a mysterious group of individuals with great power behind the scenes.

In 2008, such a prediction appeared very fanciful, and indeed did not occur by the predicted date. Fulford’s similar prediction did not have a timeline but clearly suggested that the coming devastation was to be contrived by the Third Force/criminal cabal. Now, however, we are witnessing the Syrian capital of Damascus being slowly destroyed in an expanding civil war where indiscriminate aerial bombing and artillery force was initially used by the government as reported by independent organizations such as Amnesty International.

As the Assad regime continued its use of indiscriminate force to cow its opponents into submission and punish civilians supporting the opposition, it’s not unrealistic to assume that Assad would eventually resort to chemical weapons as he lost control of densely populated urban areas. In retaliation, rebel units could themselves use chemical weapons they have gained access to against regime forces and areas, as Assad’s regime is now claiming. If chemical weapons were used in a large scale in Syria’s capital by opposing forces, then Damascus could indeed become uninhabitable in the not too distant future.

The tide of the war, however, changed dramatically for the Assad regime with an influx of Hezbollah fighters from Lebanon and Quds Force volunteers from Iran. Cities and territory that had been held by rebel forces for months began to fall starting with the border town of Qusayr in April 2013.  So why would Assad resort now to the use of chemical weapons in Syria’s capital city?

He most likely didn’t as some press reports are now claiming. Nor is it feasible that the rebels themselves would target a rebel held area thereby dealing themselves a significant tactical military setback. The most likely culprit is therefore a shadowy Third Force calling itself “The Family” that desires to escalate the conflict in Syria and fulfill its own prophesy that Damascus would become uninhabitable.

The ultimate fate of Damascus will be a sign that the revelations of the Hidden Hand and Benjamin Fulford were accurate – the Earth has been controlled by a “Family” or “Criminal Cabal” of ruling bloodlines with enormous power behind the scenes that manipulates both sides in international conflicts. A book by William Bramley, the Gods of Eden, traces how the Third Force – he calls them “the custodians” – has historically manipulated both sides of conflicts to achieve its long term goals.

President Obama’s attempt to persuade the US Congress to authorize military force against Assad’s regime is facing heavy resistance and may fail. More people than ever have become educated by the alternative news media about false flag events, and strongly suspect that the chemical weapons attack in Ghouta, Damascus was indeed a false flag operation. It was not however an attack launched by the Assad regime or by the rebels who both had no clear interest in authorizing such an attack.

Instead, ultimate responsibility lies with the Third Force which explicitly mentioned years ago that Damascus would in future suffer from calamitous events that would make it uninhabitable. We are very likely witnessing the beginning of a chain of events that may fulfill this dire prophesy. However, the power of the alternative media to educate the general public about false flag events and a historic extraterrestrial presence (exopolitics) is a positive development. It may culminate in the planned chain of destructive events in Damascus involving chemical weapons and U.S. intervention not occurring. There is good reason to believe that the power of the Third Force to manipulate humanity’s fate is being increasingly exposed, and will eventually come to an end.