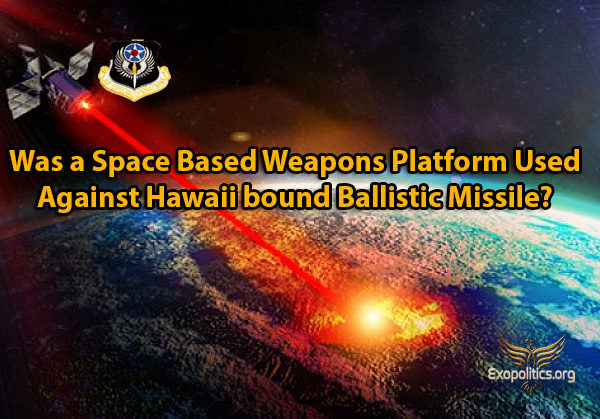 Was a Space Based Weapons Platform Used Against Hawaii bound Ballistic Missile?

On January 30, the Governor of Hawaii, David Ige, gave a press conference about the result of an official investigation into the January 13 ballistic missile alert that was an alleged false alarm. In the press conference Ige and other state officials gave a detailed account of the scenario that led to the false alarm.

While the official investigation concluded the emergency alert was a false alarm due to human error and a poorly designed reporting process, eyewitnesses continue to emerge saying they saw a meteorite, or something like it, exploding high in the sky over the Hawaii islands only minutes before the alert. Furthermore, eyewitnesses claim to have seen a television story about the exploding meteorite or object, before the news story was pulled.

In a video published on January 14, Marfoogle Watutu [a pseudonym] claims he was told by his sister, a Maui resident, about a tourist boat which carried multiple eyewitnesses to the exploding meteorite:

My sister has lived in Maui for eight years and what she is finding out is that a group of boaters that actually run a tour company say now that they saw something get blown out of the sky.

So, they said it looked like a meteor and then all of a sudden there was a big boom and it lit up the entire sky.  It was 8 o’clock in the morning. . .

Maybe this was not a drill after all.  Maybe our Boys in Blue and Boys in Green shot it down. And I would think that the U.S. would not want to cause more panic if they did try to launch something at Hawaii.  Then, of course, they would say it was a mistake.  They took responsibility very quickly that it was a mistake. . . This could be bullshit but I just had to relay that. . . [Transcription Source]

Apparently, some of the tourists were interviewed by a local news channel that aired these before the story was pulled.

Marfoogle has to date not released the names of any of the eyewitnesses or the tour boat company involved, making it difficult to confirm his story.  He claims that Joe Rogan, a former comedian who now hosts The Joe Rogan Experience, has contacted him and is contemplating doing a report on the incident, and that some of the names have been released to him.

However, in the 500+ comments to Marfoogle’s video (80,000+ views), several purport to be eyewitnesses to the exploding meteorite and/or the television news story. What follows are the relevant comments as they appeared on January 30, which cast light on what really happened

The following comments focus on an alleged KHON2 news story about the incident, the first of which refers to a tourist boat that was covered in the story and an exploding object. The above witnesses together, with anonymous sources cited in two previous articles, continue to raise the scenario of an intercepted ballistic missile attack, which is being officially covered up.

Multiple sources claiming that a ballistic nuclear missile had indeed been intercepted, and a cover up is underway were analyzed in my first article on the incident. My second article pointed to a rogue Deep State/CIA faction that may have used a boomer submarine to create a false flag attack, which was intended start a war with North Korea.

Given that the exercise was conducted less than three weeks since the January 13 incident, it is clear that the U.S. Navy currently does not currently have the capacity for reliably intercepting ballistic missiles.

The announcement of the failed exercise raises an intriguing question. Were U.S. Navy leaders signaling they were not responsible for shooting down the January 13 missile? So then, who did shoot down the ballistic missile?

My initial article focused on the likelihood of a secret space program run by the U.S. Air Force that used space based weapons technologies to shoot down the ballistic missile. Photos taken on October 23, 2017, showed a rectangular shaped UFO in the vicinity of MacDill Air Force Base, Tampa, Florida.

The photographer, JP (who I have known since 2008), claims he had been earlier taken inside the rectangle UFO, and had been informed that was a weapons platform. He says that he witnessed uniformed military personnel wearing the insignia of U.S. Air Force Special Operations who could operate the weapons system.

A Directed Energy Weapons system on a space based weapons platform could have the capacity to reliably shoot down a ballistic missile intended to simulate an attack from North Korea. Unlike anti-missile missiles used in the Navy’s Aegis defense system which have failed twice in two tests against simulated ballistic missile attacks, a Directed Energy Weapon could send a pulse of laser energy at the speed of light.

A Directed Energy Weapons could therefore easily intercept a ballistic missile in the terminal stage of its flight trajectory where it travels at hypersonic speeds (5x speed of sound). What gives further credence to the possibility that Maui residents and tourists witnessed a missile being shot down by a Space Based Directed Energy Weapon is the U.S. Air Force surveillance installation on the summit of Haleakala, Maui.

The capabilities of the Maui Space Surveillance Site (MSSS) is described by GlobalSecurity.org as follows:

… The site is the only one of its kind in the world, combining operational satellite tracking facilities (MOTIF and GEODSS) with a research and development facility (AMOS). The MSSS operates primarily at night, but performs many of its SOI missions 24 hours a day.

It is very likely that the Maui Space Surveillance Site was used in the tracking and/or shooting down of the ballistic missile. If so, this would help explain why many Maui residents saw the explosion. It was only during the final stage in the trajectory of the missile attack that a directed energy weapon system could have been used as the Maui facility could help accurately triangulate the missile’s position.

Further insight into what happened on the morning of January 13, comes from an anonymous Hickham Air Force Base source on duty at the time of the alert. S/he pointed out the great amount of confusion over the alert which was at different points considered a drill and then a genuine attack by U.S. Pacific Command personnel.

Significantly, s/he points out it was only after a request for a military response to the presumed attacker, North Korea, was declined by the White House that Hawaii local authorities were instructed to say it was all a false alarm.

The confusion over the missile alert being a drill or genuine has the tell-tale characteristics of a false flag attack. Similar confusion has occurred in past false flag events on September 11, 2001 (New York) and July 7, 2005 (London), etc. In these alleged terrorist attacks, military and government authorities were first told about a drill where security forces were instructed to stand down, and then informed that a real attack was occurring by which time it was too late to prevent.

Analysis of this pattern in past alleged false flag attacks has led to the following observation:

The exercise or drill – at the same time, at the same place – has became the sine non qua or indispensable element of the recent false flag operation.

In the Hawaii situation, it appears that cool heads at the White House did not order military retaliation against North Korea after the missile was shot down. President Trump and/or his national security advisors likely suspected that a false flag attack had been attempted.

According to my own efforts to find Hawaii residents willing to testify about witnessing a high altitude object being destroyed, I have been told that police and other authorities are intimidating witnesses into silence.

Consequently, in contrast to the official State of Hawaii report that the January 13 event was a false alarm due to human error, the following conclusions can be offered.

First, a ballistic missile likely carrying a nuclear warhead was destroyed during the final stage of its trajectory by a USAF Secret Space Program using space based Directed Energy Weapons deployed on rectangular shaped weapons platforms.

Second, the Maui Space Surveillance Site helped in the tracking and destruction of the ballistic missile as it neared the Hawaiian Islands, the most likely target being Pearl Harbor, Honolulu.

Third, a drill was scheduled for the morning of January 13, which was intended to create confusion so that a ballistic missile attack could succeed, and the missile’s trajectory would point to North Korea as the culprit.

Fourth, the party responsible for the false flag attack is a rogue Deep State/CIA group with its own ballistic nuclear submarines, which are part of a secret Navy apparently called the Dark Fleet.

Fifth, the US Navy’s January 31 test was intended to let the general public know that it does not yet have the capability of intercepting ballistic missiles, and that the real heroes in tracking and intercepting the nuclear attack on Hawaii was USAF Special Operations.

Further information is needed to determine the accuracy of these conclusions. One thing is pretty clear at this point given the number of insider sources and witnesses that have come forward so far. The official State of Hawaii investigation is a cover-up for a ballistic missile attack, which evidence suggests was a false flag attack using one or more nuclear weapons by a mysterious naval force desiring to start a regional nuclear war.

Thankfully, a classified space based weapons system was most likely used by the USAF Special Operations, thereby giving the U.S. national security planners time to develop an appropriate response to those behind the false flag attack.