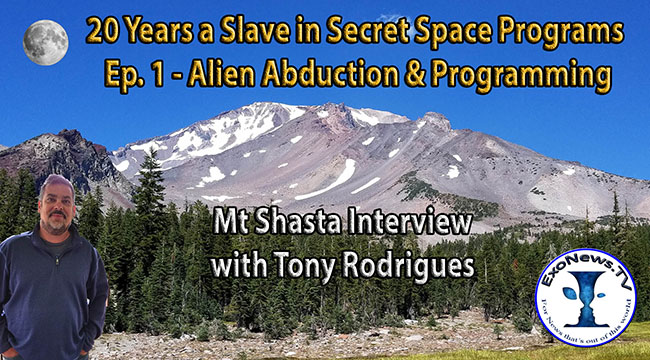 A new witness to secret space programs has publicly come forward to give details about how these programs operate in recruiting and treating personnel who are considered to be ‘slaves’ with no rights.

Tony Rodriques claims that in 1981, when only nine years old and in 4th grade, he was involuntarily recruited into a “twenty and back” program as punishment for something he did to one of his class room peers.

He publicly embarrassed the son of a high level member of the Illuminati and Rodrigues says that he was soon after abducted by five aliens. He was then genetically tested to determine what skills he possessed, which could be used in covert ‘support’ programs and eventually for the secret space programs themselves when he got older.

Rodrigues says that he was first forced to work as a psychic for a drug running operation out of Peru for four years, before being recruited as a sex worker in the area of Seattle from age 13. When he turned 16 years old, in 1988, he was taken to the Moon to be tested for any skills he possessed that would be of most benefit for service in the secret space programs.

After briefly serving on Mars as a slave fighter for a mercenary military force protecting corporate bases from indigenous Martians, he says was taken to Ceres, a planetoid in the asteroid belt, where he worked for 13 years with a German led freighter crew that was part of the “Dark Fleet,” which was initially set up by Nazi Germany during World War II.

I was first contacted by Rodrigues on August 15, 2015, and have spent more than a year vetting Tony’s testimony with the support of two other researchers, Morgan Starr and Rob Potter, who released the first audio interview of Rodrigues on Sept 23. Our conclusion is that Rodrigues is being truthful, sincere and consistent in describing events he recalls experiencing during a twenty and back secret space program.

Rodriges was publicly identified by Rob Potter on the last day of the Secret Space Program Conference held at Mount Shasta from August 26-28. I subsequently interviewed him for Exonews.TV from the speaker lodge at the conference on the morning of August 29.

In this first episode in a five part series on ExoNews TV, Rodrigues explains the event that led to his involuntary recruitment into a twenty and back program, and his first trip to the Moon in 1981.

In the next episode, we will learn what happened to Rodrigues when he was taken seven years later, in 1988, when he was 16, to the moon where he was trained for his first assignment for a secret space program with military and corporate facilities on Mars. 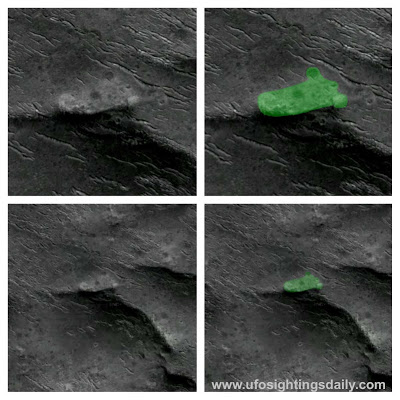 Is that a crashed UFO on Mars? An anomalous object has just been found on Mars that appears to be a crashed UFO lying just under the Martian dust. The object was discovered by Scott Waring using Google Mars Map which gives users the ability to examine the Martian surface using satellite imagery. In an announcement released today, Waring estimates it to be about 30 meters wide and 60 meters long. According to Waring, it has the shape of a “Star Wars land cruiser.”

Many anomalies that appear artificial have been found on Mars, and the moon for that matter, using NASA satellite imagery by Waring and other researchers. NASA scientists routinely attribute such anomalies to purely geological processes and don’t bother to investigate further their possible artificial nature citing mission priorities and costs. In the rare case of a public outcry as happened in the 1976 Viking Face on Mars controversy, NASA will schedule future missions to provide further satellite images that typically only raise further questions.

This is how Waring explains his Martian discovery:

I was looking over Google Mars and discovered what looks like the equivalent of the Star Wars land cruiser. You can make out the shape and structure very well and even the two vertical wings in back. Using Google Ruler I found that the craft is 61 meters from nose to end, 33.3 meters from tail to tail, 29.23 meters wide and 4.8 meters thick.

Here is what a Star Wars land cruiser looks like, it does have a striking resemblance to what Warring discovered.

Waring created a Youtube video using Google Mars Map where he zooms in on the object that certainly appears to be artificial in shape. Buried just under the Martian surface, it invites further investigation and analysis.

Don’t expect NASA scientists to rush to examine Waring’s claim by sending a rover mission to investigate. Maybe the secret Space Fleet that Gary McKinnon discovered by hacking into Pentagon computers and Ronald Reagan revealed in his memoirs, could investigate. If so, don’t expect the results to be announced anytime soon. Perhaps we will not have to wait too long, if Elon Musk succeeds in putting 80,000 colonists on Mars. Waring’s UFO crash may be just an unusual geological formation; or perhaps in a time long ago, there were “Star Wars land cruisers” racing over the Martian surface.