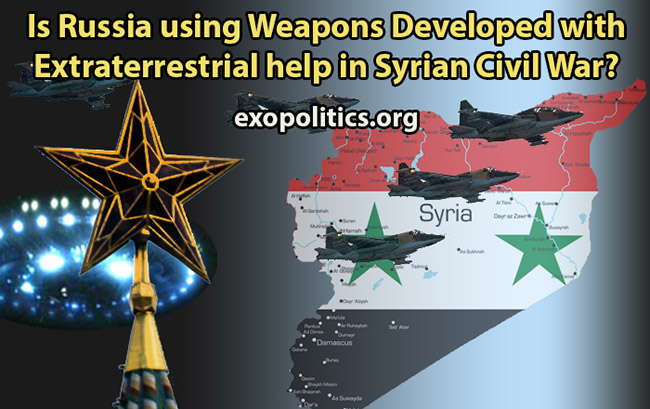 On October 14, Dr. Preston James, a columnist with Veterans Today, made startling claims about Russia using advanced weapons system developed through a secret agreement with extraterrestrial visitors in an article titled, “Putin’s Wild Card in Syria.”

James’ article analyses the game-changing nature of Putin’s military intervention in Syria, and the nature of the extraterrestrial inspired weapons systems used to devastating effect:

What exactly do the Russians now have as far as ultra high-tech weaponry? The list is long, but includes supersonic torpedoes, which create their own ability to travel through matter surrounding their path using inter-dimensional cloaking. Russia has missiles which, after launch, operate as if they are “hived” and use inter-dimensional entangled communication to evade interception, to regroup and to re-target, taking strange flight patterns which can change from straight to spirals to semi circles and more. Some insiders believe that the Russians now have the ability to generate inter-dimensional cloaking of some of their stealth aircraft and missiles, making them for the most part undetectable in flight and even shut-off spy satellites.

James’ analysis has some remarkable similarities to the claims of Corey Goode, whose whistleblower testimony concerning multiple secret space programs has been the focus of a recently published book, and an online television series.

James begins “Putin’s Wild Card in Syria” by distinguishing the sources he used from those making up the military intelligence community associated with Veterans Today:

Even though some of the Veterans Today Directors may have Beyond-black Secret Space War clearances, none of the Secret Space War material in this article was sourced by them or through them and comes from independent outside sources.

James does not name his outside sources, but they do not include Corey Goode, whose information differs in key ways. Yet when it comes to Putin’s role in dealing with an elite control group manipulating humanity and suppressing information about advanced technologies and extraterrestrial visitors, James’ and Goode’s information align closely. This is either a remarkable coincidence, or important corroboration that Putin has indeed reached agreements with extraterrestrial visitors, which have supplied advanced weapons technologies to the Russians.

James describes the elite control group and its influence in the Syrian Civil War as follows:

It is now clear to the whole world that ISIS, ISIL, Daesh, Al Qaeda and Al Nusra and the like are little more than paid mercenaries of the Israeli-American Terror Machine, and are synthetically-created, engineered and deployed Gladio-style terror, all done to further the NWO Globalist Agenda of the Rothschild Khazarian Mafia (*RKM).

According to James, the RKM is associated with a nefarious group of extraterrestrials called the “Dracos” or the “Draconians”:

The best information available suggests that the RKM is basically directed and energized by the Dracos, an incredibly evil race of cosmic predators that are large and powerful human inter-dimensional cosmic parasites that love to control, murder, torture and consume human flesh.

Goode similarly refers to the Draconians as secretly directing Earth’s elite control group, which he describes as the “Satanic/Luciferian Cabal.” Goode says that he and another whistleblower using the pseudonym, Lt. Col. Gonzales, have attended meetings with the Draconians organized by a positive group of military insiders called the “Secret Space Program Alliance”.

James refers to a Russian agreement with a positive group of extraterrestrials opposed to the Draconians and the Cabal/RKM:

Sources deep within Russia have reported that the Russian Federation has signed a treaty with a certain Alien ET group, and this particular Alien ET group has a long conflict with the a certain group that has allegedly been “advising and running” the top RKM Policy-makers who have served as their agent for taking over the whole world.

James goes on to say that the Russians have been given advanced weapons technologies by the positive extraterrestrial group that neutralize the best technologies available to the CIA/Mossad/Saudi equipped Islamic State groups backed by the Cabal/RKM:

At this time it is unknown what their long term agenda is, but so far they have equipped the Russian Federation with some astoundingly powerful weapons, especially ultra-high tech electronics which can temporarily shut off the electrical systems of whole ships or carriers and even aircraft and all group, air and satellite radar systems. Putin has allegedly been told that he should go ahead and checkmate the RKM and its Terrorists cutouts in Syria and Iran and not worry, because this Alien ET group now has his back.

James refers to an incident involving the U.S.S. Donald Cook as an example of these advanced extraterrestrial technologies being developed and used by the Russian military:

Some of Putin’s secret space war weapons are shocking in their actual capabilities. One was tested on an America ship, the USS Donald Cook, last April 2014. As two Russian fighters flew over, the ship’s electric supply was disrupted, shutting down all radar and Aegis defense systems. It was reported that the top officers were so upset that some of them resigned their commissions and left the Navy, feeling they could not even defend their own ships and crews anymore against such ultra high-tech weapons.

James information dovetails with Goode’s own revelations of Putin’s association with an “Earth Based Alliance” associated with the BRICS nations, which is dedicated to overturning the plans of the Illuminati/Cabal/RKM.

Putin and other elements of the “Earth Based Alliance” that make up the BRICS Alliance among others that dove tail together are all working for the common goal of defeating the “Satanic/Luciferian Cabal” that is now in control of the majority of the world and responsible for not only amazing deceptions of his and other countries populations but also some of the most horrific Crimes Against Humanity that have ever taken place in known history. There are many of these crimes that have become more and more known through recent disclosures behind the scenes. This has only caused these groups and people to want to bring down these Secret Earth Government Syndicates now more than ever.

Goode has said that during Putin’s ten day disappearance from March 6 to March 16, 2015, he or his representatives very likely attended a secret space program meeting held on the Moon where the use of advanced extraterrestrial technologies for defensive purposes was discussed:

The timing of his 10 day disappearance occurred exactly during the time of the SSP Alliance/Sphere Alliance Conference that was taking place on the LOC [Lunar Operations Command – a secret moonbase] along with many Earth Politicians (Non Cabal) and Regular Earth Citizens. I did not personally see him or have I been briefed that he was there. I was not involved in that portion of the conference. I do strongly suspect that he or his representatives were present.

Regarding the Donald Cook incident, Goode replied to the following question:

Q7. On April 12, 2014, the USS Donald Cook equipped with an Aegis Combat System was allegedly disabled by a Russian Su-24 tactical bomber deploying a sophisticated electronic jamming system. Was this an example of the kind of technological assistance given to Solar Warden and its earth allies to change the military/political balance of power on Earth?

[Goode] I have been told this is the case by several SSP Alliance members, but I have not seen any briefing reports personally to be able to vouch for that 100% myself. Other insiders have reported this as well so it is probably a safe speculation.

The last US Carrier group in the Mideast was called home, and this alone has confused many who thought the American nuclear carriers and their state-of-the-art Aegis missile defense shield were invincible and should stay put in order to stop ISIS…. . Some top weapons experts consider these carriers sitting ducks because of all the new Russian ultra high-tech weaponry recently deployed, which can temporarily deactivate their electrical supply systems and electronics, including their radar and sonar systems as well as their Aegis missile systems.

James concludes his article by claiming:

What few realize is that President Putin and the Russian Federation have now been “authorized” to checkmate the RKM in Syria and Iran and take it down if they don’t start backing down. Putin is also well aware that the RKM has infiltrated and hijacked much of the Pentagon and the US Administration, as well as NATO.

Preston James’ “Putin’s Wild Card in Syria,” contains incredible claims which lack the necessary corroborating hard evidence that many will demand to take it seriously. Yet his claims have remarkable similarities to those of another independent whistleblower, Corey Goode who has been rigorously investigated by several researchers and found to be very credible. Furthermore, the 2014 Donald Cook incident and the puzzling disappearance of all U.S. aircraft carriers from the Persian Gulf does lend support to James’ incredible claims.

If James and Goode are correct, then Russia’s military intervention in Syria using advanced technologies developed with extraterrestrial help is a game-changer. As James claims, it will checkmate the attempt by nihilistic forces (Cabal/RKM) to use Syria as a means of spreading discord and violence throughout the Middle East and beyond, and bring about a fulfillment of Biblical End Times prophesy.

Cabal/RKM control of the planet appears to be coming to an end with Putin’s bold intervention. If so, not only will Russia put an end to nefarious plans to bring about a fulfillment of a devastating End Times World War, but also vindicate famed American prophet Edgar Cayce who in 1935 predicted that Russia would, after the collapse of communism, become the “hope of the world.”