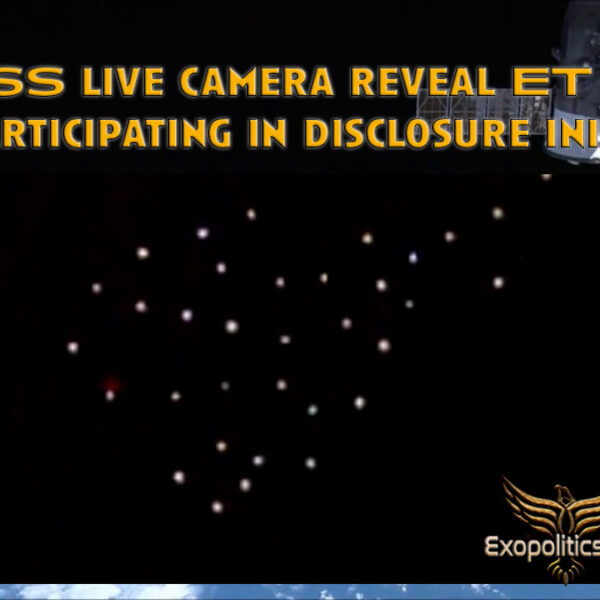 May 12, 2022Featured, science and technology

[See Update below] On May 6, a formation of more than 30 UFOs was captured by one of the live cameras of the International Space Station (ISS). The ISS HD Earth Viewing Experiment gives a spectacular high altitude live feed of Earth as the ISS orbits at an altitude of approximately 250 miles (400 km) at over 17,000 mph (27,600 km/h).

During the live feed a large formation of disk-shaped UFOs appeared and moved across the full visual field of the camera before disappearing. According to information received by Elena Danaan, a former professional French archeologist, the UFOs belong to cooperating extraterrestrial organizations that are part of an officially sanctioned disclosure plan being conducted with an Earth Alliance.

The founder of the UFO Sightings Daily website, Scott Warring, discovered the UFO fleet when he examined a newly indexed archive from the ISS HD Earth Viewing camera. He saw a fleet of over 30 disks in the ISS live cam and consequently made a video of it on May 8. The video clearly shows disk-shaped UFOs flying in formation not far below the ISS altitude.

When I saw the UFO formation, I first checked the NASA website to confirm that it was legitimate ISS footage taken by the HD Earth Viewing Experiment. The UFO fleet appears at the 1 hr 12 min mark of an official video archive maintained by the IBM corporation. The UFO fleet moved from right to left at a similar speed to the Earth’s rotation as typically seen from the ISS during daylight hours. This suggests the UFO formation was either stationary or traveling much slower than the ISS as both orbit around the Earth at differing altitudes.

The UFO formation is not a Starlink satellite convoy that follows a linear flight path similar to a train with carriages. In contrast, the UFO fleet flew in a rough arrow-head formation. More importantly, Starlink satellites orbit Earth at an altitude of 340 miles (550 km), meaning they would be orbiting above the ISS and could not be seen by the HD Earth Viewing camera, which is pointed downwards towards the Earth.

I asked Elena Danaan if her primary Galactic Federation of Worlds contact, Thor Han Eredyon, knew anything about the UFO formation. This was her answer:

Yes Michael, this is part of the disclosure plan with the GFW. Thor Han confirms it is one of their fleets, performing this in collaboration with the ISS. He asks to pay attention to the pattern. Remember, as I told you a few months ago, consequent to the arrival of the Intergalactic Confederation near Jupiter, it was decided that a disclosure plan would be put into action: the Earth Alliance in charge of disclosing documents, and the GFW & IC showing their ships increasingly to get civilians progressively used to the ET presence without causing chaos. He also says that the enemy will try everything they can to discredit this plan of action but will not manage to stop it.

I’ve discussed in previous articles information supplied by Elena Danaan and other credible sources, such as my US Army source, JP; Alex Collier; and James Gilliland, about fleets of spacecraft recently entering our solar system and parking themselves in the vicinity of Jupiter.

It was indeed revealed by Elena back on October 10, 2021, that spacecraft belonging to the Intergalactic Confederation would soon start moving towards Earth’s orbit. She quoted Thor Han who said:

The fleet from the Intergalactic Confederation has arrived in this star system. Their ships will be stationed around Jupiter for a while, until further notice to move nearer to Earth’s orbit.

The ISS live camera footage appears to corroborate that spacecraft belonging either to the Intergalactic Confederation or the Galactic Federation of Worlds have moved into Earth’s orbit and have begun revealing themselves.

Importantly, the craft are not being shot at by ground-based Directed Energy Weapons, which happened back in the infamous STS-48 incident in 1991. A live camera feed showed a UFO taking evasive action from what appeared to be a laser weapon shot from Earth.

The fact that such a formation could be photographed near the ISS and not be shot at suggests that the flying saucer formation is part of an officially sanctioned disclosure plan by an Earth Alliance.

Thor Han adds that the Earth Alliance will soon disclose information about TR-3b and retro-engineered technology. He adds that they will present it first as “defense secret programs” developed to protect the US from other nations’ attacks. The off-world programs will be revealed in a second part, later, at an unknown date, depending on when this first information will be “digested” by civilians.

It makes sense that the TR-3B would be the first antigravity spacecraft to be revealed to the general public as it is built using indigenous Earth technologies and can be easily explained as a product of human engineering. Measuring 600 feet in width, the equilateral triangle shaped TR-3B is a huge and impressive classified antigravity spacecraft that would shock the aerospace industry, which has not been informed of its existence over the last four decades.

The US Space Force and Space Command could officially unveil their TR-3B spacecraft to assure the public that the GPS satellite grid is protected from foreign attack at a time of great uncertainty caused by the Ukraine war. In addition, UAPs/UFOs have been categorized as a national security threat by the Office of the Director of National Intelligence leading to much speculation of a false flag alien attack being planned by the Deep State.

The unveiling of the TR-3B would set the stage for future disclosures of reverse engineered extraterrestrial spacecraft used in secret space programs belonging to members of the Earth Alliance.

While many fear a nuclear war may emerge due to NATO members increasing arm shipments into the Ukraine conflict, it is reassuring to know that there is secret cooperation by members of the Earth Alliance for disclosure of antigravity and off-world technologies. In addition, extraterrestrial civilizations are doing their part to awaken humanity by revealing their spacecraft through the ISS and other available means.

Video version of this article is on YouTube & Rumble

[May 12, 2022 Update – I found a plausible explanation for the above UFO fleet. Similar ISS video footage of UFO fleets prior to 2020 were analyzed in a video from May 2020 (click here). The analysis concluded the light formations are fleets of squid fishing boats using high powered lamps. While the 2020 video obviously didn’t cover the May 6, 2022, ISS footage, the similarity with early footage does raise the possibility that it is a fleet of squid fishing boats rather than UFOs/ET spacecraft]

[Note: My next webinar will be held on May 21 and is titled “Halls of Records, Space Portals, Inner Earth and our ET Heritage“. Please take a look at Webinar Trailer below which has just been released for more information.]