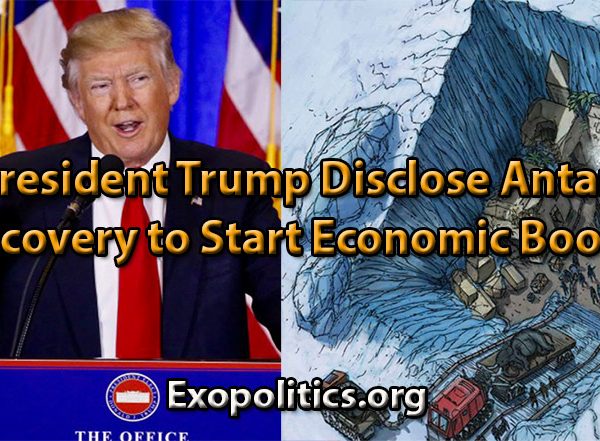 According to Secret Space Program whistleblower, Corey Goode, preparations have been underway since 2002 to publicly announce the discovery of a flash frozen civilization in Antarctica. Goode’s startling claim has received support from internet data mining expert, Cliff High, who, in a January 2017 report, refers to an economic boom caused by an Antarctica announcement in the next year or so.

Goode and High’s information leads to the intriguing possibility that President Donald Trump will authorize a major announcement about an Antarctica discovery in order to rejuvenate America’s manufacturing industry.

On December 11, 2016, Goode revealed that he had learned about a major excavation underway in Antarctica of a flash frozen civilization that was technologically highly advanced, and involved extraterrestrial life. He said that since 2002, teams of scientists and archeologists have been excavating the ruins which are buried under two miles of ice.

Critically, in early January 2017, Goode says he was taken to Antarctica to see the ruins for himself by an Inner Earth civilization he calls the “Anshar”. Goode said that bodies and artifacts that are extraterrestrial in origin were being removed and replaced by terrestrial objects from warehouses secretly located elsewhere around the planet. The goal appears to be one of both sanitizing the area of any extraterrestrial evidence, while seeding artifacts that steer scientific analysis towards a desired agenda. There have also been visits to locations near Antarctica by former presidents Barack Obama who traveled to Bariloche, Argentina, and Bill Clinton who visited Christchurch, New Zealand.

In prior years, other VIP visitors included Prince Harry of Great Britain (2013) and King Juan Carlos of Spain (2004).

Predictive Linguistics is the process of using computer software to aggregate vast amounts of written text from the internet by categories delineated by emotional content of the words and using the result to make forecasts based on the emotional ‘tone’ changes within the larger population. A form of ‘collective sub-conscious expression’ is a good way to think of it. Predictive linguistics can be used to forecast trends at many different levels, from the detail of sales to individuals, all the way up to forecasts about emerging global population trends.

High issues monthly reports called “Asymmetric Linguistic Trends Analysis Intelligence Report.” In his January 2017 Report titled “Sci-fi World” he had some very significant things to say about the global impact of a discovery in Antarctica:

Given Trump’s desire to revitalize the US manufacturing industry, it can be predicted that he would jump at the chance to roll out the Antarctica discovery during his administration once he is briefed about it.  This is consistent with High’s reference to an “economic boom period” and the release of technologies that will “transform humanity.”

High goes on to describe an ongoing debate over how much and when to release information about the Antarctica discovery:

There are a number of sets within the Antarctica and The Discovery sets that may be describing a ‘battle’ that is now, and will continue to take place over ‘how much’, and ‘if’, and ‘when’ the ‘information’ about The Discovery is to be ‘released’ into the wilds of humanity. However, the data is quite clear that the ‘arguing’ and ‘discord’ will all be ‘wasted time’ as it is describing ‘individuals’ who just ‘take it upon themselves’ to ‘awaken humanity’ with “The Discovery.”

High’s above analysis is very consistent with Goode’s report that the Antarctica discovery is on the verge of being publicly announced, and preparations for this have been underway since 2002.

High’s analysis further supports Goode’s earlier claims that elites are locked in fierce debates over how much and when to release advanced technologies that have been discovered, or developed in Secret Space Programs.

Finally, Goode’s account of his 2017 Antarctica visit is an example of High’s reference to “’individuals’ who just ‘take it upon themselves’ to ‘awaken humanity’ with ‘The Discovery'” in the case that official disclosure is unnecessarily delayed by disagreements.

A major question that arises is when and to what extent will Trump be briefed about such a discovery? An important clue is Secretary Kerry’s Antarctica visit during the 2016 Presidential election. While the visit was ostensibly for him to learn about global environmental trends, it is clear that what he was witnessing had relevance for the U.S. elections then underway. Kerry or the US State Department officials who accompanied him will eventually brief Kerry’s successor, Rex Tillerson, who on January 23 received a close Senate Committee vote of approval, and this week is scheduled to be officially confirmed as the next Secretary of State. Once Tillerson is briefed about the Antarctica discovery, he will pass on the information to Trump and his National Security Council.

Significantly, Trump issued a Presidential Memorandum on January 28 reorganizing the National Security Council which he chairs, and includes the Secretary of State.  In an unprecedented move, his reorganization included his chief strategist, Stephen Bannon, as a permanent member of the NSC.

Bannon in particular, is very likely the person who will most forcefully argue for disclosure of such information as a key element of Trump’s long term political and national security strategy once raised in any NSC meeting.

Given Trump’s stated policy objective of rejuvenating America’s industrial manufacturing capacities, it is highly unlikely that he would pass up the opportunity to initiate an industrial revival by officially disclosing the Antarctica discovery.

Consequently, it can be predicted with high confidence based on Goode’s revelations and High’s predictive linguistics model, that Trump will at some point in his Presidential administration disclose the discovery of a flash frozen civilization in Antarctica with advanced technologies. Not only will such an announcement stimulate an economic boom, it is also likely to open the door to an official disclosure process of even more advanced technologies used in secret space programs and visiting extraterrestrial life.