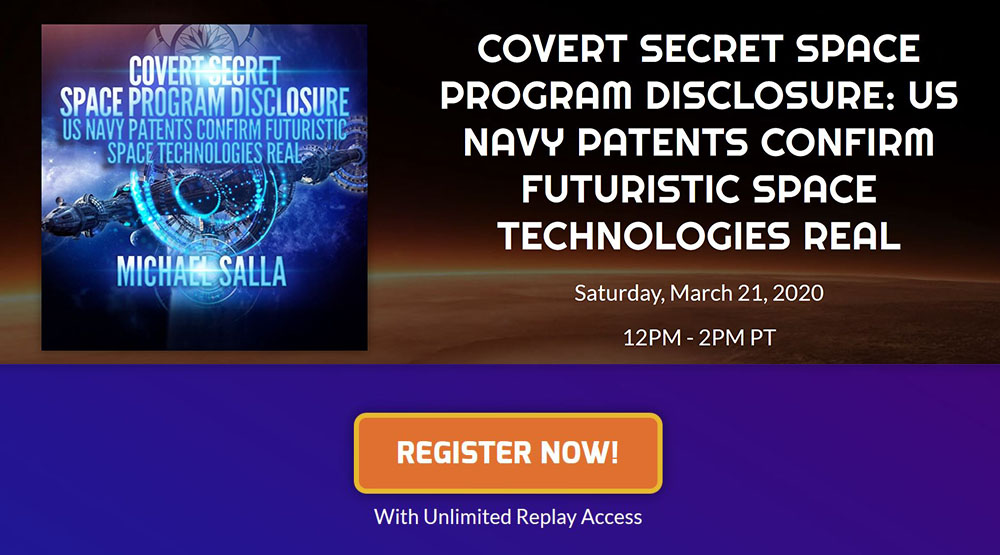 Written by admin on March 1, 2020. Posted in Announcements, Featured

Former Lockheed Skunkworks Chief Ben Rich said that it would take an “Act of God” to declassify black project technologies used within US secret space programs. Rather than attempt to declassify advanced technologies whose release can easily be blocked by government agencies opposed to disclosure, the US Navy is taking a novel disclosure approach. It is using the US Patent and Trademark Office to have patents published which are the blueprints for astonishing technologies long used in a Navy-run secret space program.

Undeniably, the information in these patents will enable the bravest and boldest minds to realize scientific marvels soon to benefit all humanity, finally breaking free of the closely guarded netherworld of special access programs and security clearances.

In this webinar, Dr. Michael Salla will reveal the different mind-blowing Navy patents that have been recently published, why such monumental secrets are finally coming to the light of day and how these patents connect to testimonies by multiple insiders who expose how the Navy first deployed its secret space program back in the 1970s.

Finally, Dr. Salla will explain why the Navy’s approach of helping the general public to “reinvent the wheel” of highly advanced space technology is a major step forward in the disclosure process, and what other dramatic events can be expected to take place next.