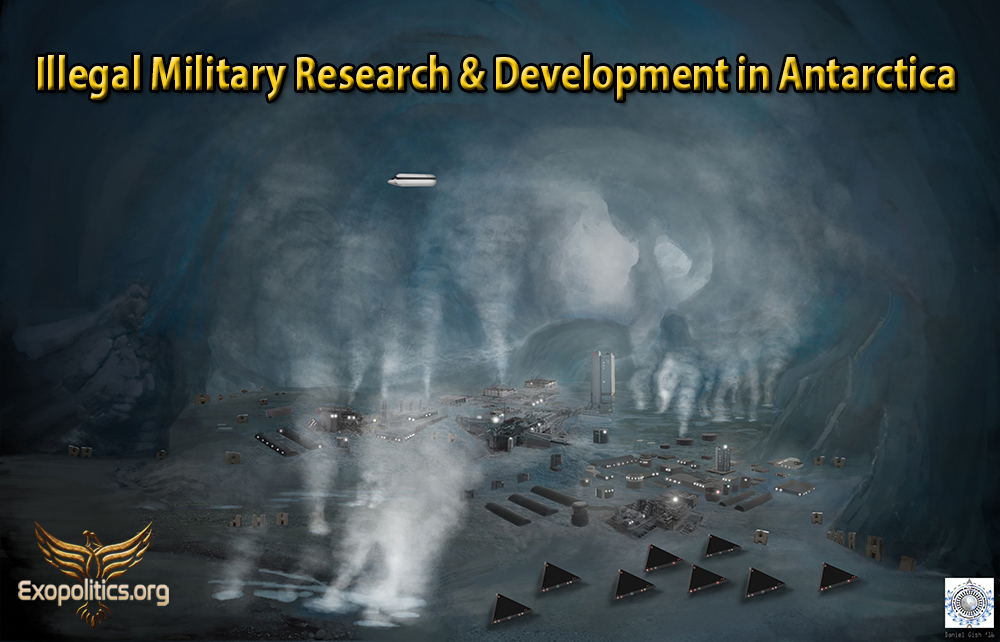 The U.S. military industrial complex has been conducting military research and development in Antarctica that grossly violates the 1961 Antarctic Treaty, according to secret space program insider Corey Goode. In previous updates he has described his two visits to Antarctica and the secret excavations occurring with an ancient civilization buried under the ice sheets.

Recently, scientists have confirmed the existence of networks of thermally heated caverns under the West Antarctic ice sheets and have speculated on the kind of life that could be supported there. These scientific announcements help corroborate Corey’s claims of extensive underground facilities that contain space ports, and are conducting military research and development there.

In this latest series of questions and answers, Corey describes the history of these Antarctica Treaty violations and how it began with a merging of the US military industrial complex with a German secret space program established in Antarctica during WWII.

Significantly, he refers for the first time to secret space ports and elite facilities built in Argentina and Brazil, which were first established as part of the German space program. These are now part of a corporate run space program he describes as the Interplanetary Corporate Conglomerate (ICC).

Most disturbing is Corey’s reference to the human rights abuses occurring in Antarctica under the illegal military research and development there by the U.S. military industrial complex, which is controlled by the ICC. He identifies Argentina and Mexico as additional locations where such abuses are occurring.

Questions for Corey Goode on Antarctica

MS – You say that Project Iceworm was a means for the US military to secretly place weapons systems in Antarctica. Were nuclear weapons included among the weapons eventually taken to Antarctica?

CG – Project Iceworm was originally developed to house ICBM bases in strategic regions across the Arctic and Antarctic. This project was also coopted to build research and development bases in the Antarctic for both military and military industrial complex entities to utilize for the development of highly unethical and illegal operations.

Nuclear weapons were indeed installed in these polar missile siloes. A number of ICBM’s that are currently deployed do not have nuclear warheads but do have kinetic weapons similar to the Rods from God. Each warhead carries up to 3 kinetic projectiles.

MS – What was the relationship between the US military and the German secret space program hidden under the Antarctic ice shelf after Project Iceworm? Was it collaboration or competition as a result of secret agreements reached with the Eisenhower Administration by the German SSP/Dark Fleet?

CG – The original German Secret Space Program was mostly cannibalized into the ICC and the MIC SSP. Remnants of the original German Secret Space Program are associated with the Dark Fleet who is mostly stationed outside our solar system and works closely with the Draco. The merging of the German Program with American Programs occurred almost immediately. The MIC SSP and groups that later became the ICC only began to build bases in Antarctica in earnest after the 1952 treaty that was signed between the US and the German Break Away Group.

MS – The Antarctic Treaty that came into effect in 1961 commits signatory nations to peaceful and scientific activities in Antarctica. In what ways is the Treaty being currently violated?

CG – Yes, this is one of the reasons I have been heavily leaned on to stop talking about the R&D Bases down there. I was told to focus on the ancient civilization that was located under the ice as well as the environments I encountered within the ice caverns that were created by geothermic energy.

As I was getting these warnings we began to see new information coming in about Antarctica that would give fertile ground to anyone who wanted to talk about finding unexpected things under the ice on this remote continent. We soon saw an announcement in the news about a University discovering unexpected ecosystems under the ice within these Ice Caverns. They mention that the temperatures in these ice caverns reach over 20 degrees Celsius allowing people to be comfortable in only tee-shirts.

I had also discussed that geothermic vents created giant ice caverns that often led up to holes on the surface that were natural heat vents. This to popped up in the news recently (also here)

We have also reported on excavations that are going on under the ice via steam and explosives that is destabilizing the major ice shelf in the region. I would expect that with the noted increase in geothermic activity along with the continued excavation beneath the ice, we will see more cracks and large sections of ice breaking off into the ocean.

MS -You have said that in 2016 you were given an aerial tour of up to six of Antarctica’s secret industrial facilities. Which of these are space ports used for the Dark Fleet and/or Interplanetary Corporate Conglomerate?

CG – I believe the major bases and under ice ports I saw were now mostly in control of the ICC who through its many tentacles controls other programs such as MIC SSP. MS – Are there Dark Fleet/ICC space ports in Argentina?

CG – Yes, I’m told there are minor space ports in Argentina and Brazil. I was told of one other location in South America that I cannot recall.

MS -What role does the town of Bariloche (which Presidents Eisenhower, Clinton and Obama have visited) play in the Dark Fleet/ICC program out of Argentina?

CG – I’m told that major meetings between various secret societies (Black Sun etc) and Nazi leaders have occurred there since the 1950’s. High level meetings are said to be held there to this day. I don’t have any other information than that.

MS -You have said that what is happening in Antarctica far exceeds alleged abuses at the secret Dulce underground base in New Mexico. What human rights violations and experiments are occurring at secret Antarctic bases?

CG – Yes, These R&D Bases do Nuclear, Biological and Radiation Experiments on Humans. There are a number of human cloning operations going on in these and other bases.

MS -Are such abuses also happening at the Argentina space port facilities?

CG – Absolutely, but to a much lesser degree. Similar bases have been reported in Mexico’s “zone of silence” area.

MS -What do you know about an elite bunker in Brazil and an underground network that extends north to the US and south to Antarctica?

CG – It was supposed to be a next generation bunker. Many of the previous bunkers had been compromised by the development of exotic weapons systems by the enemies of these Elite. This new bunker was to be extremely sophisticated and house many of the “True Elites”, not the figure head Elites we would be familiar with currently.

This base came to my attention originally in a report over a year ago that stated that supplies were being moved into this bunker at an alarming rate. About a year later I heard that these Elite were beginning to move their family members and personal possessions into this bunker.

During this time entire families would disappear from their homes. Relatives would file missing persons reports stating that the family had disappeared without a trace. When investigated it appeared that moving trucks had pulled up and loaded very quickly according to testimony from baffled neighbors.

Many of these families ended up in this and similar facilities. This all seems to be a part of a build up to something very big occurring on the surface of the Earth.

MS -What do you know of other NATO countries discoveries in Antarctica?

CG – Other NATO countries have made interesting discoveries. I am receiving information from NATO sources that a number of countries have not only made similar discoveries under the ice in Antarctica, but many of these countries are also conducting similar R&D in the region.

MS -What is the latest you have heard about the secret excavations in Antarctica of the buried Pre-Adamite civilization, and the Pre-Adamites still alive in stasis chambers in their mothership?

CG – I have not been briefed on the current status of the stasis chamber beings. I have received a few briefings on what was found under the ice. I reported most of that information in an online report as well as on Cosmic Disclosure.