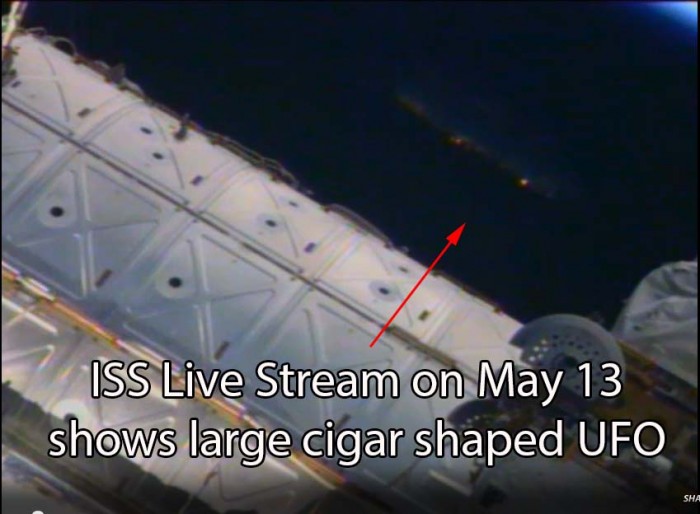 Is a giant cigar UFO hovering near the International Space Station?

Written by Dr Michael Salla on May 13, 2014. Posted in science and technology Video footage captured from the live camera stream of the International Space Station (ISS) shows what appears to be a giant cigar shaped UFO hovering nearby. The live footage was captured on May 13, 2014 and has been archived on the ISS video channel on Ustream. The UFO appears to have up to half a dozen orange lights flashing on and off in a random manner, and is stationary relative to the ISS though at some distance away. It appears for approximately seven minutes before fading away. The footage was taken by one of the ISS external cameras that are normally directed earthwards. The stationary nature of the UFO and the way it slowly disappears has led some to conclude it is little more than a lensflare. Not so according to Blake Cousins who was the first to upload a recording of the ISS live video feed on his popular YouTube channel, Thirdphaseofmoon. He along with a co-host believe the footage may be evidence of an alien mothership tracking the ISS.

The footage of the UFO has been given a preliminary examination by Cousins who enhanced the lighting and contrast to determine what kind of an object it is. His analysis suggests that it is a solid object and not a lensflare. If it is a genuine alien vehicle as Cousins contends, then it appears to be deliberatedly tracking the ISS. For what purpose?

This is not the first time that the ISS live camera feed has captured what appears to be a large UFO in the vicinity. Back on January 29, NASA live streaming showed what appeared to be a sleek elliptical UFO docked with the hull of the International Space Station. The object was between the Russian research module and the Soyuz escape capsule. Its size was approximately 10 meters. Some claimed that the UFO was related to an ISS ceremony featuring the Olympic flag. Yet the ISS ceremony was held in November 2013, and the flag was only about a meter in size, far smaller than the estimated 10 meter UFO.

Another incident on March 3 again recorded from the ISS live stream, showed a UFO again very close to the ISS. The UFO appeared different to the earlier January 29 incident. NASA’s response to public requests to explain the docked UFO incident and the March 3 incident involving the ISS was startling. NASA decided it would end ISS live streaming at the end of March. Only a public outcry thwarted the attempt to end ISS live streaming. On March 27, United Space Alliance, the NASA contractor that runs the ISS live stream, announced that the live streaming would continue. Perhaps alien spacecraft are visiting the ISS and NASA is trying to stop the public learning the truth. Alternatively, the ISS incidents may have more conventional explanations with the latest being little more than a lensflare. More detailed analysis of the latest ISS video footage will help us get a definitive answer one way or the other.