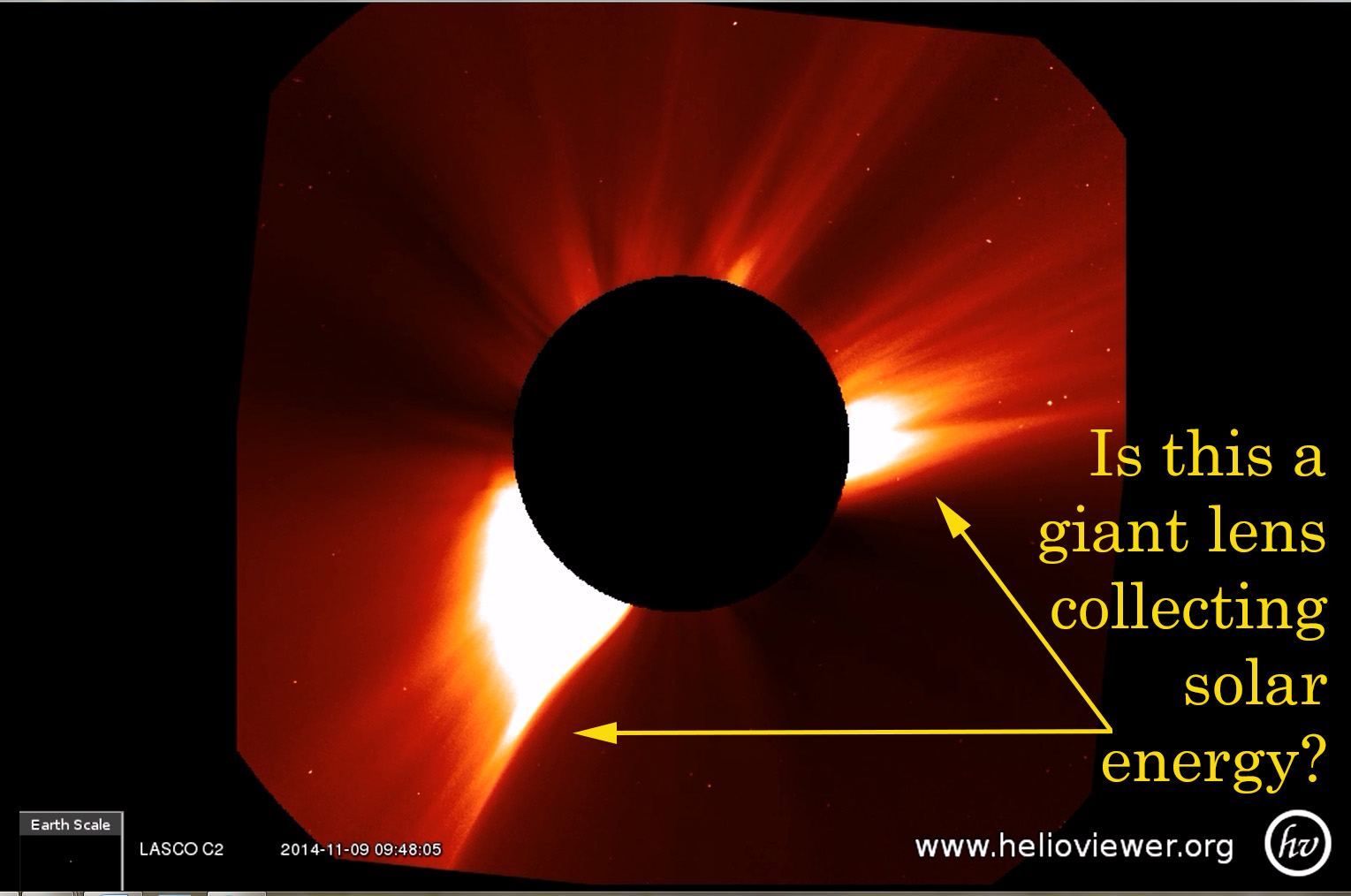 Written by Dr Michael Salla on November 10, 2014. Posted in science and technology Over a four day period up to November 9, NASA’s Solar and Heliospheric Observatory (SOHO) detected a strange area near the sun where solar activity was apparently being deflected or absorbed by an invisible object. According to two independent solar researchers in videos uploaded to Youtube on November 9 (see here and here), the affected area was due to a giant shield created by a UFO to protect itself from the sun’s energy. An alternative explanation is that the immense spherical lens shaped field was part of an advanced technology based on the principle of a “Dyson Sphere.” NASA’s SOHO images appear to be evidence of the sun’s energy being absorbed by a gigantic lens shaped solar collector whose approximate size is a mind staggering five times the sun’s diameter!

The solar images used to identify the alleged “UFO shield”or solar collector can be publicly downloaded from SOHO’s Large Angle and Spectrometric Coronagraph (LASCO). Video data from the LASCO C2 (orange) and C3 (blue) reveals that from November 6-9, an area to the lower right of the sun appears to not have any solar activity while areas around the rest of the sun do so. Either the sun’s energy is being deflected back from the region by a “UFO shield” or absorbed by a giant lens of tremendous size – dwarfing the sun in comparison. The sheer size of the affected area, suggests that the hemispheric object was designed to absorb solar energy towards, rather than deflecting it away from, a UFO at the center of the hemisphere. A close inspection of the LASCO C2 (orange) film footage, in particular, suggests the sun’s activity is actually being absorbed, rather than deflected, by a giant hemispheric lens of some kind.

The idea of an invisible giant hemispheric shaped solar collector is consistent with the development of a new generation of solar panel collectors that are spherical in design and use glass. One of these is called the “Rawlemon Spherical Solar Energy Generator” which is described as follows:

… the Rawlemon design uses a spherical lens to concentrate sunlight on a small photovoltaic panel and combines this with a dual-axis pivot that tracks the movement of the sun. According to the designer the transparent sphere is able collect and concentrate diffuse where traditional devices cannot and as well as providing an efficiency boost, they can be used in far more locations than their flat, fixed counterparts. It’s also claimed that by concentrating the sun’s light in one area, the Rawlemon design reduces the solar cell surface required to just 1 percent of that required by a traditional panel.

Could something similar to the “Rawlemon Generator” be designed on a much larger scale for collecting solar energy by an advanced extraterrestrial civilization?

According to Freeman Dyson, a celebrated astrophysicist, a Type II extraterrestrial civilization would have the advanced technology to harness solar activity on a grand scale. A Dyson sphere, for example, could be constructed around a sun to collect solar energy in ways similar to how humanity harnesses hydro power, through water channels and dams. While a Dyson Sphere is theorized to be big enough to encircle a sun, similar principles could be used for a giant “Rawlemon Generator” type solar collector where a spherical glass lens could be pointed towards a sun. This can be best described as a “Dyson Lens.”

In an earlier live NASA streaming incident from August 2014 involving the STEREO A satellite, a UFO with an apparent spherical lens trailing behind it, is moving past the orbit of Venus. The UFO appears to be using the lens, which is approximately four times the diameter of Venus, to absorb the sun’s energy over a six day period from August 3 – 9.  The August incident provides stunning video evidence of what appears to be a “Dyson Lens” being used by a UFO belonging to a Type II extraterrestrial civilization. It supports the evidence that the object captured by SOHO over the August 6-9 period is in fact a highly advanced solar collector as much as five times the sun’s diameter.

Over the last decade, live streaming from NASA and other national space agencies has provided remarkable evidence that we are not alone in the universe. UFOs have been regularly photographed and filmed in close proximity to the International Space Station, Moon, Mars and other celestial bodies, Rarely, however, has live streaming video captured evidence that answers the question, how advanced is the technology used by UFOs? Do we now have compelling data to answer this question? Is the answer much more than we ever bargained for, and preparing us to think in much bigger terms with our future inevitably leading to contact?