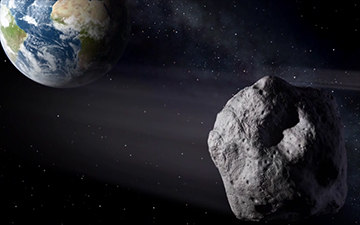 Will asteroids replace terrorism as the new global threat?

Written by Dr Michael Salla on February 11, 2013. Posted in science and technology An incoming asteroid scheduled to pass Earth this coming Friday February 15 is generating much press attention as a new kind of threat facing humanity. At its closest approach Asteroid 2012 DA14 which is 150 feet long, will be 17,200 miles from the Earth. Less than 1/10 the distance to the moon, and within the outer orbits of communication and weather satellites. That qualifies as a very near miss in astronomical terms. In a NASA media teleconference held last Thursday, the consequences of an impact (which NASA emphasized would not happen this time) would be similar to the 1908 Tunguska event where a forest area of 750 square miles was destroyed in Siberia. In a CNN video interview held yesterday, the head of the Planetary Society, Bill Nye, emphasized that a large metropolitan area such as Atlanta, Boston or New York would be obliterated by an impact of something similar in size to Asteroid 2012 DA14. NASA pointed out that only 1% of asteroids the size of 2012 DA14 have been discovered. Presently, there is no effective global defense system against incoming asteroids. Critics claim that NASA is deliberatedly hyping the global threat posed by asteroids as part of a secret strategy to weaponize space. Is the media attention over Asteroid DA14 justified, or is increasing media interest part of an orchestrated secret strategy where asteroids replace terrorism as the preeminent global threat?

In Thursday’s media teleconference, NASA emphasized that the asteroid will definitely miss the Earth. It was pointed out that the Earth may not be as fortunate in future since only 1% of asteroids of similar size are known by NASA’s Near Earth Object Program. An asteroid the size of 2012 DA14, if it impacted, would be similar to the Tungaska event of 1908, according to NASA scientists and cause regional devastation. NASA’s Near Earth Object Program has a 20 million dollar budget, and lacks funding to track all near Earth objects. NASA relies on astronomers at various public and private observatories around the world to find and track asteroids such as 2012 DA14 which was discovered on February 23, 2012.

At the NASA media teleconference, NEO program scientists including its Program Manager and Chief Scientist, Dr Donald Yeomans from the Jet Propulsion Laboratory gave further details and answered questions about Asteroid 2012 DA14. Yeoman and his colleagues also gave responses to submitted questions prior to the media teleconference. In response to the question, “What would happen if DA14 were to impact Earth?” they explained:

Asteroid 2012 DA14 will not impact Earth, but if another asteroid of a size similar to that of 2012 DA14 (about 150 feet across) were to impact Earth, it would release approximately 2.5 megatons of energy in the atmosphere and would be expected to cause regional devastation. A comparison to the impact potential of an asteroid the size of 2012 DA14 could be made to the impact of a near-Earth object that occurred in 1908 in Tunguska, Siberia. Known in the asteroid community as the “Tunguska Event,” this impact of an asteroid just slightly smaller than 2012 DA14 (approximately 100 – 130 feet/30-40 meters across) is believed to have flattened about 750 square miles (1,200 square kilometers) of forest in and around the Podkamennaya Tunguska River in what is now Krasnoyarsk Krai, Russia.

In response to the question, what is “NASA doing about Near-Earth objects,” Yeoman and his colleagues explain:

The NASA Near Earth Object Observation (NEOO) Program detects and tracks asteroids and comets passing close to Earth using both ground- and space-based telescopes. The network of projects supported by this program, commonly called “Spaceguard,” discovers these objects, characterizes a subset of them and plots their orbits to determine if any could be potentially hazardous to our planet.

Spaceguard was a term coined by Arthur C. Clark in his book, Rendezvous with Rama. Like in Clark’s book, Spaceguard is a global detection system for asteroids, comets, or near-Earth objects in general, that have a potential to impact the earth. A 1992 U.S. Congressional Study produced a Spaceguard Survey Report that mandated NASA locate 90% of large (greater than 1 km) near-Earth asteroids within 10 years. Serious funding began for Spaceguard after the Comet Shoemaker-Levy 9 impact on Jupiter in 1994 that released the energy equivalent six million megatons of TNT (100,000 times the largest hydrogen bomb ever tested). Enough for an Extinction Level Event (ELE) were something similar in size to hit earth.

The increasing media hype over the threat posed by asteroids leads to the scenario that they may in future replace global terrorism as the new preeminent threat to humanity. This scenario in fact was clearly anticipated nearly forty years ago by one of NASA’s pioneers, Dr Werner Von Braun.

According to Carol Rosin, who worked with Von Braun in his final years, he became increasingly concerned over secret plans to create new global threats to justify a military buildup in outer space:

When I was a Corporate Manager of Fairchild Industries from 1974 through 1977, I met the late Dr. Wernher Von Braun. We first met in early 1974. At that time, Von Braun was dying of cancer but he assured me that he would live a few more years to tell me about the game that was being played- that game being the effort to weaponize space, to control the Earth from space and space itself…. As practically a deathbed speech, he educated me about those concepts and who the players were in this game…. What was most interesting to me was a repetitive sentence that he said to me over and over again during the approximately four years that I had the opportunity to work with him. He said the strategy that was being used to educate the public and decision makers was to use scare tactics That was how we identify an enemy.

Then terrorists would be identified, and that was soon to follow. We heard a lot about terrorism. Then we were going to identify third-world country “crazies.” We now call them Nations of Concern. But he said that would be the third enemy against whom we would build space-based weapons.

The next enemy was asteroids. Now, at this point he kind of chuckled the first time he said it. Asteroids-against asteroids we are going to build space-based weapons.

If Rosin is correct, then Werner Von Braun believed that NASA would eventually begin to hype the threat posed by asteroids and near earth objects as part of a secret strategy to make asteroids the new global threat. While NASA went to some length to emphasize that Asteroid 2012 DA14 did not threaten the earth, the media frenzy created by NASA’s detailed media teleconference is creating a public perception of asteroids as a new global threat.

It is not far-fetched to speculate that if an asteroid the size of Asteroid 2012 DA14 were ever to impact the earth and cause regional devastation that included parts of the USA, that we would have a new 911 event. The U.S. would lead a global coalition of the willing to transform Spaceguard from an NEO early detection system to a preventive system equipped with advanced space based weapons. More disturbing would be the possibility that elements of a highly classified US led space fleet discovered by the British hacker, Gary McKinnon, could deliberately steer an asteroid to impact the Earth to create the world’s first space-based false flag event.