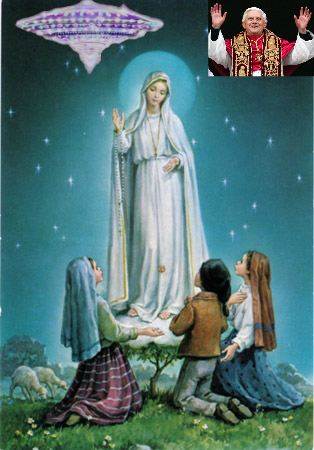 Written by Dr Michael Salla on February 13, 2013. Posted in Exotheology Marian apparition at Fatima was an extraterrestrial encounter

The Pope’s resignation speech on Monday morning has left Vatican experts baffled over the real reason for his resignation. Most are dismissive of his stated health reason for resigning. Some commentators believe he was ordered to go by powerful behind the scenes forces who believed that the time was right for a new Pope. Some speculate that the Pope was ordered to resign by the Knights of Malta, a powerful behind the scenes Catholic order which has sovereign representative status at the United Nations. They may be right. After all, in 2005 when he began his Papacy, Pope Benedict was widely regarded as a place holder. Place holder for who?

The Final Pope according to the Prophesy of the Popes who would rule during the dissolution of the Catholic Church. What would emerge after the end of the Papacy and the Catholic Church, a new spiritual belief system based on world unity? What set of global events could usher in the dissolution of organized religion? For an answer, we can investigate the 1917 Fatima incident which Pope Benedict played a role in interpreting back in May 2000.

Three young children received six apparitions of the Virgin Mary over a period of six months from May to October 1917. Lucia Santos and her cousins Jacinta and Francisco Marto received three prophecies or secrets. Two of the secrets were revealed by Lucia in 1941 in a document requested by Jose da Silva, Bishop of Leiria.

The First Secret concerned a vision of Hell on earth which was mitigated for the children by the promise that they and others would be taken to heaven by their devotion to the “Immaculate Heart of Mary.” Given that the apparitions occurred during the lead up to some of the most intense fighting of the First World War, the First Secret appeared to be a statement of contemporary global events. The Second Secret predicted a second World War and future calamities if Russia was not converted by the prayers of the faithful, and their dedication to the Virgin Mary. Both the onset of the Second World War and the dissolution of the Soviet Union in 1991 have been regarded as supporters of the Fatima event as vindication of the Second Secret which seemed unthinkable at the time it was first publicly revealed. The Third Secret was not initially revealed by Lucia to the Bishop of Leiria in 1941 because she was “not yet convinced that God had clearly authorized her to act.” Two years later, the Bishop ordered Lucia to put the secret in writing. She wrote the secret down on a sheet of paper, put it in an envelope and sent it to the Bishop in June 1944 with the instruction that it was not to be opened until 1960 when “it will appear clearer.” The “Third Secret of Fatima” was not released to the public for another 56 years fueling speculation that it prophesied calamitous times for the Catholic Church. In May 2000, the Vatican released a document that did indeed reveal calamitous times ahead for the Catholic Church:

And we saw in an immense light that is God: `something similar to how people appear in a mirror when they pass in front of it’ a Bishop dressed in White, `we had the impression that it was the Holy Father’. Other Bishops, Priests, men and women Religious going up a steep mountain, at the top of which there was a big Cross of rough-hewn trunks as of a cork-tree with the bark; before reaching there the Holy Father passed through a big city half in ruins and half trembling with halting step, afflicted with pain and sorrow, he prayed for the souls of the corpses he met on his way; having reached the top of the mountain, on his knees at the foot of the big Cross he was killed by a group of soldiers who fired bullets and arrows at him, and in the same way there died one after another the other Bishops, Priests, men and women Religious, and various lay people of different ranks and positions.

Lucia later confirmed in communications with the Vatican that the Bishop dressed in White was a future Pope, but she did not know who. The Third Secret did indeed refer to the death of a Pope in a way that echoed the Prophesy of the Popes. The systematic death of Bishops and other religious figures in a ruined city appeared to symbolize the destruction of Rome and the Catholic Church. So did the Third Secret of Fatima prophesy that the Catholic Church would come to an end, and the last Pope killed? The theological commentary accompanying the Third Secret of Fatima was written by none other than Cardinal Joseph Ratzinger, the current Pope Benedict, who then headed the Congregation for the Doctrine of the Faith. His deputy, Archbishop Tarcisio Bertone wrote: “Fatima is undoubtedly the most prophetic of modern apparitions.” While Ratzinger agreed with the prophetic value of the three secrets of Fatima, his interpretation of the Third Secret was that the death of the Pope symbolized the attempted assassination of John Paul II, and the persecution suffered by the Church in the 20th century.

What is the meaning of the “secret” of Fatima as a whole (in its three parts)? What does it say to us? First of all we must affirm with Cardinal Sodano: … “the events to which the third part of the “secret” of Fatima refers now seem part of the past.” Insofar as individual events are described, they belong to the past. Those who expected exciting apocalyptic revelations about the end of the world or the future course of history are bound to be disappointed.

So what was it about the Fatima event and the apparition of the Virgin Mary that could lead to the Vatican withholding the Third Secret for over fifty years until 2000? Was it because it did allude to or confirm what was found in the Prophesy of the Popes – the end of the Papacy and the Catholic Church? Or was withholding the Secret part of the Church’s strategy to see if it would outlast the Communist ideology, which did directly persecute Christians in the Soviet bloc? Pope Benedict opted for the second answer in giving his theological commentary in May 2000, but he knew that Fatima event was not simply a spiritual incident. The Pope knew that Fatima was actually a case of a UFO sighting witnessed by thousands in this remote Portuguese town. The Marian apparition witnessed by the three girls was related to extraterrestrials aboard the UFO whose revelations proved to be incredibly prophetic. The final of which involved the end of the Papacy and the Catholic Church. The real reason behind the Pope’s sudden resignation announcement may be that the Catholic Church is about to be convulsed by events related to the appearance of extraterrestrial life bearing a transformative spiritual message for humanity – one that will bring an end to organized religion around the world.

Click link for Part 1 of this series of articles on the Pope’s resignation. Lightning strikes Vatican after Pope resignation: harbinger of Papacy’s end?