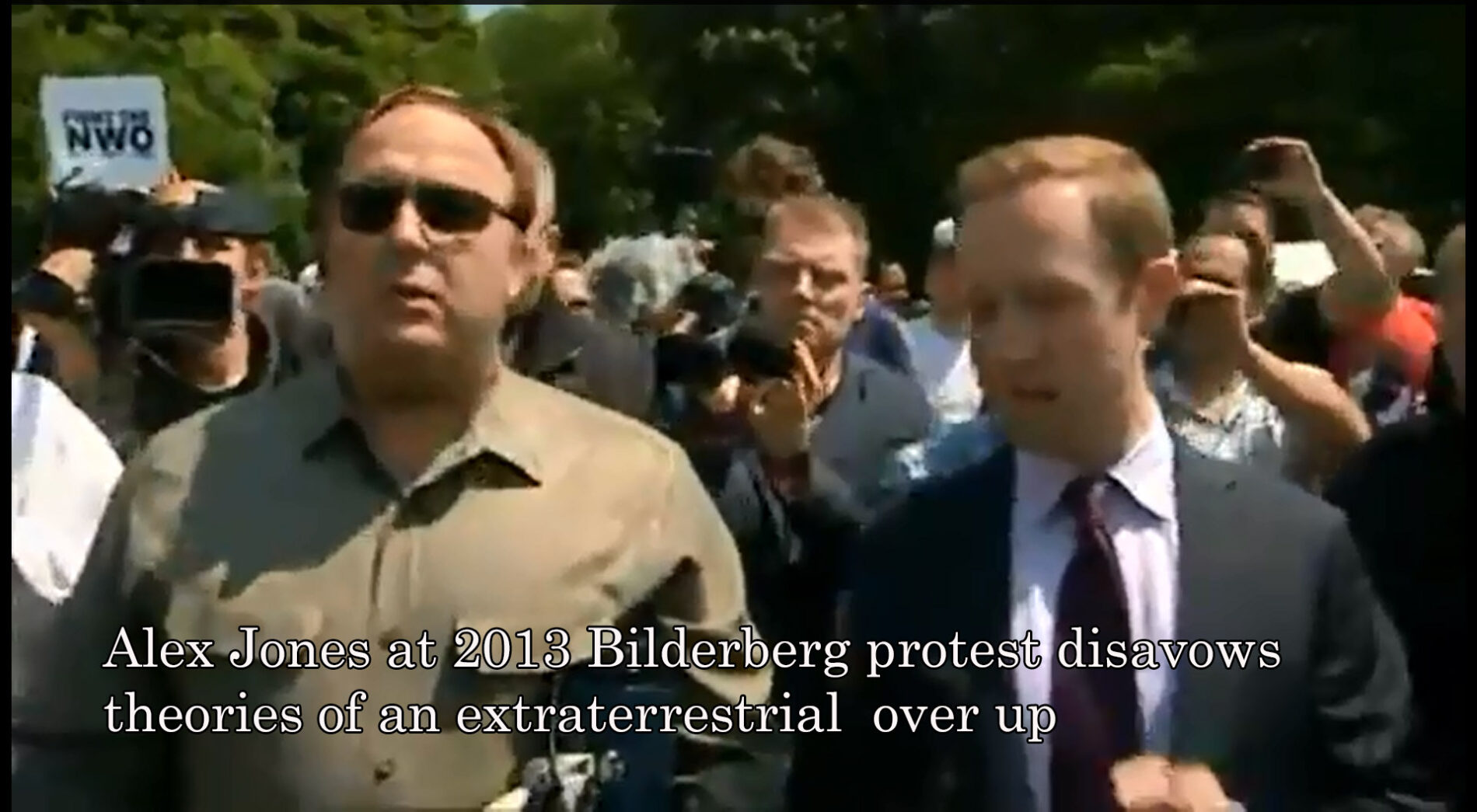 The BBC sent a reporter to cover protests at the annual Bilderberg meeting held near Watford, Britain. In a video segment made available online, the BBC reporter approached Alex Jones who was described as “King of the conspiracy theorists.” When asked if there was any conspiracy theory that he rejected, Jones replied that it was the idea of an extraterrestrial cover-up. More important, according to Jones, are the globalist policies designed and orchestrated by the Bilderberg group that he wants to expose. Jones declaration was no big surprise for any that have followed his exposés on Inforwars.com or PrisonPlanet.com. Jones dismissal of an extraterrestrial cover-up, while protesting at a Bilderberg meeting is ironic since that may well be the very reason why the annual Bilderberg meeting was created in the first place.

First, let’s begin with what Jones actually said. The BBC reporter approached him and asked: “Are there conspiracy theories out there that you think are too nuts, are just too extreme.”

Jones replied: “Yes, I don’t personally believe there are extraterrestrials or anything like some people say.”

In the full BBC video report, Jones went on to describe a litany of globalist policies that have been orchestrated by the Bilderberg group, completely unaware of the irony of his initial response to the reporter’s question. Jones was essentially claiming that there was no connection between the annual Bilderberg meeting and conspiracy theories of an extraterrestrial cover up. Historic events and evidence, however, suggest otherwise.

The first Bilderberg meeting in 1954 had multiple reasons to convene. The public justification was that it was held to promote political and economic cooperation between Europe and North America as the best defense to what was now perceived as the long term threat of communism. To that end, prominent business and political leaders have been regularly invited to Bilderberg Group on an annual basis to discuss ways of coordinating national policies and anticipating global trends.

Key personnel and agencies involved in the formation of the Bilderberg Group reveal that its hidden purpose was to encourage global cooperation in response to a perceived long term threat known to Bilderberg’s creators: the Central Intelligence Agency (CIA); the Rockefeller brothers and Prince Bernhard of the Netherlands. This long term threat was only shared on a need-to-know basis, and emanated from World War II events involving Nazi Germany’s advanced technology programs.Events which Nelson Rockefeller, and the CIA & its OSS predecessor, became deeply intimate with during and immediately after the War – Nazi attempts to reverse engineer extraterrestrial technologies for the war effort.

The main task of the Bilderberg Group was to coordinate the nations of the world so that any information gained by any nation pertaining to extraterrestrial life and technology was to be sent to the right place for research and development. A highly secretive second Manhattan project that had begun in the United States under President Truman to deal with the alien life and technologies was expanded to include other nations in a globally coordinated effort. Eisenhower’s election in November 1952, offered his chief supporters, the Rockefeller Family, the opportunity to have greater corporate involvement in the now ‘global’ Manhattan Project.

The Rockefeller brothers (Nelson and David) along with Dr Henry Kissinger, who was a protégé of the Rockefeller brothers, were instrumental in shaping the Eisenhower government’s response to extraterrestrial technologies using Cold War covert operations as a cover, and helping set up the Bilderberg Group for that purpose. The Bilderberg Group would meet to coordinate national policies so that humanity would have the best chance of surviving the challenges posed by visitation of different extraterrestrial factions with unknown agendas.

It would have to be funded in a way that the mass media and national legislatures would not discover what was happening. This funding came from diverse sources such as CIA front companies, insider trading, “black gold”, international drug trade, etc. This was a key reason why international bankers were prominent in Bilderberg Group meetings. International banking offered the means for transferring enormous sums of illicitly generated money to this unacknowledged Global Manhattan Project.

It’s ironic that Alex Jones would disavow theories of an internationally orchestrated cover-up of extraterrestrial life at the 2013 Bilderberg Group meeting. Perhaps it’s not so ironic after all. According to a recent radio interview given by Alex Jones himself, at family reunions half the people in the room are retired and former CIA – the key U.S. agency involved in the creation of the Bilderberg Group.

Given evidence that the CIA has been the lead U.S. government agency orchestrating a global cover-up of information concerning extraterrestrial life, Jones anti-extraterrestrial cover-up views at a Bilderberg Group protest now make more sense. At his next family reunion Alex should have another chat with former CIA members present; and find out why, surprise, surprise, they lied to him.