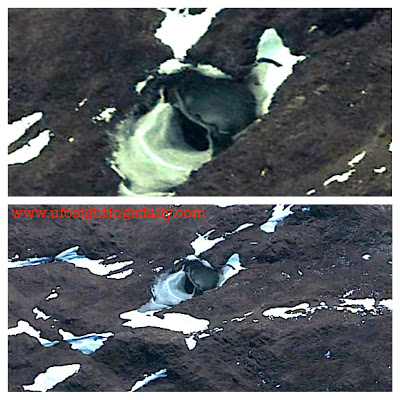 Google Earth Image of one of the strange entrances into Antarctica. Image Credit: UFO Sightings Daily

On Google Earth one can find two large entrances that extend below the Antarctic surface and ice near the coastline. For some observers, they are natural caverns formed over time by the intense Antarctic weather conditions. Not so according to Scott Waring owner of the popular UFO Sightings blog. In a post released yesterday, Waring claimed that they might be entrances to an alien base or a secret facility of some kind. He highlighted a video containing close-ups of the two large entrances. In the video, there is also an image of what Waring believes to be a huge saucer shaped object buried under melting ice near Antarctica. While there is no Google Earth image available of the mysterious buried UFO, the cave/base entrances are available for independent analysis. If the latter are indeed entrances to underground bases, then it would appear that claims that UFOs have bases in Antarctica, and may have even helped fleeing World War II Nazis escape a punitive U.S. Naval expedition, are not so far-fetched after all.

Let’s begin by examining the two large entrances discovered on Google Earth which are highlighted in a Youtube video uploaded on June 8 by Stephen Hannard showing various angles of the entrances. These entrances are available for independent confirmation at the following Google Earth coordinates (-66° 36′ 12.58″, +99° 43′ 12.72″ and -66° 36′ 12.58″, +99° 43′ 12.72″) They show entrances into the rocky underground. The first is approximately 30 meters high and 90 meters across. The video also shows a UFO allegedly found by Google Earth, but it is claimed that the image was removed and is no longer available.

Very interesting and intriguing images from Google Earth, which seem to show two possible entrances to an alien base or at least an entrance to something, and a huge saucer shaped object buried in the ice. If there are Alien bases in the Antarctic it would follow that there are ET craft their also.

Waring’s comments appear to accept a connection between the two large entrances and the alleged crashed UFO found in melting ice on South Sandwich Islands. The video shows no obvious connection other than all were allegedly discovered using Google Earth – the UFO, as mentioned earlier, is no longer available for independent confirmation. There is no independent confirmation that the UFO is genuine.

Nevertheless, the two entrances are clearly genuine and immediately raise the question over their artificiality. According to Hannard’s Youtube video, one of the entrances looks as though it has a metal canopy or dome covering it. This suggests that it is artificial. So if one or both of the entrances are artificial, then who built them? Are they recent, or some artifact from a bygone age when Antarctica was not covered by ice. Interestingly, the famous Piri Reis map show Antarctica without ice suggesting that its ice sheets are a geologically recent phenomenon.

One intriguing possibility is that the entrances are related to post-World War II events related to an alleged NAZI exodus to Antarctica, and a brief military confrontation between the US Navy and UFOs based under or near Antarctica.

An extraordinary 2006 Russian documentary revealed new information about the US Navy Antarctica expedition of 1946/47 – Operation Highjump. The Naval expedition was headed by famed polar explore Admiral Richard Byrd whose expedition ended after only 8 weeks with “many fatalities” according to initial news reports. Rather than deny the heavy casualty reports, Admiral Byrd revealed in a press interview in Chile that his Task Force had encountered a new enemy that “could fly from pole to pole at incredible speeds.”

After the Soviet collapse in 1991, the KGB released previously classified files that cast light on Operation Highjump. A 2006 Russian documentary made public for the first time a 1947 secret Soviet intelligence report commissioned by Joseph Stalin of the Operation Highjump mission to Antarctica. The intelligence report, gathered from Soviet spies embedded in the US, revealed that the US Navy had sent the military expedition to find and destroy a hidden Nazi base. On the way, they encountered a mysterious UFO force that attacked the military expedition destroying several ships and a significant number of planes. Indeed, Operation Highjump had suffered “many casualties” as stated in initial press reports from Chile. While there is a possibility the report resulted from US disinformation fed to a known Soviet mole, the more likely explanation is that the report exposes the first known historical incident involving a battle between US naval forces and an unknown UFO force stationed in underground facilities in or near Antarctica.

The mysterious entrances found in Antarctica by Google Earth may be nothing more than naturally formed entrances into caverns that extend under the Antarctic surface and ice. The entrances, on the other hand, may be artificially constructed entrances into underground UFO bases. If the latter option is correct, then perhaps we have an historical answer to where the mysterious UFO forces came from that attacked Admiral Byrd’s Operation Highjump expedition in early 1947.