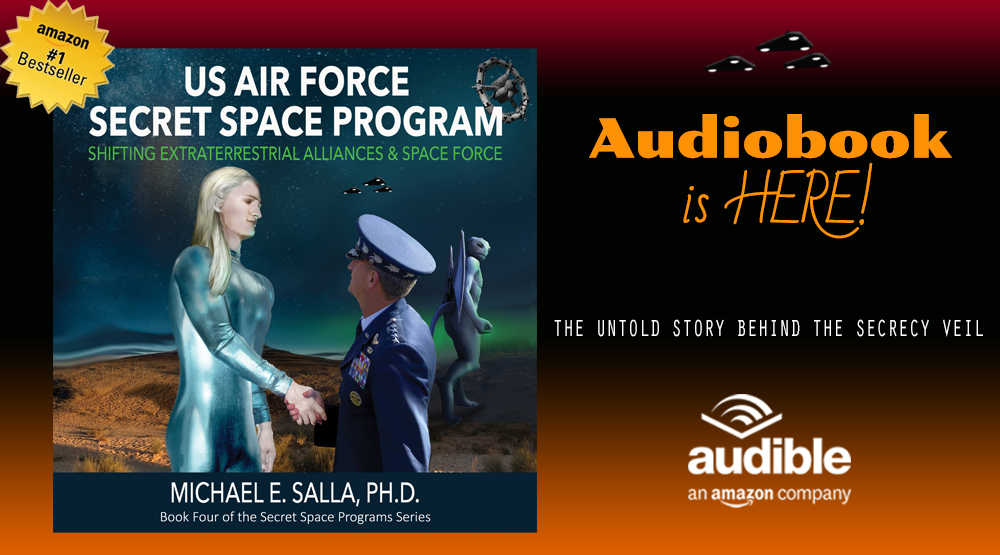 Written by admin on July 29, 2019. Posted in Announcements, Featured

The Audio Book version of the Amazon Best Seller US Air Force Secret Space Program: Shifting Extraterrestrial Alliances and Space Force is released today! Now you can listen to this critically acclaimed book during your commute, while relaxing or just taking a stroll through nature.

The Audio Book version is narrated by Jerry Lord who wonderfully captures all the nuances and excitement of the original print edition. The Audio Book runs for 16 hours and 24 minutes, and is unabridged.

Listen and share with your friends and family the long guarded and shocking secrets of the Air Force’s history of research and development of exotic aerospace technologies! U.S. Air Force is preparing to reveal its arsenal of antigravity space craft with the launch of Space Force …

The US Air Force is experiencing a profound shift! In order to aggregate the military’s major space assets under one authority, they are being moved into a new branch under the purview of the Air Force. This new branch is to be called “Space Force”. The true purpose of Space Force will be to publicly unveil the most well-guarded secrets in the Air Force’s stunning arsenal of exotic spacecraft, unconventional weapons and mind-blowing technologies assembled over the more than seventy years since its official emergence in 1947.
This book lays out the history of the Air Force Secret Space Program: Ushering in a new era with the recovery of several extraterrestrial craft in the 1940’s. Secret agreements with a breakaway German colony in Antarctica (the Fourth Reich) & different extraterrestrial groups in the 1950’s. Its complicity in the German infiltration of NASA & the Military-Industrial Complex in the 1960’s. Development of stealth space stations beginning from the 1970’s. Deployment of squadrons of disk, triangle and rectangular-shaped craft in the 1980’s & 1990’s. After its 2016 discovery that it had been deceived by the Deep State and their shadowy Fourth Reich allies, Air Force leaders made the momentous decision to shift alliances and realigned their covert space program with human-looking extraterrestrials. This has led to bold steps being taken by the Air Force to reveal the existence of its arsenal of spacecraft to the US public.. (16 hrs and 24 mins, unabridged)