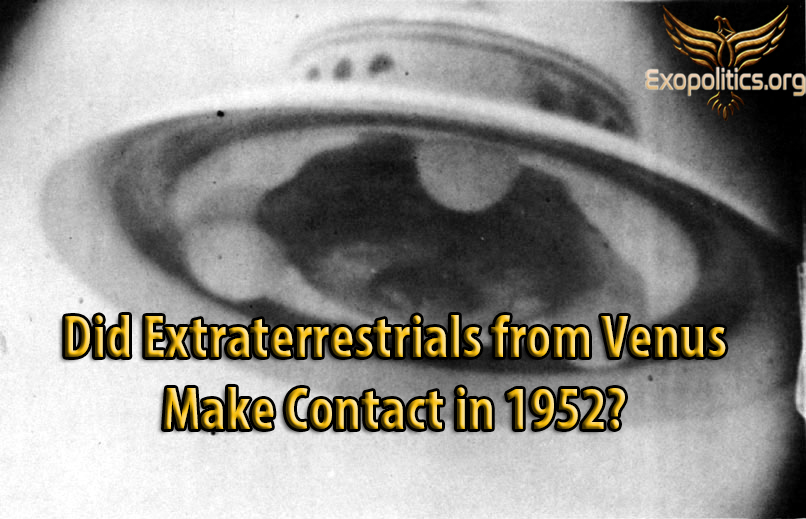 French researcher Michel Zirger has written a highly detailed book on extraterrestrial contact which highlights the encounters of George Adamski with alleged extraterrestrials from Venus. In We Are Here: Visitors without a Passport (2017), Zirger provides a solid overview of a collection of photos and testimonies backing up Adamski’s famed November 20, 1952 encounter near Desert Center, California. Zirger points out that Adamski’s encounter was the first documented contact case with an occupant from a flying saucer craft, widely believed to be a Venusian extraterrestrial.

Six witnesses saw two UFO craft on the day of Adamski’s encounter. The first was a large cigar shaped craft that flew overhead, and the second was a smaller saucer shaped scout craft that landed. From the scout craft an occupant emerged to meet with Adamski, who claimed to be from the planet Venus and went by the name, Orthon.

In his book, Zirger includes digitally enhanced copies of the original photos taken at Adamski’s encounter which show both the scout craft hovering before landing, and its occupant who emerged after the landing.  The photos were enhanced by Danish artist Rene Erik Olsen who has made the Desert Landing photos available on his website. The following photo is an enhancement of a person (Orthon) walking from the direction of the landed scout craft towards Adamski. Discussion and close-ups are available in We Are Here. The six witnesses to the landing and Adamski’s encounter with its occupant signed an affidavit supporting Adamski’s version of events that was subsequently published in his 1953 co-written book, The Flying Saucers Have Landed. Zirger cites one of the witnesses, George Hunt Williamson, who was recorded to say during a lecture:

I would like to reaffirm here that the experience, as George Adamski has related in Flying Saucers Have Landed, where my wife and I, along with friends of ours, were witnesses to the occurrence, happened exactly as Mr. Adamski mentions there in Flying Saucers Have Landed: the large craft was witnessed, and then through binoculars we did witness the other happenings about a mile away on the desert… We did see Mr. Adamski talking to someone … at a distance. We saw the large craft. We saw flashes of light from it, from which we later learned the smaller craft had come out of the larger one. We did see a great opening in the bigger craft through which the smaller scout-ship must have originally left the larger ship…. We did see the small ship as it hovered in the saddle [see photo of the base of the small hills where Adamski was standing]. (Kindle Edition 5203-10)

Despite the compelling evidence, Adamski’s 1952 encounter was widely debunked. Zirger discusses the shocking extent to which evidence and testimonies supporting Adamski’s famous Desert Center landing was dismissed, ridiculted or distorted by leading scientists of the era such as Dr. Donald Menzel, Dr. Jacques Vallee, and Dr. Carl Sagan.

Most UFO researchers have ever since dismissed Adamski as a hoaxer, despite the compelling evidence suggesting otherwise. Indeed, Adamski’s photos of flying saucers and cigar shaped ships dating from 1950 have never been shown to be forgeries.

Adamski believed that the being who emerged from the landed scout craft in 1952 was from Venus. Zirger discusses the feasibility of Adamski’s belief given scientific data that subsequently emerged showing the surface of Venus as uninhabitable due to the high temperatures (462°C; 863° F) and crushing atmospheric pressure (92 times that of Earth).

Zirger discusses a number of possibilities for how extraterrestrials may inhabit Venus. He suggests that NASA may be lying about the horrific conditions on the surface of Venus. Another possibility is that extraterrestrials merely have a base there and came from elsewhere in the galaxy.

Yet, another possibility is that extraterrestrials live in the subterranean regions of Venus as made feasible by recent scientific research. He cites Sean McMahon, who led a scientific team from the University of Aberdeen, that claimed life could evolve inside a planet’s interior, well away from an inhospitable surface:

Zirger cites a range of esoteric texts and sources supporting the idea that an advanced civilization exists on Venus, but is hidden from modern telescopes and planetary probes sent by different national space agencies. For example, he refers to the 1899 book, A Dweller of Two planets:

No telescope will ever reveal life on Venus: not that it is not there, but its forms are of the One Substance effected by a range of force rendering them imperceptible to earthly eyes.”

There have been a number of contactees who claim to have met Venusians from the interior of the planet, well away from telescopes and space probes. These include Frank Stranges, author of the book, Stranger at the Pentagon.

More recently, secret space program insider, Corey Goode, claims he was taken to Venus where he saw some of the ancient structures he calls “builder race technologies” on the planet’s surface.

[W]e headed towards Venus at a super high rate of speed, punching through the thick clouds. I barely could perceive yellowish color, we went through them so fast. And then we stopped about 1,000 feet [305 meters] above the ground, and I was looking around, and I saw this terrain that looked like it had been eroded by lots of wind and rain, sort of like you would see in Earth. They looked like they used to be mountains going up that had eroded away, and they looked almost like people. It looked almost carved by an intelligent hand.So I was noticing that, when all of a sudden the ceiling and the floor went transparent … And I looked down, and I could see the big, giant, H-shaped building sitting inside this crater. Giant H Shaped stone structure in a crater on Venus surface according to Corey Goode. Permission Sphere Being Alliance

Goode says he encountered an ancient being there called the “Sentinel” who watched over the ancient builder technology that was protected by an energy shield of some kind. His account has parallels to the alleged visit to Venus by Bolivian contactee Luis Mostajo Fernando who says the entered into a fertile area of Venus protected by an energy shield.

Goode, Fernando and other accounts of visits to Venus does support an ancient civilization once inhabited its surface, and that subterranean areas exist that support current life there.

Zirger’s discussion of the explanations for Orthon’s claim to be from Venus despite its inhospitable surface conditions is wide ranging and informative.

Yet it is in another possibility that Zirger raises that may offer a more accurate way of viewing Adamski’s 1952 encounter. Zirger questions whether Adamski was fed disinformation by Orthon about Venus being his true origin:

Was Adamski manipulated by a “pseudo-Venusian”? Was this Venusian origin part of a smokescreen or of some sort of extraterrestrial “communication plan” to awaken our consciousness to the idea of extraterrestrial life? … The underlying motto of this “communicating strategy” would then be something like: Let’s tell lies, let’s tell lies, there will still be something left over,” Adamski being considered not much more than an interface to a disinformation or deception game.” (Kindle Edition, 1032 of 5403)

Zirger believes that the possible disinformation was designed to protect the true origins of Orthon and his spacecraft being learned. Zirger expressed puzzlement over why extraterrestrials from another solar system would want to pretend to be from an uninhabitable world from our own solar system:

“Why such a masquerade when they could have simply said they were from the planet T of the solar system Y? (Kindle Edition, 1042 of 5403)

Zirger overlooks an ‘earth-centric’ explanation for the disinformation that may have been fed to Adamski. This is raised by one of the contact cases mentioned by Zirger in We Are Here. He cites the 1957 case of Reinhold Schmidt:

I would like to quote briefly a last case, that of Reinhold O. Schmidt, 60 at the time, a Bakersfield (Calif.) grain buyer. On November 5, 1957, he claimed to have spoken for about 30 minutes to the crew of a large silver cigar-shaped UFO that had allegedly landed near Kearney on the Nebraska prairie to make repairs. In an available one-hour-and-a-half tape-recorded interview Schmidt stated the crew was composed of “four men and two ladies.” They all spoke to him “in American language with a German accent,” but at times he seemed to him that he could hear them talking among themselves in “high German language, very good high German.” (Kindle Edition, 526-531).

The Schmidt case raises the question, was Orthon part of a German Secret Space Program and was only pretending to be a Venusian?