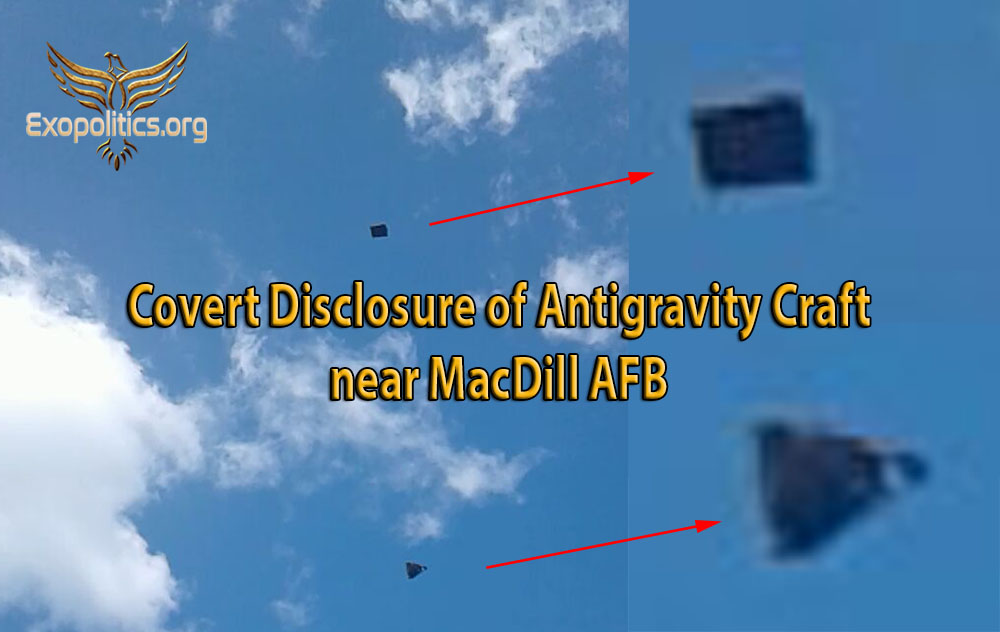 On October 19, I was sent a series of nine photos showing two UFOs in the vicinity of MacDill Air Force Base, home of Special Operations Command. The UFOs were respectively rectangle and triangle shaped, appeared to use antigravity technology, and were interacting with one another.

The photos were taken by JP, a pseudonym for a source I have known for nine years who claims to be both an extraterrestrial contactee and to have been taken in military abductions. He also claims to have interacted extensively with personnel from Special Operations Command, who have informally briefed him on some covert operations involving TR-3B and North Korea.

I have extensively communicated and questioned JP, and consider him to be sincere and reliable. He has previously supplied photos of triangle-shaped antigravity craft that he claims to have been taken on during previous military abductions.

In the most recent UFO incident, JP says he received a phone call instructing him on when the UFOs would appear. This is what he wrote in a skype message to me:

11 a.m. I got a call to look at the skies .. like around 11:02 I see this rectangle platform black ship.. it came out from the clouds 6 seconds after seeing the ship..TR-3B☆ shows up, you can see the characteristics of it the circle in the middle still glowing a little bit, in a blink of an eye it was their interacting with the black triangle platform ship similar to when it was interacting with the helicopter.. this was quite fast 2 minutes after the call lasting a minute and 20 sec.

He added in a later skype message:

The call was really fast like 10 seconds the guy said (I’m calling to inform you to look at the skies clock view (10:30) inbetween East and North have a nice day. Click..

JP next says that he has never before encountered the rectangle shaped UFOs, which appeared to come from the Gulf of Mexico:

I never seen those platform looking UFOs
Rectangle
It was quite interesting
I was hearing something weird this time
like I high pitch sound my ears were kind of like ringing after the event..
8 miles from MacDill this time
MacDill was in the Direction behind me
The platform ship looks like it came from the Gulf of Mexico
And I’m thinking the tr3b came from MacDill
They met up.

I have prepared a video featuring the nine photos he took, along with close ups of the three best pictures that show the UFO craft.

Here is how JP described the sequence of photos, and the interaction between them:

I saw the platform ship and out of nowhere the tr3b showed up in a blink of an eye.. then started interacting with the platform ship
I don’t know the exact size but all I can tell you it was the same height where the clouds were
Me knowing that there is three levels of clouds I’m thinking this is the lower cloud.. 6500 feet
Those are regular cumulus clouds
They’re at least 6,500 ft from sea level.

Below is a closeups of the first photo in the sequence showing just the rectangle platform shaped UFO taken by JP, after being directed to look up into the sky. Next is a close up of the third photo in the sequence showing the rectangle and triangle shaped UFOs appearing to interact in some way, where high pitched sounds are heard by JP. Based on JP’s account of how the photos were taken and their estimated elevation, size, sounds and maneuvers, they do not appear to be balloons, drone aircraft or aircraft using conventional propulsion systems. The fact that JP received a phone call, is very telling. It clearly suggests that the UFO sighting was deliberately staged for him, using classified technologies.

This leads to the conclusion that JP was encouraged to take the photos in what is a covert disclosure of antigravity craft operating in the vicinity of MacDill AFB. Given JP’s previous accounts of his interactions with special forces operatives out of MacDill, it would be reasonable to conclude that the covert disclosure has been sanctioned by Special Operations Command.

This is not the first time that JP has been given advance notice by covert operatives of a UFO sighting in the vicinity of MacDill. Previously, he has been warned to only take photos and not video. However, he has been told in the future he will be allowed to take and release videos of the antigravity craft he is photographing to accelerate the disclosure process.

[Update: A GoFundMe campaign has been started on behalf of JP so he has a higher resolution camera for the UFOs pics he is taking. Your support for this Gofundme campaign will help move forward the UFO/SSP disclosure process. More info here.]