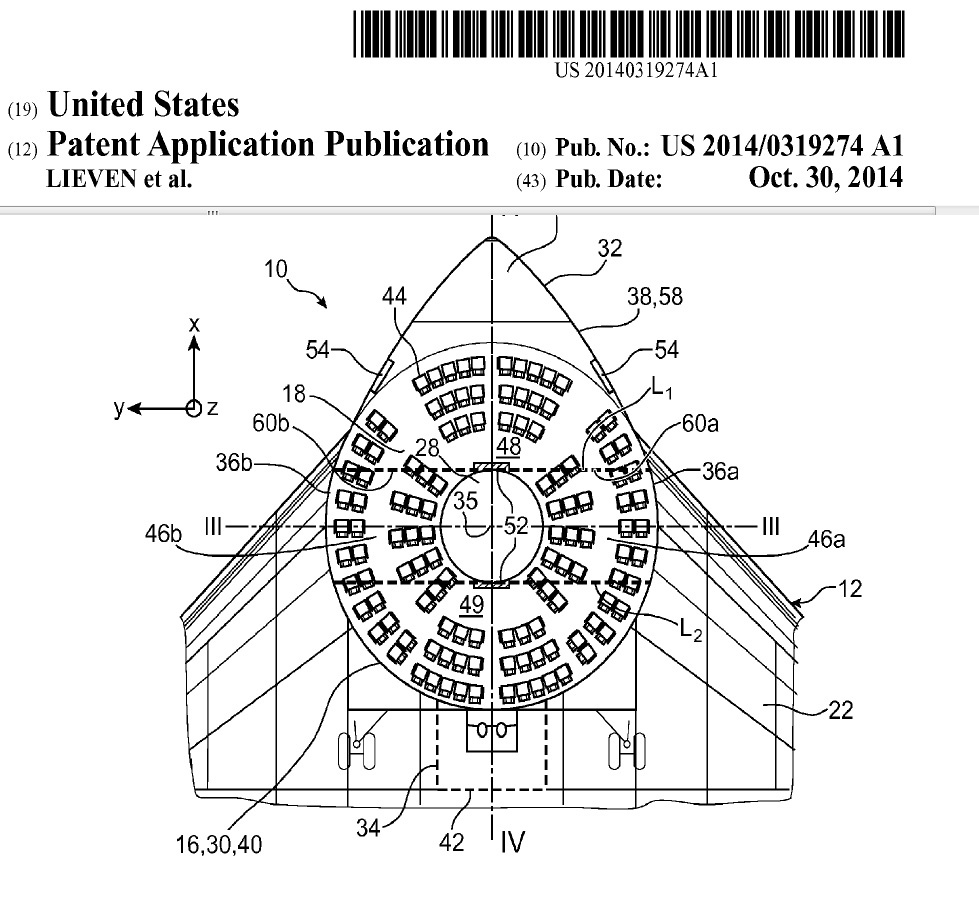 Airbus has filed a new patent for a UFO-like airplane that looks like something right out of a Sci Fi movie. RT today described the radical Airbus design as a “bagel plane” where passengers sit in a ring. The Financial Times, which was the first to announce the new design in a November 16 story, reported that the UFO-like shape addresses key structural problems faced by aircraft engineers for cylindrical designs. Will the new Airbus design use a traditional propulsion system such as aviation fuel that is currently the standard for civilian aircraft? The UFO-like design makes more sense if Airbus was preparing for an innovative future propulsion system for the aviation industry – antigravity!

The Airbus Patent application says that the design attempts to address the structural problems created by cylindrical shaped aircraft with have to deal with huge air pressures at the front and back:

The present invention proposes an aircraft wherein the structure delimiting passenger cabin extends over 360 degrees around a space defined outside structure. The invention allows structure to be more resistant to loads induced by the cabin pressurization, while allowing to reduce or even to avoid the need for a sealed bottom ….

Avoiding “a sealed bottom” leads to one of the most radical differences with conventional aircraft as the Financial Times describes regarding the “flying doughnut”: “Diagrams in the patent application show passengers entering the aircraft through steps leading up to doors arranged around the hole in the doughnut’s middle.”

Aviation experts are skeptical that the UFO-like design is feasible. Loren Thompson from the Lexington Institute told the Financial Times: “I’ve never seen anyone suggest anything like this in a heavier-than-air system,” Thompson’s skepticism is understandable given current fuel propulsion systems for the aviation industry. So is there an alternative propulsion system that might make the Airbus design feasible?

Classified antigravity technologies have been secretly developed by military-corporate entities, but kept from the public realm for over six decades. It was revealed in 1992, for example, that the B-2 Bomber used electrostatic charges on its leading wings and exhaust.  According to aerospace experts, this was confirmation that the B-2 used electrogravitic principles based on the Biefeld-Brown Effect.  The Biefeld-Brown Effect is based on the research of Thomas Townsend Brown who in 1928 gained a patent for his practical application of how high voltage electrostatic charges can reduce the weight of objects. The B-2 bomber employs sufficiently high voltages to significantly reduce its weight. This enables the B-2 and other classified antigravity vehicles to display flight characteristics that appear to defy conventional laws of physics.

In 2002, an internal Boeing project called “Gravity Research for Advanced Space Propulsion” (GRASP) was disclosed to the aerospace industry. A GRASP briefing document obtained by Jane’s Defense Weekly stated Boeing’s position: “If gravity modification is real, it will alter the entire aerospace business.”

According to a 2008 book by Dr Paul LaViolette, Secrets of Antigravity Technology, Boeing completed a separate classified study for the U.S. military of electrogravitic propulsion before October 2007. Boeing was rebuffed in its efforts to have such technology declassified and released into the public sector. The Airbus patent for a UFO-like “flying bagel” is the future of the aviation industry once antigravity technologies are declassified into the public arena. Perhaps on the insiders track, Airbus knows something we don’t, and is getting ready for a future when “flying bagels” fill the skies!