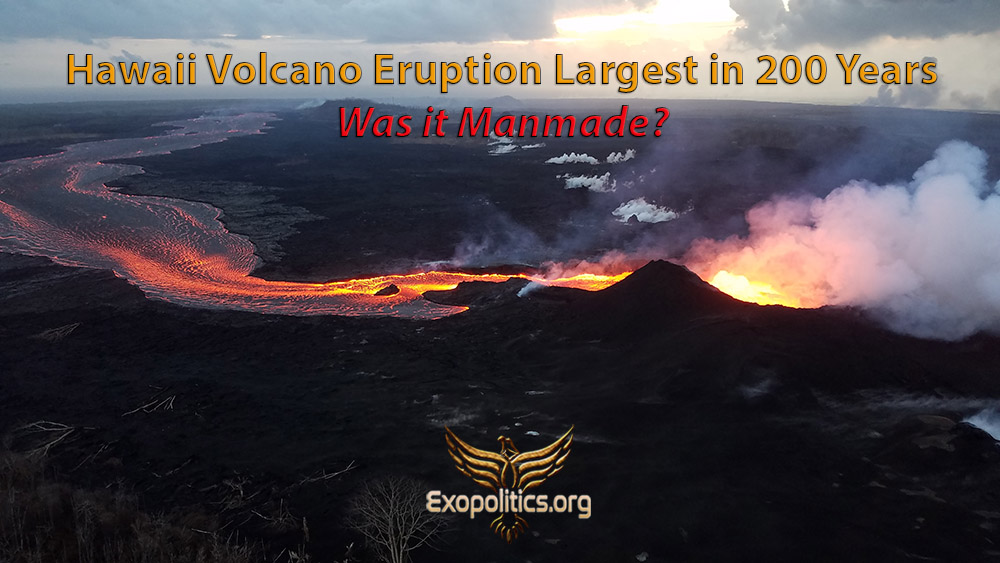 Hawaii Volcano Eruption Largest in 200 Years – was it Manmade?

Written by Dr Michael Salla on July 20, 2018. Posted in Featured, US Politics

It’s official, scientists with the United States Geological Survey (USGS) say that the lava outflow in the lower Puna region of the Big Island of Hawaii is the largest in 200 years. In a newly released video titled: “Hawaii Eruption Unprecedented In Past 200 Years”, Steven Brantley from the USGS Hawaii Volcano Observatory said the lava currently flowing out of the East Rift Zone of the Kilauea Volcano, is the “most voluminous”, with the “highest eruption rate”, “highest SO2 emission rates” and already dwarfs the Pu’u O’o lava flow which lasted for 35 years.

The lava outbreak is also unprecedented in the scale of destruction with over 800 homes lost, and 12.5 square miles (32.5 square kilometers) of pristine forest and farmland overrun.  In addition, the lava flow has filled in many popular tourist locations such as Kapoho Bay, Tidal Pools, and Warm Ponds, and thereby created over 700 acres of new land.

It is estimated that in the next day or so, the lava flow will overrun Pohoiki Bay which has the only boat ramp in the region, and is a popular recreational area used by swimmers, surfers and fishermen.

The following USGS map shows the lava flow as of July 16 and the areas (in red) that have been overrun: Brantley compared the current lava flow to previous years which was summarized in a slide with the following information.

The amount of lava (450 million cubic meters) has already more than doubled the previous largest lava outflow which occurred back in 1840, and continues to be very active.

Brantley emphasized: “Clearly this activity now is unprecedented in the past 200 years”.

All this raises the question of whether the Puna Geothermal Venture, which used a form of fracking called enhanced geothermal system (aka geothermal fracking) is responsible in some way for what is happening in lower Puna.

Snopes and other critics of any linkage between drilling activities at the geothermal plant and the current lava flow claim that it is normal for lava outbreaks to occur in the East Rift Zone, and that there is nothing unusual in what we are currently witnessing.

Well that argument has been shown to be completely wrong given the latest scientific data. The language used by Brantley and other USGS scientists asserting an unprecedented volume of lava flow makes it worthwhile to more closely investigate what has actually been occurring at the Puna Geothermal Venture, and its role in the current eruption.

In a previous article, I showed how the Puna Geothermal Venture has been using a form of drilling and geothermal energy extraction which is very similar to fracking. The plant would extract heated fluid and steam from a brine lake thousands of feet under the ground, use the steam to generate energy for electricity production, and then pump the brine along with added chemicals back down through its injection wells.

The following diagram illustrates what generally happens in the geothermal energy extraction process: In the case of the Puna Geothermal Venture, it was drilling into a large brine lake (formed by seawater trapped in an old lava tube) that was heated by the underlying rock and deeper layers of magma.

All this would form the alleged “closed system” by which the geothermal plant would extract heated brine and steam, and reinject the brine and other chemicals in order to maintain the pressure and equilibrium in the lake.

This alleged equilibrium that would be maintained by the reinjected brine, which Snopes emphasized, would only last if the underlying rock was not damaged or fractured by the reinjected brine and other fluids. However, as can be expected, drilling multiple wells into a fragile rock geology which lies above a large brine lake, which in turn is sitting atop an active lava channel (the East Rift Zone) created unnecessary danger and stress in a very complex ecosystem.

It’s worth emphasizing that Puna Geothermal Venture has drilled wells to extract geothermal fluid, and then drilled injection wells to pump the brine and added liquids back down. In the following geological study conducted over a 100 month period within a 10 km radius of the geothermal plant, it was found that there existed a clear link between the re-injection wells with earthquake activity.

This leads to the critical question, why did Hawaii county and state authorities ignore the correlation between the injection wells and earthquake activity up to 2013? The scientific study clearly showed the danger in digging additional wells into the East Rift Zone, over and above what had been initially permitted by government authorities. Yet this is precisely what happened.

A former US Department of Energy employee who was familiar with the geothermal energy extraction process used at the Puna Geothermal Venture provided the following information in a private email that explains why additional wells were being built:

The Geothermal plant digs wells thousands of feet deep. The wells reach a brine water lake reservoir heated by lava. That heated brine is pumped up to create power. However, due to irregular electricity demand by HELCO, the pipes sit empty and salt in the brine sticks to the pipes and makes the pipes unusable. They then need to drill new wells. They have spent more money than they wanted to in drilling wells.

This is very significant since it shows that the number of wells that needed to be dug into the brine water lake, had increased well beyond initial estimates. Exactly how many wells did the Puna Geothermal Venture and its parent company Ormat Technologies get licenses to drill, and why were increases allowed?

On December 16, 2014, despite strong local opposition based on scientific data showing the dangers, the County and Hawaii State authorities granted the Puna Geothermal Venture a license to drill a 16th well, called KS-16: It is worth noting that approval to drill an additional well was given after the 100 month geological study [see earlier graph] had shown that the fluid injection occurring at the geothermal plant  was correlated with increased seismic activity within a 10 km radius of the plant. Therefore, despite concern over increased seismic activity from previous wells and strong local opposition, Hawaii authorities still granted the permit to drill.

It’s important to emphasize that drilling a 16th well through thousands of meters of rock in an area already destabilized by earthquakes caused by prior wells would only further damage the underlying geology. The big question is whether this occurred sufficiently to cause a major channel of lava flowing from the Kilauea summit all the way down to the East Rift Zone. The appearance of the fissures within a six kilometer radius supports the conclusion that the drilling of new wells and the injection of fluids caused earthquakes, which destabilized the underlying geology sufficiently to cause the appearance of the lava fissures.

Furthermore, a Duke University scientific study completed in 2010, showed that the Puna Geothermal Venture had drilled into the lava flow at a depth of 2500 meters (7500 feet), and had brought lava to the surface.

All these wells were approved by county and state authorities despite scientific data published in 2013/2014 showing earthquakes in a 10 kilometer radius of the plant showed a correlation with drilling and injection activities. At least one, if not more of the wells, even penetrated into the underlying layers of magma facilitating it to rise up through the brine lake, further destabilizing the underlying ecosystem in the process.

These cumulative activities subsequently destabilized the East Rift System to the degree that massive outflow of lava would eventually begin draining from the Kilauea summit into the direct vicinity of the geothermal plant. The fact that all 23 fissures lie within a six kilometer radius of the plant, as the above map clearly shows, is smoking gun evidence that the disaster was manmade.

Therefore, it can be concluded that the largest outpouring of lava in the last 200 years was caused to a significant extent by human activity which at best was reckless and dangerous in meeting electricity production targets.

More troubling questions arise as to whether the lava outbreak was caused by corrupt corporate and Hawaii government officials, as claimed by veteran investigators Dr. Len Horowitz and Sherri Kane in their new documentary Spacegate; and was the disaster contrived as part of a secret geoengineering effort by a global elite connected to the Deep State wishing to destabilize the Hilina Fault System sufficiently to generate a mega tsunami to devastate Hawaii and the U.S. Pacific Coast as described in a previous article?