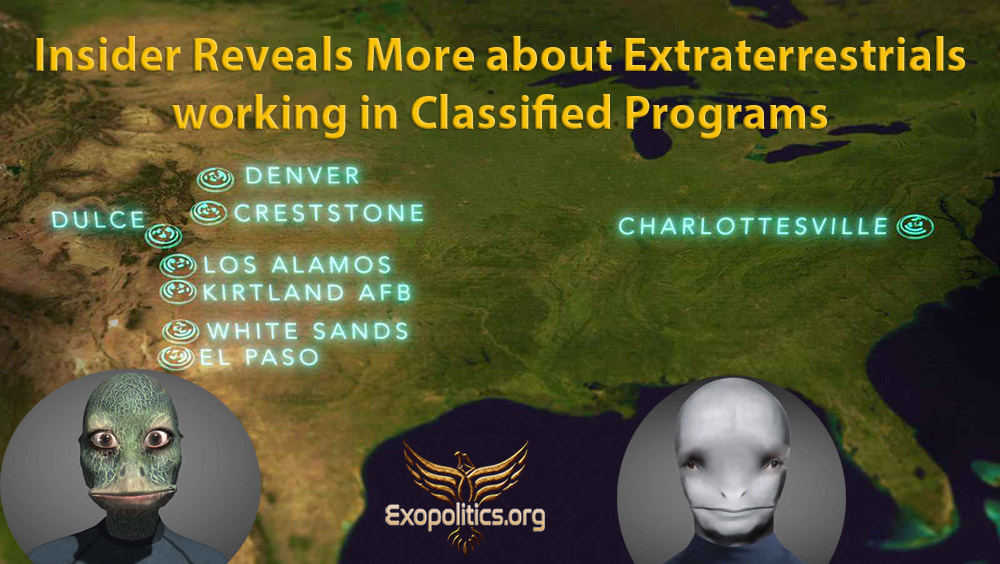 Written by Dr Michael Salla on July 14, 2018. Posted in Featured, science and technology, US Politics

Emery Smith, a former US Air Force Surgical Assistant, has revealed more about his knowledge and face to face interactions with extraterrestrials he encountered while working on classified programs. He encountered the extraterrestrials at Kirtland Air Force Base, and other classified facilities in New Mexico such as White Sands and Dulce; along with Denver, Colorado and Charlottesville, Virginia, all of which he has previously discussed on Cosmic Disclosure (Gaia TV).

In the July 10 episode of Cosmic Disclosure, Smith talked about encyclopedic databases with extensive information on different extraterrestrial races he was shown after he began working on the classified programs in 1992 while stationed at Kirtland AFB:

After a few years in the projects and your clearance gets up and you’re getting briefed on different scenarios and different types of extraterrestrials where they’re saying they’re extraterrestrials or beings from other than Earth origin, and also getting access to the most amazing libraries of encyclopedias that they have there – it’s all on computer mainframes – you get to really understand that we’re just a small, small part of such a wide and vast array of other beings that are spread out through the universe and multiverse.

Smith’s information dovetails with what Corey Goode, another insider discussing classified programs involving extraterrestrial life and technology, says he encountered while working on a U.S. Navy created secret space program. Goode says he was given access to smart glass pads which contained classified encyclopedias on extraterrestrial life and advanced technologies. Similarly, Clifford Stone, another whistleblower/insider says that he was given access to a First Aid manual with extensive medical data on 57 extraterrestrial races while working on a classified crash retrieval programs, Project Moon Dust and Operation Blue Fly, during his U.S. Army service from 1969 to 1990.

Smith’s information is consistent with the revelation of an anonymous archivist who described being employed in the mid-1980’s for a six month period to professionally catalogue files about extraterrestrial life and technology possessed by a major aerospace company (later revealed to be Rockwell International).

In an interview with Project Camelot in May 2006, Mr X described his main purpose in cataloguing all kinds of records concerning extraterrestrial life and technology:

Two years after his initial interview, Mr X died in mysterious circumstances, and his identity was never publicly disclosed.

Mr X helps us understand the role of corporations in developing encyclopedia-like databases used by those working inside classified programs such as Smith, Goode and Stone. It’s worth emphasizing that Rockwell’s aerospace  business was taken over by the Boeing Corporation in 1996.

This means that the Boeing company, either through Phantom Works or another highly classified division, prepares the encyclopedia-like databases describing different extraterrestrial races that Smith, Goode and Stone had previously witnessed.

One of the races that Smith discussed at length in his July 10 interview with David Wilcock on Cosmic Disclosure are Reptilians who he says he encountered while working at classified facilities:

David: And you actually see lots and lots of stone inscriptions of what looks like humans, but then they have like a Reptilian tail like a snake. So do you think that these benevolent Reptilian ETs that you were talking about could have been there at the time of the Indian civilization where those texts were written?

So I agree that these Reptilians I’m associated with that I know are this . . . a little bit more docile, hybrid-type, human-type figures, and they were looked up [to] as gods.

David: Now, it’s also interesting because Pete Peterson did say that there was a benevolent Reptilian race as well. And he had told me that they were very keenly interested in our religious development, our spiritual development, that they were very wise, very advanced, and they really seemed to want us to become ethical and to learn how to all get along with each other.

Emery: Yea, I can concur with that. They do have a religious background that I don’t know everything about. But they’re very strong about it and they do carry amulets and jewelry that show their belief in this system.

They also have sometimes special clothing for certain holiday-type things that they may wear, such as a scarf or a ribbon on their arm. And these things celebrate this religion that you speak of, which is the unity of all and one that they believe in.

And they believe even though they’re of different genetic DNA, they also believe that everyone HAS their DNA. And they believe in the system that they were kind of the first ones in the solar system and universe that actually seeded it. And over billions of years, other formations of their genetic lineage has mixed around and is actually where WE come from.

And that’s why you see sometimes in the medical society of people saying, “Well, we have the reptile part of the brain and this because we’re associated with an iguana or something.

So it’s very funny that this is all coming out in the questions that you ask because I do believe there’s a correlation with this race, and we might have a little bit of that DNA in us to some extent…. The existence of an indigenous race of highly intelligent Reptilian beings that is involved in classified military/corporate programs has been discussed by many others.

My own research into the existence of an intelligent indigenous Reptilian race began with reports of human rights abuses occurring at the classified Dulce base facility, in New Mexico. In The Dulce Report (2003), I discussed how an indigenous Reptilian helped an alleged security guard, Thomas Castello, escape and tell the world about what was happening there.

Veteran Cryptozoology researcher, John Rhodes, has written extensively about Reptilians/Reptoids and his website has many articles that will help inform readers about what people all over the world have experienced in hundreds/thousands of encounters with intelligent Reptilian beings.

It’s important to point out that Smith had no knowledge of an aggressive off world Reptilian race called the Draconians (likely the “Rakshasas” depicted in Vedic Indian texts). In contrast, both Corey Goode and William Tompkins have discussed Draconians as an imperialist extraterrestrial race that formed an alliance with Nazi Germany to establish a base in Antarctica using advanced antigravity technologies.

In my Dulce Report, I discussed how the Draconians, according to Castello, were in charge of the base there, and were using indigenous Earth Reptilians (the “Nagas” in Vedic Indian texts), to run the facility, where many abuses were occurring.

After discussing his knowledge of the Reptilians and his interactions with them at classified military/corporate facilities, Smith next talked about highly intelligent aquatic races that are extraterrestrial origin:

I think maybe I should talk about the more liquid-state planets that are associated with ETs. You know, everyone thinks ETs are all just of the 3D in this Earth-air atmosphere, and it’s not the case.

You have beings that have to live in water or come from a water planet. You have these types of beings that come from the Pleiades system, and we call them Aquafarians – some of the first of these extraterrestrials that live in water. They don’t need to, but their planet is 98% water.

He said that the “Aquafarians” originate from Pleiades and Sirius star systems:

The Aquafarians started in the Pleiades and then migrated, I know, to Sirius section. I don’t know where in there, but I’m only telling you what I’ve read from the history of being in that library.

And I was fascinated, of course, with dolphins and whales. I have a really good connection with them. I’ve done a lot of underwater photography and have a great bond with these fish and the mammals.

Smith went on to assert that there are aquatic races that are indigenous to Earth who he also worked with at Kirtland and other classified facilities. He said that many legends about Mermaids are based on people accidently interacting with them, as the following dialogue with Wilcock illustrates:

David: Now, just to be clear, these are extraterrestrial live coworkers that you’re seeing on these bases, correct?

Emery: Yes…. And I think this is maybe where the mermaids come from. You know, I think this mythological background of the history of these sailors seeing these beings could possibly have had a base here on the planet.

And there’s a lot of cities that people are discovering, but the Cabal does not let people know this, that are underground, and it wasn’t because they were flooded. It’s because that’s where they really were – these cities – under the ocean. I’m sorry, under the ocean.

In the July 10, Cosmic Disclosure interview, Smith went on to give detailed descriptions of the different types of Aquafarian races he encountered, and even of the underwater autopsies he participated in. Smith’s revelations of him working with different types of extraterrestrials at classified facilities reveals the extent of diplomatic agreements that these races have secretly reached with the U.S. and other major nations. In an earlier article, I explained how these agreements may have legal standing under international law, despite never being ratified by the U.S. Senate.

Extraterrestrials have been secretly working with different elements of the military industrial complex in classified facilities for decades. The fact that many of these advanced extraterrestrial related projects are under the control of major aerospace companies who operate in strict secrecy with little to no government oversight is a major cause for concern.