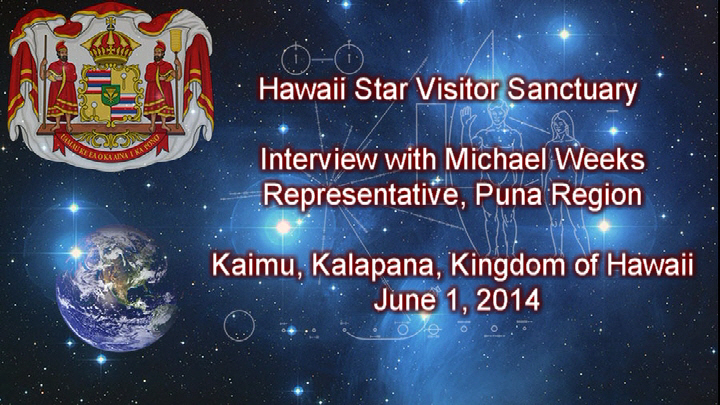 Written by admin on June 7, 2014. Posted in exopolitics activism Representative Weeks explains how the inherent sovereignty of Hawaiian nationals continues to exist despite the overthrow of the Kingdom’s government. He explains that in March 1999, the Kingdom of Hawaii government was reinstated by Hawaiian nationals in grass roots elections as an expression of their inherent sovereign right. The Reinstated Kingdom comprises a government headed by a Prime Minister, Henry Noa, two houses of parliament, and a revised Kingdom of Hawaii Constitution.

Representative Weeks relates his own personal experiences concerning ancient Hawaiian legends of the Kingdom of Mu/Lemuria and the connection to the Pleiades star system. He says that these legends spoke of a time when Pleiadians interbred with the ancient Lemurians who were the ancestors of modern Hawaiians.

Representative Weeks went on to explain why the Reinstated Kingdom of Hawaii has sovereignty over newly created land by recent volcanic lava flows that is designated for the Star Visitor sanctuary. He describes the importance of the Kingdom’s historic tradition of neutrality for welcoming extraterrestrial life. Finally, Representative Weeks explains the choice of June 27, 2014 for the launch of the Sanctuary which coincides with the next new moon.

On Friday, June 27. 2014, there will be an open public ceremony dedicating the land assigned for the Hawaii Star Visitor Sanctuary, in accordance with Hawaiian tradition. The ceremony will occur on the first day of a Hawaiian Sustainability event scheduled for June 27-29, at Uncle Roberts, Kaimu-Kalapana, Kingdom of Hawaii. An exclusive interview with (Uncle) Robert Keli’iho’imola, Sr., a noble within the reinstated Kingdom of Hawaii, is available here.