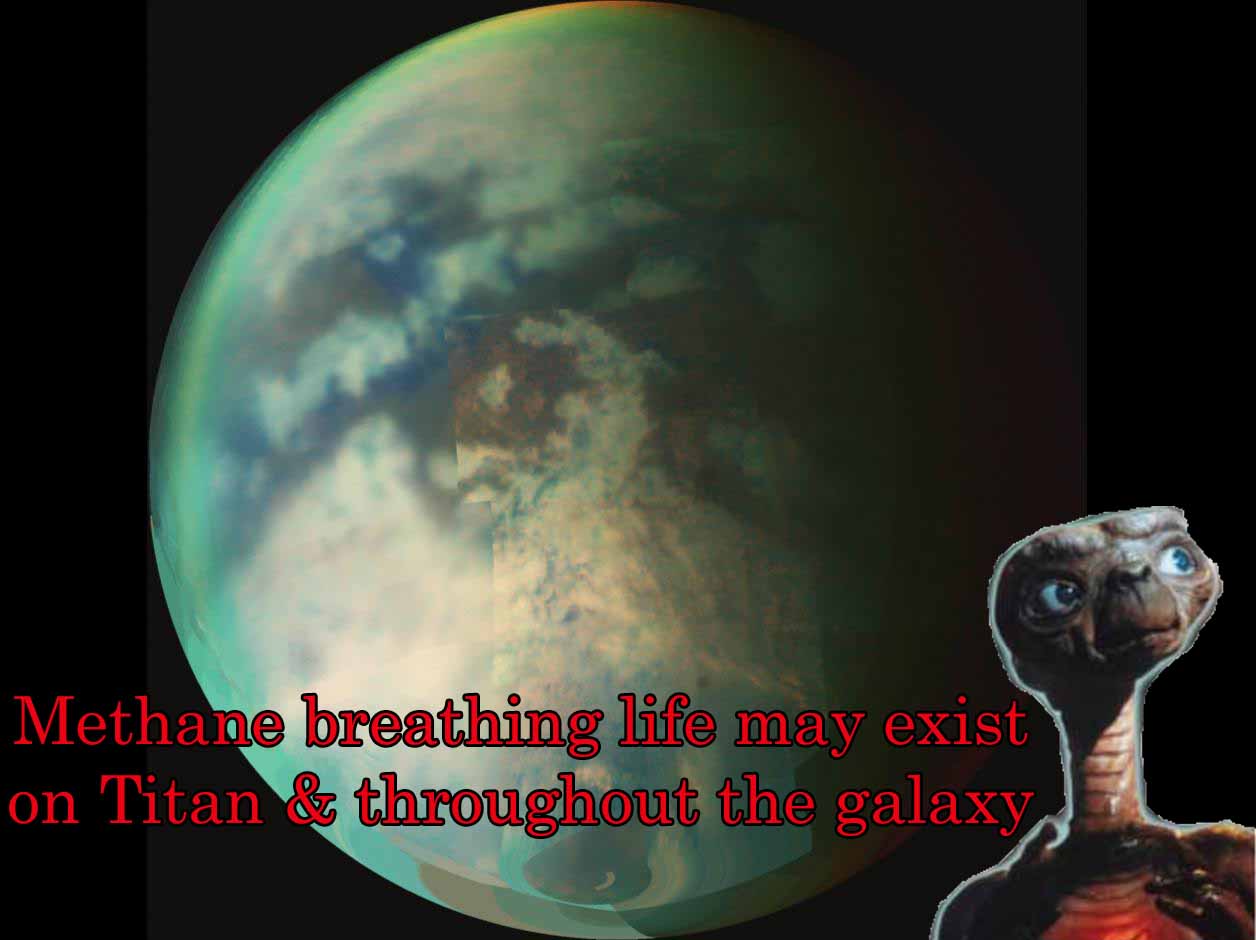 Methane breathing aliens on Titan possible according to Cornell scientists

Written by Dr Michael Salla on February 28, 2015. Posted in science and technology A team of scientists from Cornell University have developed a sophisticated model that suggests extraterrestrial life may be found in the methane oceans of Saturn’s largest moon Titan. Their model was published in the academic journal, Science Advances on Feb 27.  Just as marine life on Earth can extract oxygen from oceans to fulfill basic biological needs, so too life on Titan could extract methane from the oceans to reproduce and metabolize.

According to a public release by Cornell University, the model suggests that methane-breathers of Titan would be able to flourish in very cold environments:

Taking a simultaneously imaginative and rigidly scientific view, chemical engineers and astronomers offer a template for life that could thrive in a harsh, cold world – specifically Titan, the giant moon of Saturn. A planetary body awash with seas not of water, but of liquid methane, Titan could harbor methane-based, oxygen-free cells.

The surprising breakthrough in modelling radical new forms of life by Cornell University scientists gives support to an unlikely source of information about extraterrestrial life. Alex Collier claims that he was contacted by extraterrestrials from the Andromeda constellation and was told that methane life forms exist throughout the galaxy.

In a 2002 lecture interview discussing galactic history according to the Andromedans, Collier said:

Hydrogen ecosystems are much more abundant as is methane because they are not complicated ecosystems.  O2 ecosystems are very complex, the most complex in the galaxy…. according to the archeological record, other life forms, sentient life forms, reptilian, human, plasmic, methane life forms all began to appear; and do appear in our galaxy in full form.

The Cornell university scientific model helps corroborate Collier’s claims that methane-breathing life forms have appeared throughout the galaxy, and have developed high degrees of intelligence.

The recent Cassini mission to Titan showed that it is the only body in the solar system which, like Earth, has a rocky surface with liquid oceans. NASA released photographs of Titan in 2013 that enabled scientists to estimate the size and depths of its oceans.  NASA is currently studying the possibility of sending a submarine to Titan to explore its methane oceans. According to Discovery News:

Envisaged as a possible mission to Titan’s largest sea, Kracken Mare, the autonomous submersible would be designed to make a 90 day, 2,000 kilometer (1,250 mile) voyage exploring the depths of this vast and very alien marine environment.

If the Cornell scientists’ model is correct, a future NASA mission to Titan may find life flourishing in its oceans. If Collier is correct, alien life on Titan may have reached a degree of complexity that will greatly surprise Earth scientists and lead to a radical new understanding of how different forms of intelligent extraterrestrial life may be flourishing throughout the galaxy.