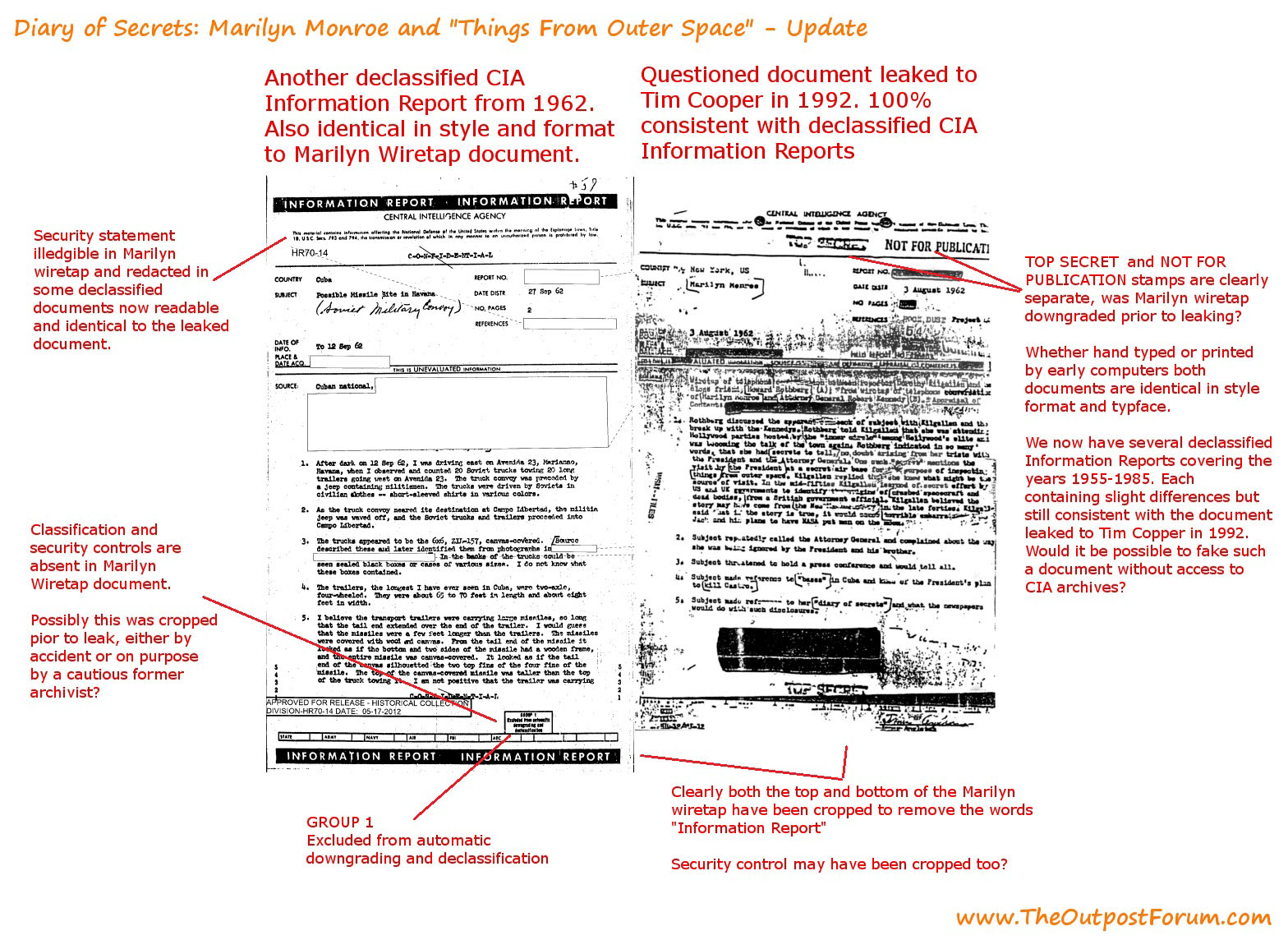 Written by Dr Michael Salla on May 21, 2014. Posted in exopolitics research On May 19, 2014 Lee Nicholson from the popular Outpost Forum, announced the results of a detailed analysis of more declassified documents from the CIA electronic archives that help confirm the validity of a leaked document allegedly of a CIA wiretap of Marilyn Monroe and her closest friends. Monroe had been under CIA surveillance due to her friendship with the Kennedy brothers and communist sympathizers up to the time of her mysterious death on August 5, 1962, two days after the Wiretap document. The Wiretap document is a summary of her recent phone conversations where she planned a “tell all” press conference revealing President Kennedy’s secrets and knowledge about a retrieved UFO at a USAF facility. In response to a critical analysis of his initial article about his research at the CIA electronic archives, Nicholson analyzed further CIA documents that addressed the criticisms and published the results. His conclusion is that the Wiretap document matches authentic CIA documents so closely “that it could not have been faked without access to CIA archives.” Consequently, the leaked wiretap document is either an authentic CIA document leaked to the public, or a document that was created by some with access to the CIA archives who likely had authorization to do so.

In response to Nicholson’s first article released on April 14, four key points emerged in a critical analysis of his research. These were:

1. All CIA documents from that time frame contained a phrase on the bottom of the page which stated: “Automatically declassified by code xxxx on xx/xx/xxxx.” This is noticeably absent on the Marilyn wiretap document. 2. The classification “Top Secret – Not for publication” never appeared on documents. It is a non sequitur. The ranking of a document as “Top Secret” is and of itself the actual highest ranking, higher even than any document containing other code names or phrases along with the Top Secret stamp. 3. The document is also missing a border color. It should have a blue stripe on it. 4. The CIA was not using typewriters in 1963. By that time everything that was typed came from either teletype machines or by early computers and printers.

One thing we can say for sure is that our leaked document has been cropped both top and bottom, it does not contain the words “Information Report”, this may have been done accidently or on purpose by the individual that leaked the document. With regard to the second point, Nicholson found multiple classification stamps on CIA documents. This signified that documents are routinely downgraded and stamped accordingly prior to release. He provided an example of a CIA document with multiple security stamps. He wrote:

It is my contention therefore that the Marilyn Wiretap was initially classified Top Secret but was later downgraded prior to leaking, at which time the second “NOT FOR PUBLICATION” stamp was added.

Regarding the third point, of a missing border color, Nicholson points out that it is missing due to the document being cropped prior to being leaking.

Finally, with regard to the document being created using a type writer or teletype machine, Nicholson analyzed the fonts of the leaked document and declassified CIA documents and found them to be virtually identical with each other as he demonstrated in a comparison graphic. He wrote: Whether the Marilyn wiretap document was hand typed or printed is really as moot point, as either way it is 100% consistent with declassified CIA Information Reports …

Nicholson’s conclusion from his analysis of a number of declassified CIA Information Reports is that the Monroe wiretap document was an Information Report subjected to a review prior to its dissemination. Nicholson suggested:

… either a semi-official declassification process occurred, in the case of a sanctioned release. Or an extremely cautious and experienced archivist sanitized the document before it was passed to Tim Cooper in 1992, if the document was smuggled out and leaked without consent.

The implications of Nicholson’s research are staggering. Authenticating the allegedly leaked CIA Wiretap document shows not only that Monroe was under official surveillance by the CIA, but that her death was more than likely linked to her planned tell all press conference. Monroe’s knowledge that President Kennedy had seen artifacts from a crashed UFO housed at a classified Air Force facility would have shocked the nation then. Today, such knowledge not only helps explains Monroe’s mysterious death two days after the Wiretap document date, but also casts light on JFK’s assassination just over a year later.