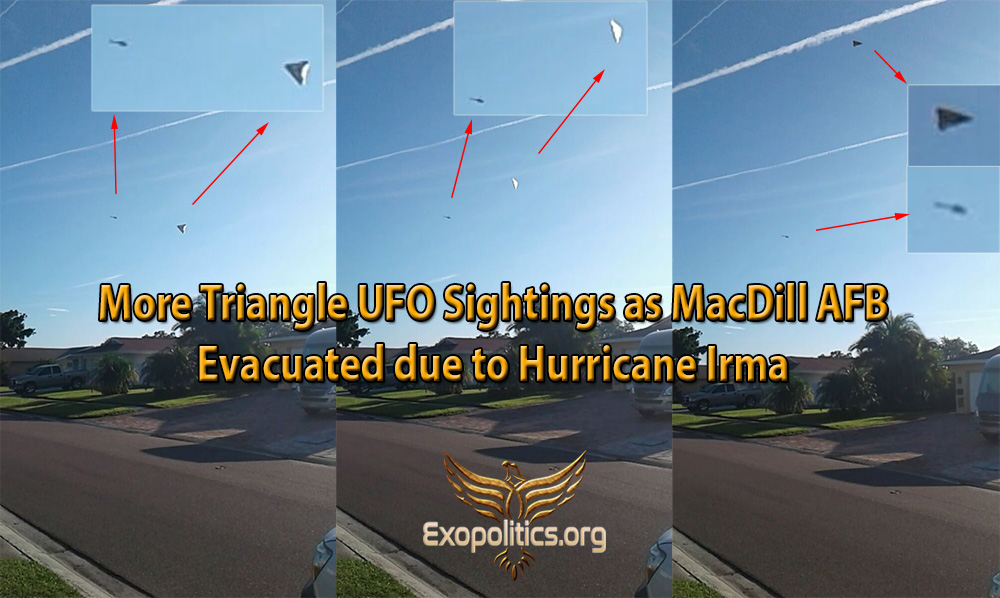 On September 8, a mandatory evacuation order was issued for MacDill Air Force Base in response to the imminent impact of Hurricane Irma, which is now projected to make landfall in southern Florida on Sunday morning. As most MacDill military and civilian personnel begin the evacuation, sightings of flying triangles allegedly from MacDill continue to be sighted and photographed, this time with a military helicopter nearby. This raises the possibility that the USAF is conducting classified operations related to the incoming Irma.

The evacuation orders went into effect at 12 pm EST, September 8, and will remain in effect until no later than March 6, 2018.  Colonel April D. Vogel, Commander of MacDill signed the “Limited Evacuation Order“: Significantly, the evacuation order is for mandatory for all personnel except for those involved in “mission essential” activities:

Personnel who are not designated as members of a ride-out team but who are deemed mission essential or required to remain past 1200L 8 Sep 2017 by their commanders to perform mission related duties will be excused from this evacuation order until they are cleared for release by their commander.

MacDill is the home of US Special Operations Command, whose covert operations span the globe and allegedly use advanced antigravity spacecraft.

In a series of three prior articles (see parts one, two, three), I have presented photographs of triangular shaped UFOs taken by JP (a pseudonym) who I have known for nine years, and deem to be a very credible source.

On September 7, JP sent me another series of photos (six) of a triangle UFO sighted near MacDill, which was being shadowed by a military helicopter in what appeared to be a sanctioned military exercise or escort. Notably, JP described that the triangle craft was at times stationary. Photo analysis shows that the triangle craft are not propeller driven drones or kites of any sort. Three of the photos sent by JP, with triangle and helicopter enlarged. Click image to enlarge.

Here is what JP said in his Skype message to me yesterday that was sent at 9:23 am EST: The series of photos once again clearly show a triangular shaped UFO. JP estimated that the triangle craft was 100 yards from the helicopter, 500 yards away from him, and 300 yards in elevation. He estimated the triangle craft’s size as around 50-70 feet (17-23 meters/yards). All this occurred about 4 miles (6.5 km) away from MacDill.

In my discussion with JP, I pointed out that the TR-3B was approximately 600 feet (200 meters) wide according to reports by Edgar Fouche, a whistleblower who has worked at Nevada’s Area 51 facility.

JP answered that the craft he saw was very similar in size and shape to ones that had previously picked him up in military abductions related to his claimed extraterrestrial contact experiences.

JP explained that the interior of the craft seated three people in capsules that were designed to stay upright no matter what position the ship was in, like a gyroscope. This would enable the pilots to see forward in terms of where the craft was traveling or move to whatever direction they wanted to see, no matter the ship’s orientation to external objects. When carrying a passenger, one of the capsules would stay in a horizontal position.

In addition, JP described the capsules as having “a mind of their own” in so far as they would automatically adjust to a person’s body shape. The capsules had a control panel that one or more pilots could use to navigate the craft. The craft did not have windows, but used a technology which allowed the pilots to see through the metal alloy. In my previous article, JP pointed out that he was directed by a mysterious figure in an unmarked black car to look up, and only then he saw one of the triangle craft on September 6.

This suggests that covert operatives out of MacDill wanted JP to have these sightings and report them, thereby making it known that Special Operations Command do possess antigravity triangle-shaped vehicles.

Given the approach of Hurricane Irma, it appears that Special Operations Command is conducting surveillance and possible mitigation operations. The evacuation orders for MacDill AFB exempts those involved in “mission essential” activities, which would include these piloting and maintaining antigravity flying triangle vehicles.