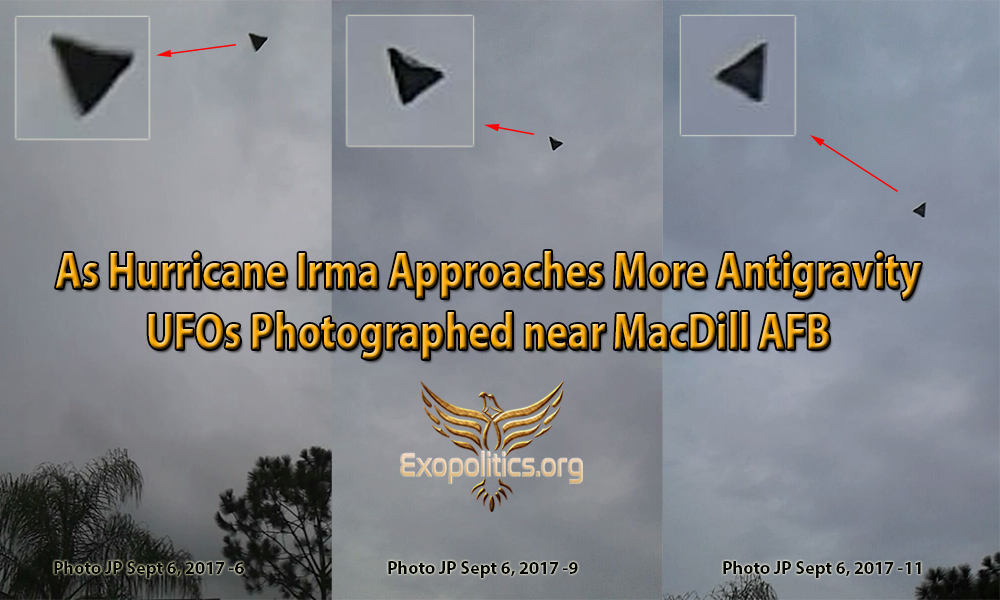 On September 5 and 6, more flying triangle shaped craft were photographed in the vicinity of MacDill Air Force Base in Tampa, Florida, which is the home of US Special Operations Command. The sightings are happening at the same time as Hurricane Irma was heading directly for Florida, among the locations where it has been predicted to make landfall is Tampa.

On the morning of September 5, I was contacted by JP (a pseudonym), who I have been communicating with for nine years and believe to be a credible source, about the unique circumstances that led him to take more photos of a triangular shaped craft in the vicinity of MacDill AFB.

JP said he was prompted to look in the direction of the UFO by a mysterious figure driving an unmarked black car, who appeared to want him to see what was happening, and take photos. Here is what JP said about the incident in his Skype communication to me at 10:16 am (Hawaii Standard Time) about 30 minutes after the incident occurred at 3:45 pm EDT (09:45 HST): On the right is the clearest from of a group of five photos he took of a triangular shaped craft he photographed after the incident with the mysterious individual driving the black car.

The connection with MacDill and the craft was discussed in previous articles about JP’s photographs of triangular UFOs published on September 1 and September 4.

In the September 1 article, I discussed JP’s claims that he has been taken on antigravity craft from MacDill; and how an alleged covert operative out of MacDill has befriended him, and been revealing details of some of his classified missions with a USAF Secret Space Program.

On September 6 (today), from 7 to 7:15 am (EDT) JP took a series of nine photos, which very clearly depict a triangle shaped craft that appears to be the famed TR-3B antigravity craft.

Below are three photos from the series taken on September 6, which most clearly show the alleged TR-3B, which JP claimed to be weaving in and out of the clouds. The triangle shaped UFO/TR-3B sightings are happening at the same time as Hurricane Irma was heading directly for Florida, among the possible locations where it may make landfall is Tampa.

Here is what the Tampa Bay Times had to say about the Hurricane situation on September 5:

Every weather update brings more bad news. It looks more and more likely that Hurricane Irma will hit Florida, but exactly where is hard to say. Some models show landfall around Tampa Bay while others call for a hit closer to Miami.

Below is a local Fox news weather map depicting possible routes for Hurricane Irma, three of which take it right over Tampa. The possibility that Tampa, Florida may turn out to be where Irma makes landfall on the Florida coast raises an intriguing possibility. Is Hurricane Irma linked in some way with the triangle UFO sightings, which appear to be sanctioned by US Special Operations Command as a means of disclosing the existence of a USAF secret space program?

[Update 9/21/17 – Questions have been raised about the authenticity of the composite pictures I have created using the original photos provided to me by JP. The composite photos were created using Adobe Photoshop where I added text and did a close up of the UFO that was inserted at the top of each of the three originals. There has been no photoshop manipulation of the objects themselves, which can be seen by viewing the originals which are available below. Click images to enlarge.