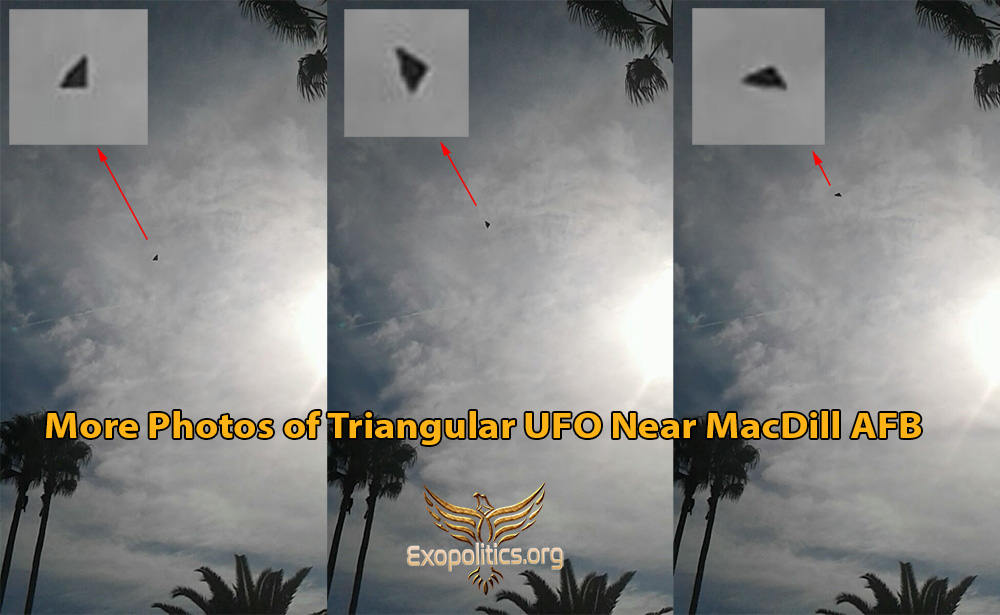 More Photos of Antigravity UFO near MacDill Air Force Base

Three more photos of a triangular UFO taken near MacDill Air Force Base were today sent to me for analysis. The photos were taken around 9:50 am, on September 4, about 10 miles from MacDill, which is the home of US Special Operations Command. The photographer, JP (a pseudonym) says that he took the photos over a three second period, and observed the craft for about 9 seconds in total.

During this time period, the craft hovered and slowly moved towards the right. JP then says that the craft disappeared, in a right to left fashion. This indicates that the triangular craft either used cloaking technology that would move from one end to the other end of the craft, or had entered a larger cloaked vehicle. The three photos appear to show a different type of triangular craft to that photographed by JP on August 31 in a series of six photos. The August 31 craft appeared to have large fin of some kind before powering up with a circular type propulsion system, and shooting away into the upper atmosphere. My analysis suggested that this was likely a variation of the TR-3B craft based on the revelations of Edgar Fouche, a former employee at Area 51. The September 4 craft disappeared using some kind of cloaking technology. JP, who claims to have been subjected to multiple military abductions in covert spacecraft, believes the photographed craft is similar to those that have taken him in the past.

As discussed in my previous article, I have known JP for nine years and can vouch for the authenticity of these photos and his credibility as a witness. While there are variations in appearance and behavior of the craft photographed on August 31 and September 4, it does appear that they are part of a Secret Space Program operating out of MacDill AFB.

[Update 9/20/17 – Questions have been raised about the authenticity of the composite pictures I have created using the original photos provided to me by JP. The composite photos were created using Adobe Photoshop where I added text and did a close up of the UFO that was inserted at the top of each of the three originals. There has been no photoshop manipulation of the objects themselves, which can be seen by viewing the originals which are available below. Click images to enlarge.