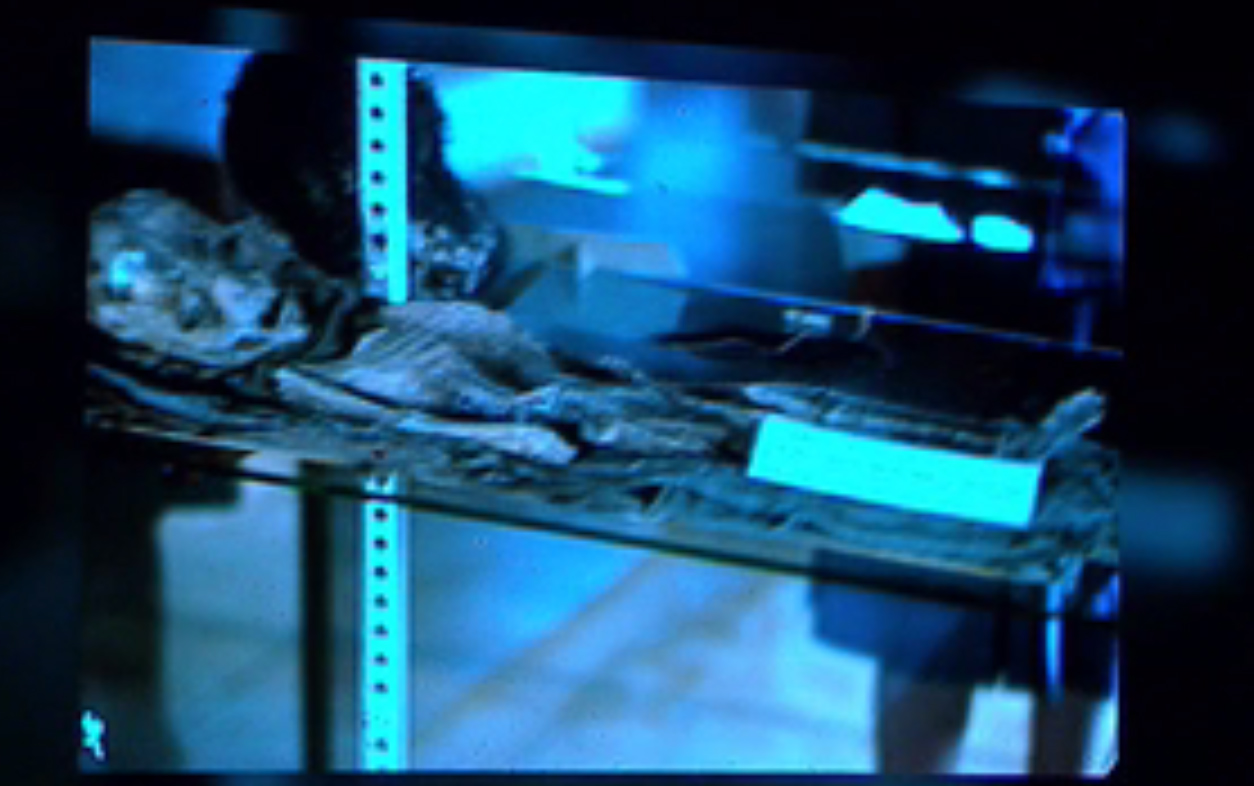 Written by Dr Michael Salla on May 6, 2015. Posted in exonews On May 5, two photographic slides were publicly released at an exclusive live-streamed event in Mexico City’s National Auditorium showing an alleged extraterrestrial body retrieved from the 1947 Roswell UFO crash. The photos were taken on a Kodachrome film by Bernard A. Ray, a former oil exploration geologist, and stored in his attic for over 50 years before being found in 1998 after his death. The Mexico City event was organized by Tercer Milenio, a highly popular Mexican television program  and attracted world attention with advance notice by Britain’s Express and Mirror  newspapers on Monday.

The two slides have been examined over a three year period by a number of photographic experts, forensic pathologists, and UFO researchers whose testimonies were presented at the Mexico City event. Among the researchers were veteran Roswell UFO crash researchers, Don Schmitt and Tom Carey, who presented their reasons for why the slides (forensically dated to the 1947-1949 period) fit with the chronology of events at the time and are genuine,

Among the filmed videos of witnesses presented was a former US Army serviceman who was present during the Roswell UFO crash incident. He claims to have witnessed alien bodies retrieved from the Roswell crash, and said that the two photos were “very close” and “very very much what I saw.”

The first slide [see above] shows what appears to be an alien body lying horizontally on a glass shelf in a display of some kind. The being is approximately 4 feet tall, with a small mouth, large eyes, enlarged skull, with thin arms, legs, and torso. Its internal organs have been removed suggesting the photo was taken after an autopsy.

The Mexico City event featured the analysis of several medical and photographic experts. Among them was Dr Richard Doble, a former Canadian academic and forensic pathology consultant with the Royal Canadian Mounted Police, who said that the being at first glance appears like a deformed human. At closer examination, however, he pointed out that the being is clearly not a human being since it has only four pairs of ribs rather than the 12 in a normal human being. He also said that the bone structure of the feet and hands are also very different to a human, along with a number of other significant anatomical differences. Second slide of extraterrestrial entity after medical autopsy. Screenshot from live stream of Tercer Milenio event on May 5, Mexico City.

The filmed testimony of Dr Edgar Mitchell, the Apollo 14 astronaut, was also shown. After viewing the two photos he said they are consistent with what he has been told about the extraterrestrials found at the Roswell UFO crash by first hand witnesses who had confidentially told him what they had seen.

Exhaustive investigations by other photographic and medical experts have concluded that the photos are genuine. The experts list presented at the Mexico City event include Dr David Rudiak, an expert in photgraphic analysis, Dr Donald Burleson, a specialist in computer enhancement; Ray Downing, materials expert from the Studio MacBeth, New York; Col Jeffrey Thau associated with the Pentagon’s Photo Interpretation Department, and Prof Rod Slemmons, a former Director of the Chicago Museum of Contemporary Photography,

Though the autopsied being in the photos is some form of humanoid, it is clearly not a homo sapien. The being’s association with a crashed UFO vehicle suggests that is not a previously unknown humanoid from earth, but an extraterrestrial biological entity.

According to Jaime Maussan, the Mexico City event organizer, the two Roswell alien photo slides are a game changer. Their release marks the first time that hard evidence has been found concerning the Roswell UFO crash and been released to the general public. The photos may finally be smoking gun evidence that an interplanetary spaceship crashed in July 1947 near Roswell, New Mexico, and U.S. military officials have orchestrated a high level national security cover-up ever since.

[Update 5/12/15 – one of the principal advocates of the alien body thesis, Anthony Bragalia, has changed his mind and apologized after evaluating results of anti-blurring software used on the small placard which was deemed by experts to be unreadable. According to Bragalia, the placard refers to the mummified body of a two year and not an alien. The debate continues however with other Roswell UFO researchers still maintaining the authenticity of the two slides as showing the remains of an alien body.