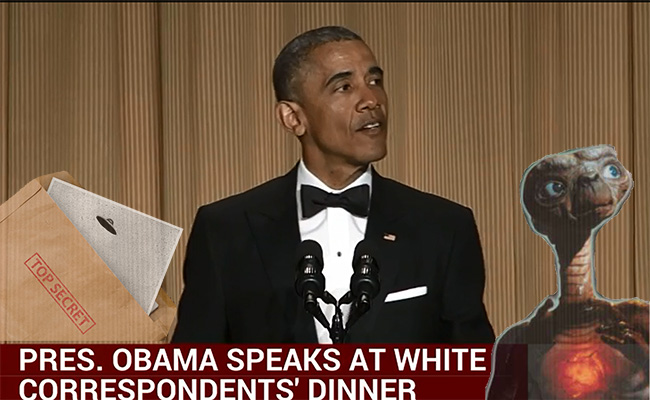 Written by Dr Michael Salla on April 27, 2015. Posted in exonews On Saturday night, President Barack Obama gave a joke filled speech at the annual White House Press Correspondents dinner. Fox News covered some of the zingers Obama threw at all and sundry across the partisan political divide. At the top of Obama’s top ten jokes, according to CNN, was the President’s list of recent executive actions, which he humorously suggested was his (rhymes with) “bucket list” intended as an act of defiance against political opponents to his administration’s policies.  Obama signaled that his ‘bucket list’ of executive actions would grow in the remaining 21 months of his Presidential administration revealing the depth of his frustration against political roadblocks to his policies and legacy.

Obama and one of his former senior advisers, John Podesta, have recently publicly stated that among the administration’s political frustrations is a lack of progress on the release of classified UFO files concerning extraterrestrial life and technology. These recent statements signal that among the executive orders Obama is contemplating to help establish his Presidential legacy, is decisive action on extraterrestrial disclosure.

I am determined to make the most of every moment I have left. After the mid-term elections my advisers asked me, “Mr President do you have a bucket list?” I said well, I have something that rhymes with bucket list. Take executive action on immigration? Bucket. New climate regulations? Bucket. It’s the right thing to do.

On March 12, Obama revealed on Jimmy Kimmel Live that his and previous Presidential administrations have been prevented from releasing the truth about extraterrestrial life and technology. In response to Kimmel’s question about how he would seek to gain access to UFO files and Area 51 if he were president, Obama claimed:

When Kimmel protested that President Clinton said he had looked into Area 51 and found nothing, Obama replied, “That’s what we’re instructed to say.”

Obama’s comments were widely dismissed as a joke by the mainstream media. Ben Hansen, a former FBI special agent, however, conducted a forensic analysis of Obama’s body language and speech, and concluded that he was showing great stress in revealing some uncomfortable truths.

It’s important to mention that on Feb 13, John Podesta, Obama’s counselor for energy policy and the environment tweeted:

Podesta’s frustration over the inability of the Obama administration to gain access to classified UFO files was almost certainly shared by President Obama.

Podesta’s statement now makes clear the full context of Obama’s later space alien comments on Jimmy Kimmel Live. Obama’s comment that space aliens “exercise strict control over us” and Presidents are “instructed” on what to say about alien life was no joke. He was making an important admission about how Presidents have been regularly frustrated in their efforts to find the truth about extraterrestrial life and technology.

Not surprisingly, there was a remark during the White House Press Correspondents dinner reminding the audience about Obama’s March 12 appearance on Jimmy Kimmel Live. Cecily Strong, the comedian who followed Obama with another humor filled speech before the assembled Press corps, said: “Mr President, thank you so much for taking time away from being on Jimmy Kimmel to be here.”

Was Strong simply making a wry comment about the time Obama spent covering a wide range of topics in his Jimmy Kimmy Live appearance, or was she tipping off the audience that such appearances are when Obama humorously reveals his true position on important issues? Her remark was likely coordinated with Obama speech writers who knew what she would say; or even perhaps asked her to insert the remark to allude to the policy significance of his appearance.

As the Obama administration winds down over the next 21 months, the President has publicly stated his intent to move forward with executive actions on important policy issues that he has been frustrated in resolving through the normal legislative process. Podesta’s UFO Tweet and Obama’s alien comments on Jimmy Kimmel Live, combined with the President’s April 24 speech, signal that Obama is contemplating an executive order that facilitates disclosure of classified UFO files concerning extraterrestrial life and technology.