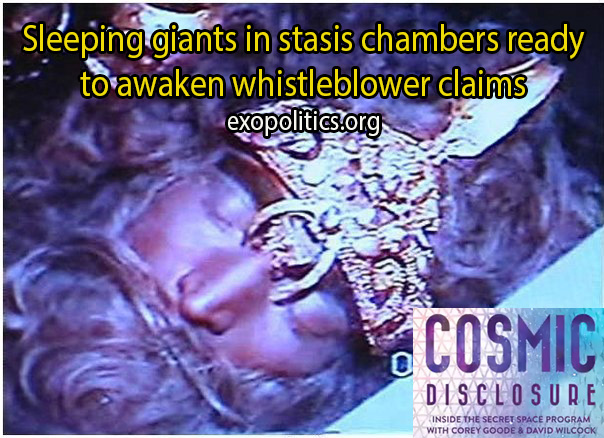 Written by Dr Michael Salla on August 5, 2015. Posted in Exoarcheology In the latest Cosmic Disclosure episode on Gaia TV, Corey Goode makes some startling claims about sleeping giants located in stasis chambers hidden all around the world. He says that during his down-time in secret space program assignments (1987-2007) he would review information on “smart glass pads.” The pads were a Wikipedia-like repository of information that personnel in the Solar Warden and other secret space programs could access about various aspects of ancient Earth history, extraterrestrial life, advanced technologies, etc. Goode described seeing information about giants that once lived on Earth, now sleeping in stasis chambers.

Goode described stasis chambers as being originally built by an “Ancient Builder Race” who used crystal technologies to create time bubbles in which the flow of time on the inside is much slower than the outside. Thirty minutes can elapse inside the time bubble, while 30,000 years speed by on the outside according to Goode. He said that these stasis chambers with perfectly preserved giants inside them had been found all over the world.

According to Goode, the smart glass pads revealed that Abraham Lincoln had seen one of the stasis chamber giants in one of the ancient mounds found across the United States. This is supported by Lincoln himself who said:

The eyes of that species of extinct giants, whose bones fill the mounds of America, have gazed on Niagara, as ours do now.

In support of his remarkable claims, Goode discussed two youtube videos which he had earlier shared with the host, David Wilcock. Goode said he believed they were examples of stasis beings that have been found all over the Earth. The videos were released on Youtube and are in the Russian language. In the first video (below) Goode believes the stasis being has died due to human interference.

In the next video, Goode believes the stasis being is still alive, and in the process of being revived.

The above videos show what appear to be perfectly preserved bodies lying in sarcophagi of some kind. There is no sign of advanced technology other than jewelry placed around the sarcophagi and on the bodies. How credible are Goode’s claims?

The two videos cited by Goode have been subjected to much internet discussion. One of the videos dates to a discovery in 2008 following excavations for a building in the Kurdistan region of Iran. A google translation of a Russian article about the discovery follows:

According to data obtained from the presumptive enough reliable data source photos show found the sarcophagus and find in it the body of an ancient magician. All information supposedly obtained verbally, I have not been tested. Detection time — Spring 2008. As a result of the displacement of ground tomb came to light and the cultural layer of the remnants of the ancient city.

A poster on a discussion forum was able to find a Russian article that discussed the discovery of the bodies in the videos released by Goode. The article gave a revised estimate for the age of the sarcophagus:

On the territory of Iran (formerly Persia, even earlier Perunova Rus) … The above-mentioned artifacts discovered by accident, when building a house. The builders found an underground mausoleum built 10-12 thousand years ago, with three sarcophagi. (later corrected to be about 850 years old)

The name of the ancient magician or magi was “Jaromir” who was said to be “biologically active” – i.e., in some kind of dormant/stasis state.  Ancient manuscripts and an ancient map of Russia were also found in the sarcophagus.

The first of the preserved and/or sleeping bodies does not, however, appear to be a giant in comparison to the human hand in the video. It is hard to estimate size of the being in the second video.  The data used for the videos is said to be reliable, if so, then they are stunning evidence that ancient stasis chamber technology exists, that can and does preserve bodies for extremely long periods of time, just as Goode claimed. There is extensive evidence for the skeletal remains of giants being found around the world, as well as references in the Old Testament. So it’s possible that some giants did make it to secret stasis chambers hidden around the world as Goode claims.

As to the question of why giants or other humans would allow themselves to be put into stasis, centuries or millennia ago, to awaken in our age, Goode claims the answer may lie in cosmic energies that our solar system is increasingly encountering. This is – something he claims secret space programs have been closely monitoring. Goode’s latest Gaia TV interview reveals much fascinating information about ancient giants and stasis chamber technologies, along with more secret space program revelations, which is well worth viewing.

[Update: 8/8/15 – In an earlier version of this article, it was incorrectly stated that Corey Goode referred to the two videos as examples of giants in stasis. In fact, he referred to them as examples of “stasis beings” rather than giants, even though in the rest of his interview he refers to giants in stasis that had been found around the world. Article has been updated accordingly]

[Note: The first two episodes of Cosmic Disclosure are available for free on the Gaia TV website. The first episode is on Youtube.  To watch the whole season of Cosmic Disclosure, you need to subscribe to Gaiam TV. If you subscribe using this link, then a portion of your monthly subscription will go towards supporting Corey Goode as he continues his disclosures. His website is here.]