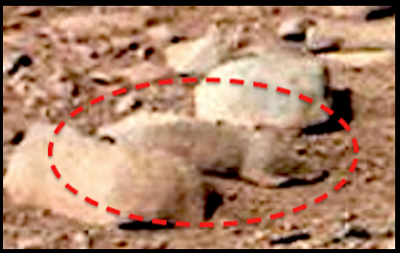 Written by Dr Michael Salla on May 30, 2013. Posted in science and technology Close up of NASA/JPL photo of what appears to be a squirrel/rat on Mars. Credits: UFO Sightings Daily

A photo of what looks like a squirrel or rat on Mars first released in September 2012 suddenly became a hot topic after Fox News covered the story on May 29. Fox was quickly followed by Discovery News, International Business Times and other major news outlets. It appears that the mainstream news is interested in raising the possibility that the Curiosity Rover is capturing images of life on Mars, even though the coverage is slanted towards dismissing such a possibility. In the meantime NASA has remained silent on photographic evidence of animals on Mars from its own Mars rover instruments. According to NASA, Mars atmosphere is 95% carbon dioxide with only a trace amount of oxygen 0.13% – not enough to sustain animal life on Mars. If Mars atmosphere is inhospitable to life what is the Curiosity Rover photographing on Mars – rocks that look like animals, animal life that has somehow adapted to live in the Martian atmosphere, or Earth animals released in secret NASA experiments on Mars?

The Curiosity Rover mission photographed what appears to be a rodent of some kind – a rat or squirrel – back on September 28, 2012. Scott Waring from UFO Sightings was the first to post the story about what he thought looked like a squirrel on December 4. He wrote:

A friend emailed this in to me today … and it’s really amazing and strange. I guess that’s why I love this one so much. It’s a cute rodent on Mars. Note it’s lighter color upper and lower eyelids, it’s nose and cheek areas, its ear, its front leg and stomach. Looks similar to a squirrel camouflaged in the stones and sand by its colors. …

There was no mainstream news interest in Waring’s fascinating discovery. Joseph Skipper from Mars Anomaly Research provided the first detailed analysis of the photo with an article on May 10 where he claimed:

Believe it or not, in the above image shown just a presented [sic] by NASA and with no graphics work in it by me, there is very strong anomalous life evidence of mammal life. The question is it of life on Mars similar to that here on Earth encountered by the Curiosity rover on Mars Sol 52 or, alternatively, is it proof that someone has been messing around with the imaging and managed to miss something very important, something revealing what is really going on with the Curiosity imaging.

In the Fox News story, the writers favored the conclusion that the photo depicted rock with an animal face in it:

Charles Poladian from the International Business Times embraced Fox News explanation  that it was the psychological problem of pareidolia.  Ian O’Neill from Discovery News followed up and mocked the idea that the photo was of a real animal on Mars:

But as you may have guessed, after exercising an ounce of logical thought, what was once a cute furry four-legged creature suddenly becomes… wait for it… this is a good one… a rock. And there you have it ladies and gentlemen: We’ve found a rock on Mars… that looks like a rat.

While the major news media were dismissive that the NASA/JPL photo showed an actual animal on Mars, there was an interesting possibility raised by Scott Waring in an update:

A lot of people are emailing me saying that this squirrel was part of a NASA experiment to test  how long it would live on the surface of Mars and I do believe this does sound like something they might do. Why would they not tell us about it? Because the squirrel would be expected to die eventually and that would get PETA to fight against them in a court of law. SCW

Could animal life survive on Mars in some secret NASA experiment testing adaptability to high carbon dioxide levels? According to the AVMA Guidelines for the Euthanasia of Animals:

Inhalation of CO2 at a concentration of 7.5% increases pain threshold, and concentrations of 30% and higher cause deep anesthesia and death with pro­longed exposure … In rats, un­consciousness is induced in approximately 12 to 33 seconds with 80% to 100% CO2 and 40 to 50 seconds with 70% CO2.

Not all animals immediately succumb to high carbon dioxide and can resist for varying lengths of time according to the AVMA guidelines:

On the day of birth, rats and mice ex­posed to 100% CO2 required exposure times of 35 and 50 minutes, respectively, to ensure death. By 10 days of age, exposure times of 5 minutes were sufficient to en­sure death.272,273 For adult mink, 5 minutes of exposure is sufficient to ensure death using 100% CO2, but not using 70% CO2. Rabbits of the genus Oryctolagus also have prolonged survival times when exposed to CO2.

It’s possible that earth animals released on Mars may survive for extended periods – enough to be monitored in secret experiments.

There are three possible conclusions over the squirrel/rat photo taken on Mars. One, the photos depict rocks that appear to be animals in a case of pareidolia, as sceptics insist. Two, terrestrial animals have been released on Mars in some secret NASA experiment monitored by the Curiosity mission. Finally, the percentage of carbon dioxide and oxygen on Mars is not what NASA is telling us and indigenous animal life exists on Mars.