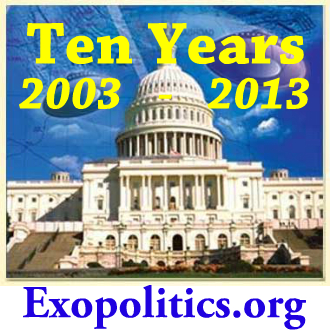 Today marks the 10th anniversary of exopolitics.org which was created on January 20, 2003 on Martin Luther King Day. The date was chosen to celebrate the life and mission of Martin Luther King who was a personal inspiration to me, and whose work had similarities with the new research and life venture that I was embarking on with the creation of Exopolitics.org. Dr King strived for the removal of racial inequality and a restoration of the Constitutional values upon which the United States was created: Life, Liberty and the pursuit of happiness. The main challenge he confronted was the inbred biases of many in the public who were brought up to believe that racial inequalities were a natural part of life. Dr King’s immediate struggle was against institutional policies that upheld racial segregation in the American South. The harder and long term struggle was against the inbred biases that made American citizens resistant to accepting any changes to the racial inequalities that were believed to be an inevitable part of life.

In first being exposed to the reality of extraterrestrial life, and a massive cover up of supporting evidence I saw a similar struggle ahead to what had confronted Dr King in the civil rights arena. After a 20 month period of researching the issues raised from my watching of Dr Stephen Greer’s Disclosure Project Press Conference in May 2001, I decided to change my conventional research interests at American University where I had worked since 1996. In writing my first exopolitics paper, "The Need for Exopolitics: Implications of the Extraterrestrial Conspiracy Theories for Policy Makers and Global Peace", I naively thought it would be welcomed by my superiors at American University. How wrong I was. I was told not to associate the University with exopolitics in any way, and so could not publish my article on my Amerian University webpage. This directly led to the creation of Exopolitics.org . Continued opposition led to my eventual dismissal from American University in 2004 which created significant personal and professional problems in my life.

Ten years after the creation of the Exopolics.org website, I am greatly encouraged by the number of individuals that have become interested in exopolitics, and created exopolitical websites and organizations around the world. Nevertheless, the struggle is still massive and much work needs to be done to expose the extent of the cover-up of evidence of extraterrestrial life. The institutional policies that hide this truth from the American and world publics need to be exposed. More importantly, and more challenging, is the quest to address to inbred public biases that individuals discussing UFOs and extraterrestrial life are somehow on the fringe of society and need to be shunned.

In reality, all studying UFOs and extraterrestrial life are courageous individuals who have dedicated much of their time, and lives in many cases, to finding out the truth despite public dismissal and ridicule. While there will always be differences of opinion and methods among researchers, I admire all who have dedicated their time to UFO and exopolitical issues given the public biases against such interests. I especially appreciate those individuals that have supported my work in many ways, and given me the courage to continue on despite the determined opposition of public institutions and the mass media.

Exopolitics continues to personally inspire me and my research interests. Those visiting exopolitics.org can view online for free the full scope of my 10 years of research – approximately five books worth of material or half a million words. I look forward to what the next 10 years will bring to the field of exopolitics and to my own life. I sincerly thank all that have had the courage to write, speak or commit themselves to investigating and informing others about evidence of visitors from other worlds coming to our small planet. You continue to inspire me and give me cause for optimism over  the tremendous opportunities that lie ahead for us individually and as a species as we boldly step forward to embrace the truth about our cosmic visitors.