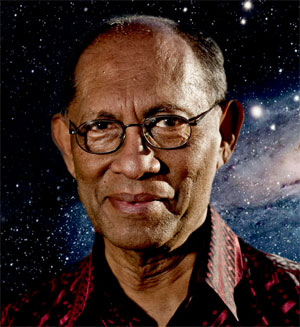 Extraterrestrial fossils found in meteorite according to scientific team

Written by Dr Michael Salla on January 20, 2013. Posted in science and technology A team of four scientists has written an article in the latest edition of the Journal of Cosmology claiming that a meteorite discovered in Sri Lanka contains evidence of extraterrestrial life. Inside the meteorite, according to Professor Chandra Wickramasinghe, the lead scientist and Director of the Buckingham Centre for Astrobiology, are tiny fossil microbes that are extraterrestrial in origin. The findings of Wickramasinghe and his team in their co-authored article, “Fossil Diatoms in a New Carbonaceous Meteorite’," immediately aroused controversy. In an article in the Huffington Post published on January 19, Lee Spiegal addressed the controversy and Wickramasinghe’s response to early criticism.   Critics claim that the meteorite sample examined by Wickramasinghe’s team was very likely contaminated by Earth based algae. This raises suspicion that once again scientists claiming they have found evidence for extraterrestrial life will be subjected to a firestorm of criticism including direct personal attacks from their peers.

Chandra Wickramasinghe is no stranger to controversy. The Sri Lanka born mathematician was the founder of the theory of Panspermia along with British physicist Fred Hoyle. Panspermia is based on the idea that life is spread throughout the universe in the form of microbes carried on the back of meteorites that travel through the interstellar vacuum. Wickramasinghe believes that the Sri Lanka meteorite is vindication for his controversial theory, and has solid scientific evidence supporting his conclusions.

According to the abstract in Wickramasinghe’s and his co-author’s article:

We report the discovery for the first time of diatom frustules in a carbonaceous meteorite that fell in the North Central Province of Sri Lanka on 29 December 2012. Contamination is excluded by the circumstance that the elemental abundances within the structures match closely with those of the surrounding matrix. There is also evidence of structures morphologically similar to red rain cells that may have contributed to the episode of red rain that followed within days of the meteorite fall. The new data on “fossil” diatoms provide strong evidence to support the theory of cometary panspermia.

Basically, diatoms are a form of algae that are mainly unicellar and form large colonies. They are a major producer in the food chain. Finding fossil diatoms in a meteorite is hard evidence that extraterrestrial life not only exists, but is commonly found throughout the galaxy. Not so according to Phil Plait, who launched a preemptive strike before the major media and public had a chance to digest Chandrasinghe’s findings.

Plait’s column in Slate magazine begins with a very unscientific ad hominem attack since he writes in the article that “sometimes an ad hominem is warranted!” According to Plait:

Wickramasinghe is a proponent of the idea of panspermia: the notion that life originated in space and was brought to Earth via meteorites. It’s an interesting idea and not without some merits. However, Wickramasinghe is fervent proponent of it. Like, really fervent. So much so that he attributes everything to life in space. He’s said that the flu comes from space. He’s said SARS comes from space. He’s claimed living cells found in the stratosphere come from space. (There is no evidence at all they do, and it’s far more likely they are terrestrial.) He’s said a weird red rain in India was from space (when it’s been shown conclusively that it isn’t). The list goes on and on. Wickramasinghe jumps on everything, with little or no evidence, and says it’s from outer space, so I think there's a case to be made for a bias on his part.

Plait finally launches into the main substantive criticism he has to offer which comes from an evolutionary biologist who responded to Plait’s request to analyze Wickramasinghe’s article. Professor Patrick Kociolek from the University of Colorado wrote back to Plait:

… the diversity present in the images represent a wide range of evolutionary history, such that the “source” of the diatoms from outer space, must have gone through the same evolutionary events as here on earth. There are no extinct taxa found, only ones we would find living today…for me it is a clear case of contamination with freshwater.

Essentially, Kociolek and Plait are claiming that Wickramasinghe’s data was compromised by fresh water on Earth.

In 1962, [Hoyle and I] pioneered the theory of carbon grains in space to replace the old ice grain theory. This was vehemently resisted by the astronomical community at the outset, but with the dawn of infrared spectroscopy, the ice grain theory gave way to the carbon dust theory… Over a few years, after a great deal of model-fitting, we came to the conclusion that material similar to biomaterial fitted all the available data in astronomy … We considered the possibility that biology (microbiology) had a universal character, and no observations in astronomy or new information from biology has provided contrary evidence.

Regarding Plait’s and Kociolek’s main argument that the meteorite sample was contaminated by earth water algae or diatoms, Wickramasinghe continued: "But — there are also at least half a dozen species that diatom experts have not been able to identify."  This is where Plait’s and Kociolek’s criticism falls short since they can’t explain the origin of all the diatoms found in the meteorite.

This is not the first time that scientists finding evidence of extraterrestrial life in meteorites have been exposed to the criticism that their sample was contaminated by earth based microbial life. In August 1996, David McKay and a team of NASA scientists published their analysis of a Martian meteorite discovered in Antarctica. The meteorite was found to have carbon compounds that looked very much like fossil remains of ancient Martian microbes. Here is how Mackay explained their findings:

The carbonate globules are similar in texture and size to some terrestrial bacterially induced carbonate precipitates. Although inorganic formation is possible, formation of the globules by biogenic processes could explain many of the observed features, including the PAHs [polycyclic aromatic hydrocarbons]. The PAHs, the carbonate globules, and their associated secondary mineral phases and textures could thus be fossil remains of a past martian biota.

The announcement was big news at the time, and led to President Clinton making a statement contemplating the historical significance of the discovery. The 1996 discovery then got bogged down in scientific debate over whether or not the meteorite was polluted by Earth microbes. Critics claimed NASA scientists had not sufficiently accounted for this possibility. Not so according to a new 2009 study by NASA scientists, including McKay, from the Johnson Space Center that upheld the earlier findings and concluded: “None of the original features supporting our hypothesis for ALH84001 has either been discredited or has been positively ascribed to non-biologic explanations."

Wickramasinghe and his team have just begun the effort of defending their results from criticisms that their meteorite sample was contaminated, and their data therefore inconclusive. Given that controversy still swirls around the 1996 Mars meteorite case, we can expect the same for Wickramasinghe and his team’s claim of finding evidence of extraterrestrial fossils on a meteorite. It may be some time before scientists are willing to concede that Wickramasinghe may have just verified his theory of panspermia.