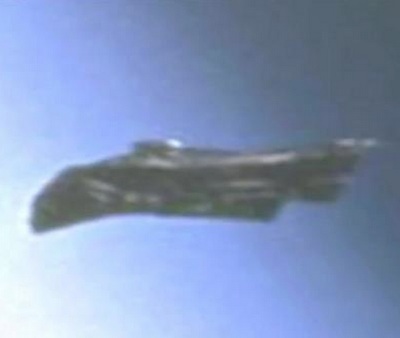 In a news alert issued today, NASA has been caught deleting photos from its website of what is unmistakable evidence of a UFO. The UFO photos first appeared on the NASA Johnson Space Center website in May 2011 and clearly showed a spacecraft of some advanced design. Without any fanfare, the photos were uploaded and stayed on the NASA website for over a year and half until being recently removed. According to Scott Waring from UFO Sightings Daily, the photos were initially leaked by someone in NASA wanting to get the word out about UFOs. The removed photos with original links to the NASA/Johnson Space Center website can now be found on UFO Sightings Daily. The removal of the digital photos supports claims by whistleblowers that NASA regularly removes evidence of UFOs from its website that are extraterrestrial in origin.

Here is what Waring had to say about the photos when they were first discovered on NASA Johnson Space Center website:

Take a look at these amazing photos that were leaked out of NASA Johnson Space Center. The quality of the photos is almost HD and the detail we see of the UFO recorded by a NASA satellite orbiting are incredible. The most important question here is not what they are…space stations or ships, but is the species that built them still on board those ships?

After the photos were removed, Waring issued a news alert claiming:

I have just been made aware by one of our readers that the UFO Photo that were almost in HD in quality have been deleted. I have tried the links in 4 different web browser but to no luck. The links are gone which means only the photos and videos we posted are the only evidence they ever existed. Please download and copy the video and photos you a personal file of yours and share with others.

As the photos and video make clear, there is unmistakable evidence of UFOs of an artificial design that have been photographed by NASA’s earth orbiting spacecraft. The UFO does not correspond to any known terrestrial spacecraft and appears to be alien in design. Nothing is known of the occupants, but Clark McClelland a former NASA employee who completed training as a Spacecraft Operator may have the answer.

During a 34 year career working as a NASA contractor/employee, McClelland was responsible for ensuring the safety of numerous NASA missions including Mercury spaceflights, Apollo missions, the International Space Station and the Space Shuttle. In a statement released on his website on July 29, 2008, McClelland revealed that he witnessed an eight to nine foot tall extraterrestrial in association with a Space Shuttle mission he was monitoring from the Kennedy Space Center. He wrote:

I, Clark C. McClelland, former ScO [Spacecraft Operator], Space Shuttle Fleet, personally observed an 8 to 9 foot tall ET on his 27 inch video monitors while on duty in the Kennedy Space Center, Launch Control Center (LCC). The ET was standing upright in the Space Shuttle Payload Bay having a discussion with TWO tethered US NASA Astronauts! I also observed on my monitors, the spacecraft of the ET as it was in a stabilized, safe orbit to the rear of the Space Shuttle main engine pods. I observed this incident for about one minute and seven seconds. Plenty of time to memorize all that I was observing. IT WAS AN ET and Alien Star Ship!

Furthermore, McClelland wrote that he was not the only NASA official who witnessed the incident: "A friend of mine later contacted me and said that this person had also observed an 8 to 9 foot tall ET INSIDE the SPACE SHUTTLE CREW COMPARTMENT! Yes, inside OUR Shuttle! BOTH missions were DoD (Pentagon) TOP SECRET (TS) encounters!'

Could the UFO photos that were deleted from the NASA Johnson Center website been the same extraterrestrial vehicle seen by McClelland? If so, then we may have our answer as to who are its occupants, and why someone at NASA decided to finally pull the photos from their website. The fact that the photos were left on NASA`s website for over a year and a half does suggest that there are those working within NASA that want the public to learn the truth about what NASA is seeing and doing in outer space. On the other hand, the fact that the photos were pulled does confirm that NASA is actively suppressing information about UFOs caught on film from many of its space missions.

UPDATE: Thanks to alert readers, both the high and low resolution photos of the UFOs depicted in the original series that were posted in the Scott Waring May 2011 article are still available online. It now becomes clear that NASA JSC moved their digital images to different locations. Here are the links to the high res versions (simply replace "highres" with "lowres" in the URL to get the low resol versons):