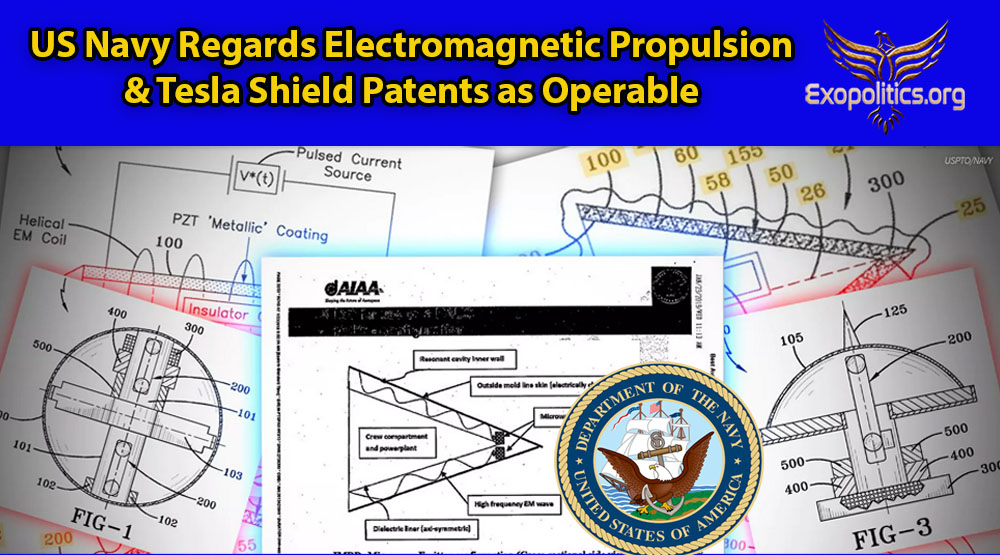 The US Navy has for the second time in a year intervened to support a patent application for an exotic propulsion system technology lodged by one of its employees, Dr. Salvator Pais, which had been rejected by the US Patent and Trademark Office. The Drive’s Brett Tingley comprehensively examines many details of Dr. Pais’ proposed invention, and why the Navy has intervened to support two of his applications.

The first time the Navy intervened concerned Dr. Pais’ patent application for a “Hybrid Aerospace-Underwater Craft” (HUAC), which would generate a quantum vacuum (electromagnetic bubble) around the craft enabling it to move through air and water at tremendous velocities. Here’s how Tingley summarized the HUAC’s capabilities:

In the Navy’s patent application for the HUAC, it’s claimed that the radical abilities of propulsion and maneuverability are made possible thanks to an incredibly powerful electromagnetic field that essentially creates a quantum vacuum around itself that allows it to ignore aerodynamic or hydrodynamic forces and remove its own inertial mass from the equation. Thus, the ability to generate such high-frequency electromagnetic waves is key to the alleged abilities of this theoretical hybrid craft that can soar near effortlessly through air and water at incredible speeds with little to no resistance or inertia.

The HUAC application was rejected on November 28, 2017 until the Navy’s Chief Technical Officer of the Naval Aviation Enterprise, James Sheehy, intervened on behalf of Dr. Pais, which I discussed in a previous article. The patent was eventually granted a year later on 12/4/2018.

However, another of Pais revolutionary patent applications, for a “Piezoelectricity-induced Room Temperature Superconductor” was also initially rejected by the patent examiner as explained by Tingley:

Nevertheless, Pais’ room temperature superconductor patent was rejected under 35 U.S.C. 101 because the examiner determined “the disclosed invention is inoperative and therefore lacks utility” and that “no assertions of room-temperature superconductivity have currently been recognized or verified by the scientific community.”.  That code states that patents will be granted only for “any new and useful process, machine, manufacture, or composition of matter, or any new and useful improvement thereof.”

According to the Manual of Patent Examining Procedure (MPEP) code 2164.07, patents are rejected on these grounds in cases “when the examiner concludes that an application claims an invention that is non-useful, inoperative, or contradicts known scientific principles.”

Once again, Dr. Sheehy intervened and on 11/27/2018 wrote a letter to the patent examiner where he stated:

I am familiar with the above referenced patent application (and related amendment), as well as the development, usage and properties of the piezoelectricity-induced room temperature superconductor. That as a result of my education and career, I am regarded as a subject matter expert and can be considered “a person of ordinary skill in the art” in the subject matter of the above patent application. A slide from Pais’ 2019 presentation “Room Temperature Superconducting System for use on a Hybrid Aerospace-Undersea Craft.” Source: Brett Tingley

Sheehy’s reference to the patent application as “operable and enabled” is highly significant, as observed by Tingley:

At the heart of these questions is the term “operable.” In most patent applications, applicants must assert proof of a patent’s or invention’s “enablement,” or the extent to which a patent is described in such a way that any person who is familiar with similar technologies or techniques would be able to understand it, and theoretically reproduce it.

In short, Pais and his employer are claiming his inventions actually work. In addition to Sheehy’s letter of support, a letter was also written on behalf of Pais by his patent attorney Mark Glut who emphasized the room temperature superconductor invention was both “operable and enabled”.

On June 6, 2019, Pais and Glut had a telephone interview with the rejecting Patent Examiner, Paul Wartalowicz. Tingley discovered through Freedom of Information Act requests that the appeal to overturn the latest rejection is ongoing.

In addition to the HUAC discussed earlier, another successful patent is the “The High Energy Electromagnetic Field Generator (HEEMFG)” which is essentially an electromagnetic forcefield. The patent’s significance was explained by Tingley:

In the patent for the HEEMFG, the technology is described as being able to create what is essentially a force field straight out of science fiction, one that could generate “an impenetrable defensive shield to sea and land as well as space-based military and civilian assets, protecting these assets from such threats as Anti-Ship Ballistic Missiles, Radar Evading Cruise Missiles, Top Attack for Main Battle Tanks (land and sea-based systems), as well as counteracting the effects of solar-induced Coronal Mass Ejections or defending critical military satellites in an ASAT [anti-satellite] role (space based system).

Scalar Waves can be warped into a dome around objects, such as cities or houses (publishing companies included). Such a Scalar Wave force field is generally known as a Tesla Shield, and it would be analogous to the “shields” referred to in the popular “Star Trek” series. Tesla Shields have a definite defensive application, and could not in any way be used for offensive purposes (although a platoon of soldiers charging into a Tesla Shield would be instantly disintegrated). The only defense from a blast of a Scalar Wave Howitzer would be a Tesla Shield.

In sum, there are three patents that have been successfully awarded so far to Pais where the Secretary of the Navy is the assignee. In chronological order, these are the HEEMFG shield whose full title is the “Electromagnetic Field Generator and method to generate an Electromagnetic Field” (granted 11/20/2018. a “Craft using an inertial mass reduction device” (granted 12/4/2018), and the “High Frequency Gravitational Wave Generator”(granted 06/18/2019).

To date, the patents granted to Pais have met with considerable scientific skepticism. Tingley interviewed Dr. Mark Gubrud, a physicist at the University of North Carolina, who said the following about the room temperature superconductor patent application:

Pais’s patents flow as an intimidating river of mumbo-jumbo that most trained physicists would recognize as nonsense, although many might simply disengage in confusion, and there are always some who might even be credulous. Of what, however, is hard to say, as it is not really clear what Pais is even claiming, apart from the room-temperature superconductor which, if it were true, would be huge news.

Pais deploys fairly sophisticated babble to make this sound plausible to those who know what real physics sounds like, but don’t understand much of it. Which is likely to include most patent examiners, journalists, and Pais’s own enablers in the Navy.

In bringing his article to a close, Tingley reached the following conclusion:

If the Navy has indeed managed to develop operable room temperature superconductors and electromagnetic force fields, these technologies would revolutionize warfare in ways not seen in centuries, or maybe even ever, not to mention leading to paradigm changes in civilian technology. Yet the largest question remains: if the Navy indeed possesses these technologies, or even thinks they are obtainable in the near term, why make the patents public?

Tingley ponders a number of possibilities including Pais’ patent applications being part of a sophisticated Navy disinformation campaign to throw China and other US military competitors off the track. Among these possibilities, is one that is close to the truth based on my research into US Navy and Air Force Secret Space Programs which have been documented in two books respectively available here and here.

It’s also at least worth considering that some breakthroughs in highly exotic propulsion might have been made and that the Navy is willing to invest big bucks into seeing them progress further. Maybe those advances happened many years ago and only now is the Pentagon willing to slowly disclose them.

This is precisely what I believe is happening with Pais’ patent applications. The US Navy is letting the world know about technologies that have been secretly researched and developed decades ago, and put into operation in classified space programs.

This is the reason why Pais, Sheehy and Glut all assert that the room temperature superconductor (along with Pais’ other inventions) is operable and enabled.  We are being told the Navy has already developed these technologies in secret space programs, and it’s time for conventional scientists to wake up to the truth and for commercial companies to start developing these technologies for the civilian aerospace industry.