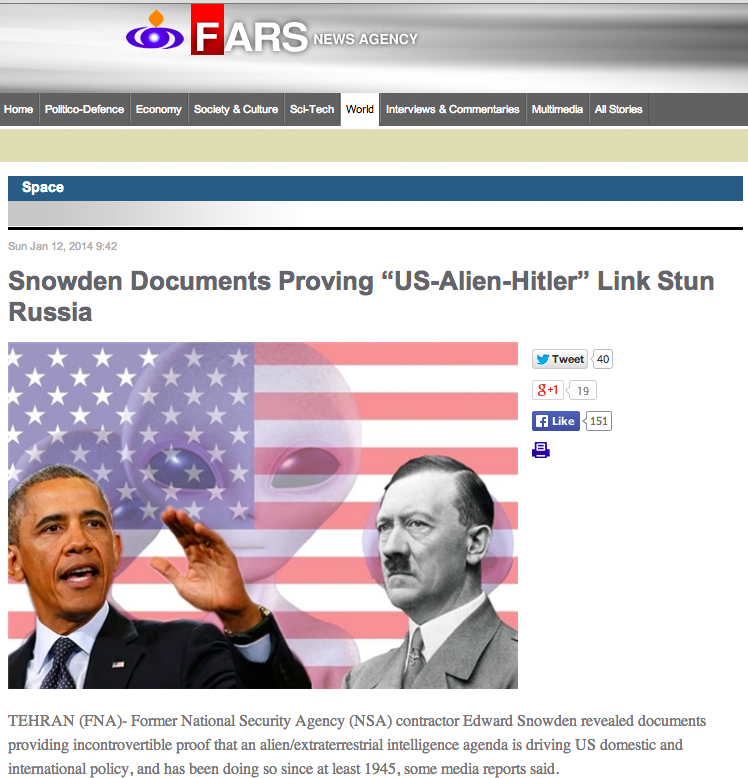 On Monday, the Washington Post released a most unusual story with the headline: “Iranian news agency says the U.S. is secretly run by Nazi space aliens.” Though the author, Max Fisher along with the Washington Post Foreign Staff, qualified the headline with the word, “Really,” it was clear that this was breaking new ground for the Post. The Washington Post’s Foreign Staff were giving a fresh perspective to the word “Foreign” by seriously examining claims by the Iranian media that the U.S. was being run by space aliens. Normally, such claims are found in conspiracy web sites and the alternative media. Now a bastion of the Fourth Estate was examining such claims with gusto. Yes, Fars News Agency, Iran’s semi-official news outlet, was indeed

claiming that the U.S. was run by space aliens, and this merited a response by no less than the Washington Post. The floodgates were now opened. The U.S. and other world media dutifully followed the Post’s lead and began running their own stories. Forbes, Jerusalem Post, UPI, Huffington Post, The Blaze and other news sources were now covering the Iranians’ stunning claim. Was it all Iranian propaganda or is there truth to the claim that a group of space aliens are secretly running the world’s last remaining superpower?

To begin with let’s turn to the original story by the Fars news agency that appeared on Sunday with the title: “Snowden Documents Proving “US-Alien-Hitler” Link Stun Russia” Fars began the story as follows:

A stunning Federal Security Services (FSB) report on the nearly two million highly classified top-secret documents obtained from the United States Department of Defense (DOD) run National Security Agency-Central Security Service (NSA/CSS) by the American ex-patriot Edward Snowden states that this information is providing “incontrovertible proof” that an “alien/extraterrestrial intelligence agenda” is driving US domestic and international policy, and has been doing so since at least 1945.

website, Whatdoesitmean.com. Faal has a notorious reputation for sprinkling patent falsehoods with genuine information and is viewed suspiciously by many conspiracy

theorists. Nevertheless, Fars went on to reference an interview given by Former Canadian Defense Minister, Paul Hellyer to Russia Today as confirmation for its story. In the interview, Hellyer cites his own research and experiences supporting his claim that the world has been visited by extraterrestrials for thousands of years, and that U.S. leaders began being visited by aliens shortly after the Second World War.

Hellyer cited Charles Hall, a former US Air Force airman, who claims to have personally witnessed high level cooperation between a race of extraterrestrials he called the “Tall Whites,” and very senior Pentagon officials at Nellis Air Force base in the early 1960s. Hall has written four books about his experiences after he first went public in 2004. Fars gave a new twist to Hellyer’s and Hall’s claims by claiming that the Tall White extraterrestrials were behind the stunning technological rise of Nazi Germany. The Tall Whites therefore qualified as Nazi space aliens, and with the collapse of Nazi Germany, then began cooperating with the U.S. Over the decades of cooperation since, the Tall Whites had gradually taken over key elements of the U.S. national security establishment. According to Fars, all this was the final conclusion reached in the top secret study conducted by the Russian state security organization, the FSB (successor to the KGB), after researching Edward Snowden’s leaked NSA documents.

For those such as this writer, the information first released by Hall in 2004 is not new. Many of Hall’s claims along with supporting evidence was covered in my 2009 book, Exposing U.S. Government Policies on Extraterrestrial Life. What is new, however, is that a former Canadian Defense minister, has publicly endorsed Hall’s claims, and now major news media have begun seriously covering Hellyer’s vocal support for the veracity of Hall’s claims.

According to Fisher and the Washington Post Foreign Staff:

Yes, this story is highly entertaining, as are many of the bizarre conspiracy theories proposed by official or semi-official news agencies in authoritarian states. But there’s also a more serious undercurrent here. A worldview that sees the U.S. as an evil hegemonic force so irrationally driven toward global domination that it must be run by space aliens is not a worldview that is predisposed toward negotiation or accommodation.

Fisher’s conclusion is that claims of Nazi space aliens running the US is propaganda by Iran’s hardline factions to rule out cooperation with the U.S. in current nuclear negotiations. On the other hand, by giving the claims of the Fars News Agency serious coverage, the Washington Post was doing more than simply reveal the intransigence of Iran’s hardline factions. It was giving serious news coverage to claims that have been on fringe conspiracy websites for years.

The US national security apparatus has been allegedly negotiating and colluding with space aliens for years according to multiple sources cited in Exposing US Government Policies on Extraterrestrial Life. If some of these sources are accurate, it is feasible that U.S. sovereignty has been seriously compromised. Now the Washington Post has made such controversial claims legitimate material for the Fourth Estate to examine in light of current nuclear negotiations between Iran and the world community. Whether propaganda, truth, or a mixture of both, the Washington Post’s examination of Fars News Agency claims of the U.S. being run by Nazi space aliens has sparked an international debate.