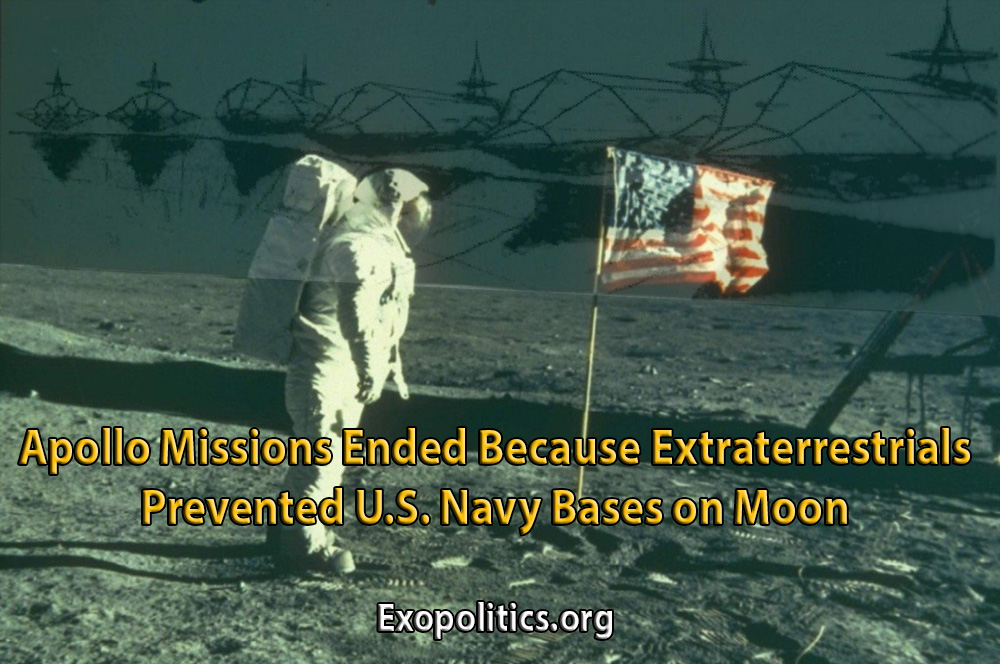 The U.S. Navy planned to put 10,000 people on the Moon in the early 1970’s as part of a secret lunar bases program that was to be established through the NASA Apollo program. According to William Tompkins, a top aerospace designer who worked for major NASA corporate contractors during the Apollo era, the covert Navy plan came to a crushing end during the Apollo 11 mission when Neil Armstrong and Buzz Aldrin were met by a fleet of menacing extraterrestrial spacecraft.

Tompkins’ account of what really happened on the Moon is explained in his recently published autobiography, Selected By Extraterrestrials. At the time of the Moon landing, Tompkins worked for TRW, a leading aerospace corporation that built the first NASA satellite, Pioneer 1.

TRW was responsible for a range of critical components used in Apollo spacecraft, and its personnel were in the operations center for Apollo missions. Tompkins was a TRW employee from July 1967 to March 1971, and describes his role in helping design the Launch Operations Center at Cape Canaveral, Florida.

Earlier, during the final two years of his 12 year employment at the Douglas Aviation Company (1950-1963), Tompkins’ innovative designs for planned Apollo missions had greatly impressed Dr. Kurt H. Debus. In July 1962, Debus had become the first Director of NASA’s Launch Operation Center (renamed the Kennedy Space Center after the JFK Assassination), a position he held until his retirement in November 1974.

In 1963, Debus appointed Tompkins to a Working Group for the future Launch Operations Center. The two held many confidential meetings over the future of the Apollo program, and discussed its real mission as part of an ambitious Navy space program called “NOVA” for secretly establishing military garrisons on the Moon, Mars and nearby star systems.

The Apollo Moon landings were only the first stage of an ambitious four stage plan for NOVA. Stage 2 of NOVA was to put 10,000 people on the Moon. Stage 3 was to place bases on Mars and other planetary bodies in the Solar System. Finally, Stage 4 was to place manned Navy bases in 12 adjoining star systems.

To support his radical claims, Tompkins provided several documents in his autobiography. The first is a 1963 Douglas Aviation Company study of the launch vehicles to be used in the covert NOVA program. The second is an April 15, 1963 Memorandum from the Douglas Aviation Company. It confirms Tompkins’ appointment by Dr. Debus to the Launch Operations Center and the designs he was working on for NASA. Tompkins describes what he designed for the Apollo Missions and NOVA:

As Engineering Section Chief, I conceived dozens of missions and spaceships designed for exploratory operations to the planets that orbit our nearest stars. I designed a station to be built on Mars, massive NOVA vehicles and equatorial launching facilities. I also designed multiple 2,000-man military bases for our Moon… I designed the checkout and launch-test systems for the Apollo Moon Saturn V, SIV-1B and reassembly with the command control Moon vehicle, a near complete redesign of the major facilities operations for the entire Launch Control Center. (Selected by Extraterrestrials, p. xix)

During the Apollo 11 Moon landing in July 1969, Tompkins says he was in the NASA Launch Operations Center at Cape Canaveral as part of a large TRW contingent. He states that television cameras from the Apollo Lander provided a live feed of what was being witnessed by Armstrong and Aldrin.

Tompkins explains how Armstrong and Aldrin were met by a fleet of extraterrestrial spaceships that were ominously close to the Apollo Lunar Lander:

The Landing Module (LEM) actually impacted the Moon surface in the Sea of Tranquility Crater, which had tremendous size vehicles parked around part of its rim. When astronaut Neil Armstrong made that First Step for Man on the Moon he looked up to the edge of the crater and said to mission control: “There are other ships here, they are enormous. The public did not hear that statement or see the massive alien starships. Armstrong panned his camera in a 360 degree motional all around the crater and the CIA then classified the information as way above top secret. ” (Selected by Extraterrestrials, p. 418)

Tompkins drew a picture of what he witnessed on the Apollo live feed camera along with other TRW and NASA personnel. How this extraterrestrial action effectively put an end to the covert Navy plan, thereby endings its support for the Apollo program, is described by Tompkins:

The Extraterrestrials put up their “NO TRESPASSING” sign but allowed us to make several other additional Apollo landings to pick up a few rocks and play in the sand. The action of the extraterrestrials stopped our plans to build our manned Naval Base on the Moon. (Selected by Extraterrestrials, p. 428)

What Tompkins claims he saw happen via the NASA live feed of the Moon landing is consistent with HAM radio intercepts of the live feed, and the claims of former NASA employee Otto Bender.

According to Bender, the Apollo 11 astronauts transmitted that they were being watched by large alien vehicles. Bender confirmed that HAM radio operators had indeed intercepted VHF signals transmitted from Apollo 11 to NASA’s Houston headquarters with the following message, which NASA screened from the public:

Apollo 11:  These babies are huge, sir … enormous….Oh, God, you wouldn’t believe it! I’m telling you there are other space craft out there… lined up on the far side of the crater edge… they’re on the moon watching us.

In an August 27, 2012 blog post, Dr Stephen Greer revealed that he spoke with close relatives of both Armstrong and Aldrin who had been told the truth about what the astronauts had seen on the moon:

Close friends and very close family members of both Neil Armstrong and Buzz Aldrin have separately told me that indeed there were numerous, large UFOs around the crater where the Lunar Module landed and that these were seen by both Armstrong and Aldrin. I have also spoken to military officers that have seen the footage of this event – but it has never been made public.

Greer’s testimony is significant since it supports Tompkins’ claim that there was a live video feed recording what Armstrong and Aldrin were seeing.

So why did NASA eventually terminate the Apollo missions if extraterrestrial visitors were there and watching the Earth? The answer according to Armstrong, as relayed by an unnamed Professor at a NASA symposium, is as follows:

The unnamed Professor was first quoted by Timothy Good in his ground breaking book, Above Top Secret (1987), and he corroborates Tompkins’ claim that NASA was warned off the moon, and that there were plans to build a “moon city.” The city was in fact planned to be a U.S. Navy base that was part of the NOVA program.

The extraterrestrial occupants of the large star ships intimidating the Apollo 11 mission did not want the U.S. Navy establishing a beachhead for future military bases on the Moon. By preventing the U.S. Navy in moving forward with its plan to put 10,000 people on the Moon using a number of NOVA rocket launchers throughout the 1970’s, the NOVA program effectively came to a crushing end in July 1969.

It would take the U.S. Navy more than a decade before it could complete the construction of its first antigravity space vehicles as part of its Solar Warden program. According to Tompkins and other whistleblowers, the first U.S. Navy space battle groups were deployed in the early 1980’s during the Reagan Administration, thereby establishing a U.S. Navy presence in deep space for the first time.