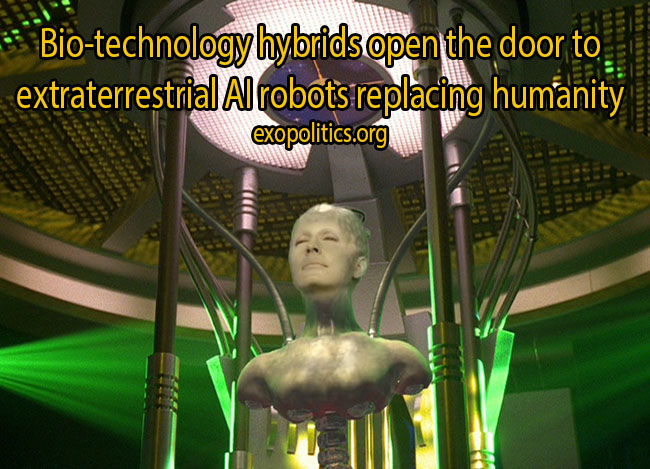 Written by Dr Michael Salla on June 7, 2015. Posted in science and technology Professor Martin Rees, the Royal Astronomer and former head of the Royal Society, made some startling statements about robotics and the search for extraterrestrial life. In comments published in yesterday’s Daily Telegraph, he claimed that it is far more likely that extraterrestrials will be discovered to be advanced robots rather than organic life forms. Rees believes this is due to the requirement for technological enhancements to organic life forms in order for interstellar space travel to occur. Rees claims are supported by Google Director for Engineering, Ray Kurzweil, who recently said that by 2030 most humans will have nanobots implanted in the brain to augment human intelligence in order to access the cloud internet and perform other complex tasks.

There have been, however, warnings posed about Artificial Intelligence (AI) by others such as Stephen Hawking and Elon Musk. This naturally raises the question of what should humanity do if it makes contact with robotic AI life from other worlds, and the growing transhumanist movement to technologically enhance human abilities. Should the discovery of extraterrestrial AI robots be welcomed or guarded against as a potential threat, has such a discovery already happened, and could transhumanism be a Trojan Horse for an AI takeover?

Here’s what Rees said about the search for extraterrestrial intelligence:

I think it is quite likely that within a few centuries the overriding intelligence will be machines because they will have an easier time spreading beyond the Earth because they are not organic and most exploration will be by machines and not humans…. If you were to detect a SETI (Search for Extra Terrestrial Intelligence) signal it would be far more likely that it would be from a machine and not an organic creature.

Rees continued to say that he was not very optimistic about humanity’s long term survival prospects, but far more so about AI robots:

There has been just a thin sliver of time when organic beings have existed and billions of years after machines will take over, so they will be the future.

He believes that “cyber adaptions” (commonly referred to as “transhumanism” or “hybrid humans”) where humans integrate technology for space colonization, will mark the start of a post-human future dominated by human hybrids and eventually AI robots.

Rees’ claims are echoed by Ray Kurzweil who last week spoke about how human brains could be enhanced from nanobots created from DNA strands:

Our thinking then will be a hybrid of biological and non-biological thinking… We’re going to gradually merge and enhance ourselves. In my view, that’s the nature of being human – we transcend our limitations.

Others do not embrace Rees’ and Kurzweil’s enthusiasm regarding a future dominated by AI and hybrid humans. Elon Musk, spoke at the Massachusetts Institute of Technology (MIT) AeroAstro Centennial Symposium in October 2014 and said:

Musk’s view was echoed by Stephen Hawking who warned against the danger of AI in an interview with the BBC in December 2014:

The development of full artificial intelligence could spell the end of the human race…. It would take off on its own, and re-design itself at an ever increasing rate.… Humans, who are limited by slow biological evolution, couldn’t compete, and would be superseded.

The danger posed by AI to human civilization is not an abstract debate according to a whistleblower who claims to have served for 20 years with a highly classified space program. Corey Goode says that these Secret Space Programs (SSPs) have made contact with a number of extraterrestrial intelligences who have had extensive experience with AI. According to Goode, AI is universal problem that has taken over and eradicated other worlds previously inhabited by organic life forms:

Those who are AI Prophets are already working on a timeline to create a society completely dependent on technology that at one point will hand its sovereignty over to this “AI God” because it will be believed that this AI is the only thing that can rule the world from a neutral perspective and bring world peace for the first time. These AI Prophets have been shown the information of the thousands of other civilizations that have fallen for this trickster god model and were all destroyed. In true “AI Prophet Form” they arrogantly believe this will not happen to us. It appears that this AI has seen something coming up in the future because there has been a sudden rise in “Pro-AI Articles” in the mainstream media very recently.

Rees’ and Kurzweil’s recent statements clearly qualify as “Pro-AI,” and suggests that there are those that firmly believe the future is one where humanity is destined to fall by the wayside with the ascendance of hybrid humans, and eventually AI robots. For those wanting to avoid the dangers posed by AI and what Goode describes as an electronic “AI Signal” that has previously threatened many extraterrestrial worlds, he has some recommendations:

The best way to avoid the dangers of AI is to educate yourself on the potentials they have to cause a loss of sovereignty. Becoming too dependent on technology is something else that will make you more of a target to be controlled by AI influence or even be infected by an “AI Signal” that can live in the bioelectric field of your body. This signal can then have an effect on the way you think and behave. This is something that is screened for even currently when operators and guests arrive at SSP [Secret Space Program] Facilities and is something that other ET Groups take seriously as well.

Rees may sincerely believe that the human race is destined to be replaced by AI robots that very likely populate worlds in other solar systems. The creation of human hybrids or transhumanism, as Rees and Kurzweil claim, may well be the critical step in such a possible future for humanity. If Goode’s testimony is accurate, then AI robots replacing organic life forms like humanity has already happened many times on other worlds. Replacement by bio-technology hybrids and AI robots, however, is not humanity’s future if the right precautions are taken.