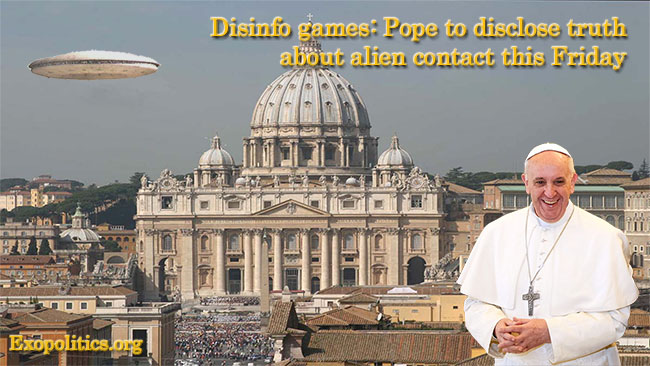 Written by Dr Michael Salla on June 2, 2015. Posted in Exotheology The headline says it all, “Pope To Reveal Truth About Alien Contact THIS WEEK!” Monday’s story by Yournewswire was quickly picked up by other alternative media such as Neonnettle, Ghostdiaries and other sources. The stories cited a lecture given on Sunday by Danny Sheehan, a former General Counsel for the Jesuit Order, predicting Pope Francis will on Friday, June 5, denounce the global financial system as a prelude to “full alien disclosure.” Problem with the report is that it is only half right, according to Sheehan.

Sheehan is an authority on the Jesuit Order, which he served as General Counsel for ten years beginning in 1975 at its National Office of Social Ministry in Washington, D.C. In 1977, he reported that he saw classified evidence of extraterrestrial life being held at the Library of Congress while serving as an expert to a U.S. Library of Congress Congressional Research Office Project on extraterrestrial intelligence initiated by President Jimmy Carter.

Sheehan gave several lectures and panel discussions at the Contact in the Desert conference. His lecture on Sunday was titled: “The discovery of more & more “earth-like” planets: why this may well be “the back door” through which the scientific community will “allow in” the existence of “other intelligent life in the universe.”

In it he focused on statements by several Vatican astronomers beginning in 2009 concerning the inevitability of discovering extraterrestrial life through advance astronomical observations of exoplanets. He emphasized that the Vatican astronomers have ever since been pointing out the theological and societal consequences of such a discovery in order to prepare Catholics for the inevitable.

Here is what Yournewswire reported about Sheehan’s Sunday talk:

At a conference today, Sheehan reveals that the Pope will be denouncing the capitalist system in order to prepare for full alien disclosure. In his announcement, he is predicted to expose the truth about the existence of other intelligent life-forms, some of which have been in contact with earthlings for many years. The Pope, it is said, is keen for the revelation to be made in a way that will avoid mass chaos: how he’ll do that is, for now, anyone’s guess.

From his prominent support for Dr Stephen Greer’s Disclosure Project, it is clear that Sheehan believes that a cover-up of extraterrestrial life has been underway for decades. The title of his Sunday lecture also reveals his belief that recent statements by Vatican astronomers suggest that the Pope Francis is also committed to the idea that it is inevitable that extraterrestrial life will be discovered through astronomical observations of exoplanets. Such a scientific discovery, for Sheehan, may well be a back door to disclosure of the decades-long extraterrestrial cover up.

I contacted Sheehan on Tuesday morning for confirmation of his remarks. He explained that the Yournewswire report was mixing up different talks and topics. Indeed, Sheehan was making a prediction for June 5. It was that Pope Francis would release an encyclical about “global climate change” and how “transnational corporate capitalism” is a major factor. The Pope’s predicted encyclical will be critiquing global capitalism. Sheehan also confirmed that he had discussed Vatican astronomers who had raised the societal and theological implications of extraterrestrial life.

Sheehan pointed, however, that he was not predicting the Pope making any kind of statement about the discovery or disclosure of extraterrestrial life on Friday. Yournewswire had got it wrong. Was it just a mistake by an overzealous reporter or part of a disinformation campaign against future disclosures concerning UFOs or extraterrestrial life?

Among the leaked National Security Agency (NSA) documents leaked by Edward Snowden, the first to explicitly involve the UFO issue was released on Feb 24, 2014. The 50 page document is a powerpoint presentation titled “The Art of Deception: Training for a New Generation of Online Covert Operations,” and was authored by the British equivalent of the NSA, the Government Communications Headquarters (GCHQ). The leaked document details how the NSA is working with its “Five Eyes” partners in Britain, Canada, Australia and New Zealand to train its operatives in online covert operations. An article by Glenn Greenwald exposes how the NSA and its Five Eyes intelligence partners encourage a range of psychological warfare tools to discredit any targets discussing sensitive national security information. In the “Art of Deception” document three of the 50 slides show images of UFOs – one of which dates from 1950. The leaked document reveals a clear connection between online covert operations by the GCHQ and its intelligence partners on the UFO issue. It is smoking gun evidence that the international intelligence community is training its covert operatives to deceive the public on a range of sensitive national security issues including UFOs.

It’s possible that Sheehan was simply misquoted by a reporter that mixed up his statements. On the other hand, the story may be part of a disinformation campaign designed to achieve the very opposite of extraterrestrial/UFO disclosure. On June 5, or thereabouts, it’s very possible that Pope Francis will issue an encyclical about global warming and transnational corporate capitalism. Don’t hold your breath though for the Pope to also declare extraterrestrials exist or that governments have been covering this up. Not yet anyway.

[Update 6/5/15 – The National Catholic Report says that the Pope’s Encyclical on the Global Environment will be released on June 16. An update by the Vatican News Service, says the Encyclical will be now released on Thursday, June 18]