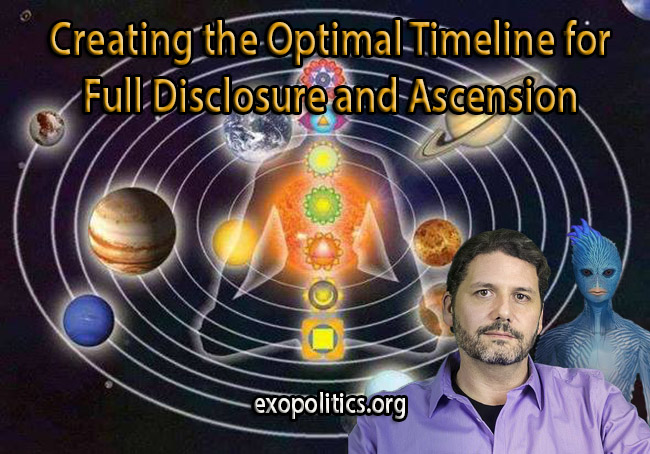 Whistleblower, Corey Goode, today released the second part of an extensive report about what he claims are a series of recent meetings he has had with representatives from different extraterrestrial groups, an “Inner Earth” civilization and a secret space program alliance. He provides additional information to what was presented in part one about the possibility of massive solar activity, which global elites (aka Syndicates/Cabal) are convinced will have devastating effects on the planet.

Goode’s claims, which are quite rich in detail and scope, can at times be very disturbing. Those new to his information may be tempted to dismiss it as sheer fantasy. However, after more than a year of closely investigating Goode’s claims, much of which was presented in the book, Insiders Reveal Secret Space Programs and Extraterrestrial Alliances, I have yet to find anything that makes me suspect that he is being untruthful in any way.

Goode’s revelations provide a framework for understanding what may well be the most the most important diplomatic meetings and negotiations currently underway that directly effect all of humanity.

Due to the amount of material in part two of his report, I have decided to present my analysis of his information in three separate articles. This is due to the importance of the issues he discusses, and the need to comprehensively evaluate these before moving on to his description of other meetings and events he attended or witnessed.

Therefore, in this article, I analyze Goode’s discussion of predicted solar activity, the likelihood this will impact humanity, and what can be done to personally prepare for it.

In his report, Goode describes being taken by a blue sphere on July 10 to a meeting with representatives of the Sphere Being Alliance – a group of very highly evolved sixth to ninth density extraterrestrials.  He described his communication with an eight foot tall “Blue Avian” called Raw Teir-Eir.

In our current meeting, I was standing before Tear-Eir and he began to communicate. My attention was directed back to the cosmic scene that was unfolding all around us. I was watching the spheres slowly moving in the direction of Venus and Earth on their way to the outer solar system. They were looking more and more as if they were fading away.

This is consistent with an earlier report by Goode that planet sized spheres, strategically placed throughout our solar system to buffer cosmic energies, had almost completed their mission.

I then saw the energy waves hitting the Earth’s magnetic field and wrapping around it. The energy was directed into the Earth’s core via the north and south poles and then emerged outward from the Earth’s surface.

Goode has previously described efforts by many global elites, who he describes as criminal syndicates, to escape to safe underground locations in Antarctica and South America in early 2016. Based on what he had just witnessed he believed this would be unsuccessful:

I was thinking to myself that it would be impossible to hide underground from this energetic wave, no matter how deep below the surface or shielded by advanced technology you were.

Apparently many of the global elite thought the same since earlier in 2016 many of them tried to flee their underground facilities. This led to a battle between opposing space programs over Antarctica when some elites attempted to escape in tear drop shaped ships belonging to the space program described as the Dark Fleet, which emerged out of a Nazi Germany and Draconian extraterrestrial alliance from the World War II era. Goode next relayed how Raw Teir-Eir stated that the effect of the cosmological events currently underway would impact humanity:

Among the effects Goode was told about, was that the energy waves were impacting a “mind control” or “behavioral modification” grid that has been used to control humanity for thousands of years. The result was that it was becoming harder to influence humanity to take desired collective actions:

This also was interfering with the “behavioral modification” grid that has influenced the thoughts and behavior of people on this planet for many thousands of years. As a result, this grid had to be turned up to its maximum power level to have the desired effects on the population, which I was told would also increase its side effects.

The energetic changes and increased power to the mind control grid were causing people to begin to behave erratically, and become apathetic and ineffective.

It is well known that World Wars have been sparked in the past by xenophobic nationalism, religious fanaticism or other forms of extreme collective human behavior. While such behavior appears to be happening today in many areas of the planet such as the Middle East, Goode is telling us that the side-effects of the mind control grid being impacted by cosmic energy waves, is mitigating what the global elite have intended. This suggests that elite plans for a World War III will not happen.

Goode was next told about a small time period humanity has to co-create the optimal timeline:

What Goode was told next is going to be very disturbing for many concerned about a possible “Ascension Event” that impacts all humanity:

Among the topics we discussed was the shockingly low percentage of humanity that would be ready for Ascension if it occurred at the current time. It would only be approximately 0.042 percent – less than one out of every 2300 people. It was apparent that time was short for all of us to process our karma and increase our own service-to-others polarity.

Indeed, it is shocking to hear what percentage of humanity is ready for what the Sphere Being Alliance views as a defining event for our planet and humanity in general.

Goode elaborated further on what was needed to create the optimal time line and better prepare for an Ascension Event:

It is worth spending time understanding how one can increase the “service-to-other” polarity to both create the optimal temporal reality and be ready for the Ascension Event, according to the literature recommended to Goode by the Secret Space Program Alliance.

While the concept of a service-to-other polarity comes from the “Law of One” or “Ra” material, this was not the only literature recommended to Goode for understanding current cosmological events and the evolution of consciousness. In August 2015, in his response to a question, Goode said:

I knew that some groups were ordered to read the “RA” and “SETH” Data while in the programs at the same time I knew many groups were working to discredit both works. The Seth Material (1963-1984) preceded the Law of One material (1981-1984) by almost two decades and is widely regarded as among the finest and most influential channeled material ever to be released.

While the Law of One/Ra focused on presenting a comprehensive conceptual framework for understanding how consciousness evolves, Seth in contrast focused on concrete steps an individual could take to change their personal and collective reality, by altering their conscious belief system.

The approach taken by the Seth material is therefore very helpful in understanding how one can create a service-to-other polarity recommended in the Law of One material, which Goode has been told is essential for humanity at this point in our personal and collective evolution.

When you are fulfilling the joyful nature of your being, you are helping yourself and you are helping others. When you help others because you think you must, but it goes against the grain, then they know it, and you inflict upon them the obligation that you have no right to inflict…(Susan M. Watkins, Conversations with Seth, p. 179)

Seth provides clarity on how one can achieve a service-to-other polarity, and feel connected to the needs of others. It does not come from sacrificing one’s own joy or needs to make others happy, but by following one’s own life path:

When you follow your own nature, you automatically and naturally feel for the needs of others … When you are joyful and free, and when you are having fun, you automatically feel … your oneness with all other creatures of the universe, and you know your place in All That Is. (Susan M. Watkins, Conversations with Seth, p. 179)

While it is disturbing to learn that only 0.042 percent of humanity has attained the necessary service-to-other polarity necessary for a possible Ascension Event at this time, the Seth material clarifies the steps we individually need to take to prepare ourselves.

In short, we need to follow the advice of the famed mythologist Joseph Campbell, author of The Hero’s Journey:

Consequently, creating the optimal timeline for full disclosure and Ascension by becoming more service-to-other does not need to be a stressful and intimidating task, but means having the courage to have fun by following one’s true calling in life.