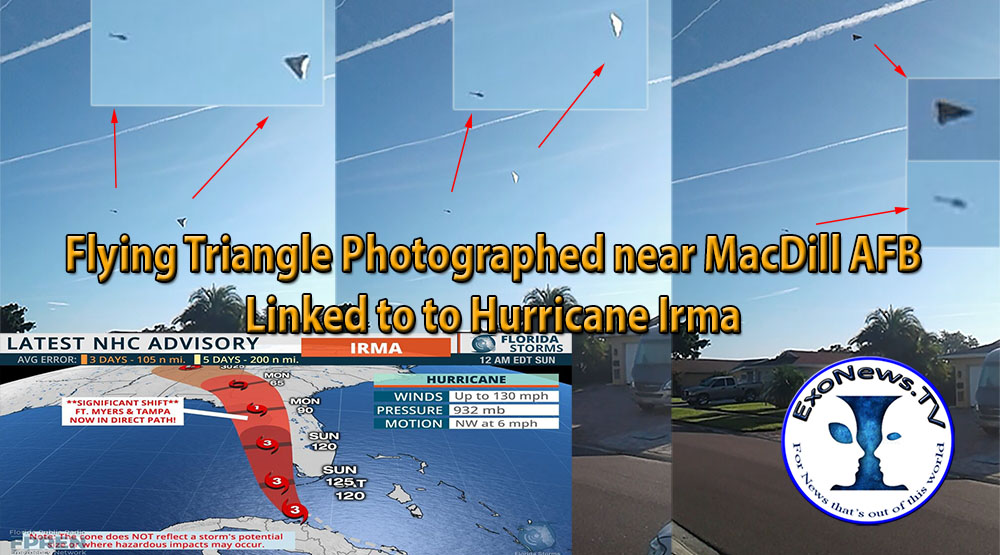 The first two segments of a four part audio interview series with JP, who has been releasing photos of flying triangles, flying rectangles, flying saucers and other antigravity craft witnessed in the vicinity of MacDill Air Force Base, Tampa, and Orlando, Florida, is now available on ExoNews TV.

JP is a contactee who has had contacts with human looking “Nordic” extraterrestrials since 2008. In addition to ongoing contact experiences with the Nordics, he has also had experiences with a U.S. Air Force run secret space program that has been taking him aboard flying triangles and rectangles.

What makes JP stand out among many contactee/insider claims is that he has taken stunning photos of the craft that he has been taken aboard, and/or belonging to the Nordics. In some cases, JP was encouraged by personnel associated with USAF Special Operations to take photos of their antigravity vehicles.

In Part 2 (released today) we learn from JP how he began releasing photos of flying triangles he witnessed near MacDill AFB, Tampa, Florida, in August 2017, after being prompted to do so from unknown covert personnel. Soon after Hurricane Irma appeared and reached Category 5 on the hurricane scale, and made a beeline for MacDill, which led to its first ever evacuation and closure.

According to JP’s sources, Irma was retaliation for the USAF Special Operations Command making its fleets of antigravity craft known to the general public.

In Part one (released on March 30) we learn about how JP’s contacts began during his early childhood, and resumed in 2008 where he encountered Nordics for the first time. He soon after began communicating his experiences with me and I have kept a record of his encounters and began writing a series of articles on them in September 2017 .

To learn more about JP and the photos he has taken of antigravity craft go to: http://exopolitics.org/jp-articles-photos-videos/

Feel free to share this article with original links.

[Special Note: JP recently lost his job after he began sharing his photos with more members of the general public, after repeated warnings of not to do so by personnel associated with the CIA. He has been pressured to join the U.S. military in order to resolve his financial problems, but has resisted since it would impact his ability to share his startling experiences with the public.

If you would like to support JP in his efforts to continue disseminating his photos and information, you can do so through a donation via the Exopolitics Institute. Please use the following Paypal link for your donation and mark it, “JP Donation” .]