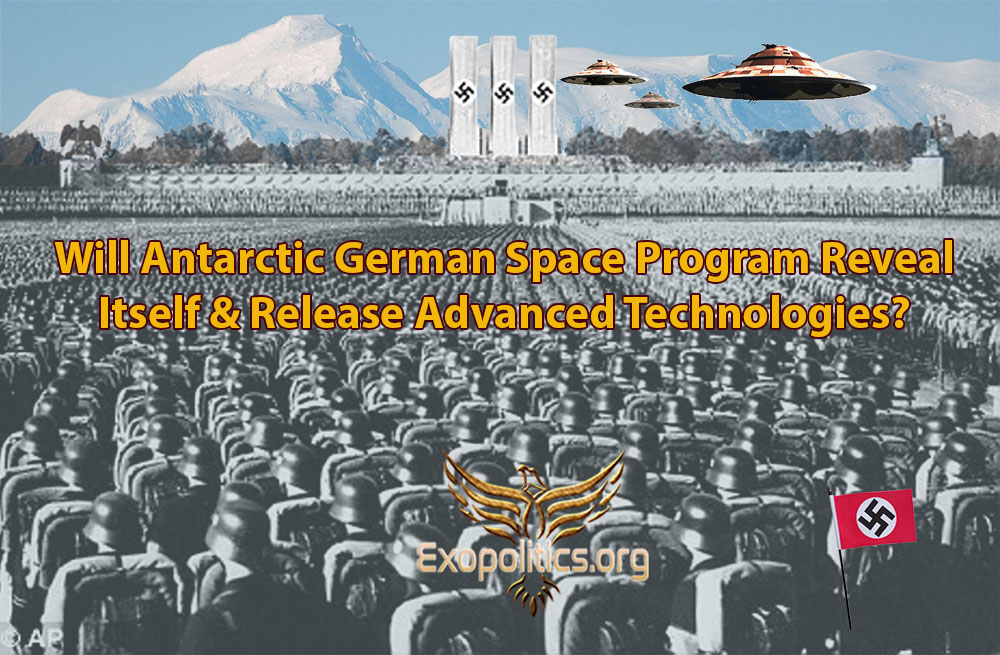 There has been much controversy over a February 5 blog post by former Forbes Magazine editor, Benjamin Fulford that a German Space Program based in Antarctica has secretly reached a deal with U.S. and global authorities, and is ready to reveal itself. Such a disclosure will lead to life changing antigravity and other suppressed technologies being released, according to Fulford.

Fulford does not name his sources or offer any direct evidence supporting his controversial claim, but recent visits to southern Argentina by U.S. Secretary of State, Rex Tillerson and Amazon founder Jeff Bezos, does offer important circumstantial support. Fulford’s claim therefore merits close examination in light of what Tillerson and Bezos were really doing in Argentina.

A major peace deal was reached last week in negotiations that took place literally under the light of the blue-blood super moon in a certain Asian country last week, according to sources who were present. As are result of this, the Nazi faction of the world military-industrial complex has agreed to align itself with the light side of the force. Thus in the near future, Nazi technology, notably anti-gravity and hypersonic (Mach 20+) air travel, will be made available to the “surface population,” of the planet, the sources say… We will have more details toward the end of this report.

Towards the end of his blog post, Fulford gives the promised additional details:

In any case, now that the Nazis have agreed to come out of hiding and rejoin the human family, there is simply no military power left that will support any more Khazarian genocidal projects. The Nazis are now run by a generation that is in their 30’s and who have no experience with or involvement in the horrors of World War II. For that reason, they have no reason to hide.

In any case, according to the source mentioned above, the Nazis have not really been hiding at all. In the real world, most Nazi leaders who were not arrested at the end of World War 2 did not go to Antarctica or even South America. Instead, they went to Spain, which was still run by a Fascist government after the war ended. Many stayed in Spain, but others moved on to Cuba and Nevada, among other places. The infamous Area 51 and other bases in Nevada are mainly bases for testing advanced Nazi aerospace technology, according to this source. This technology will now be shared with the general population, the source says.

The Nazi bases in Antarctica, this source says, are far smaller and less significant than many believe. He says disinformation about giant Nazi bases in Antarctica was deliberately put out by the Nazis in order to keep Nazi hunters off their trail. The reality is that they did find warm hollows under the ice created by volcanic hot springs, but that that the water was undrinkable.

In answer to a reader’s question about the intentions of the present German leadership in Antarctica, Fulford added:

The new generation of Nazi leaders renounces the genocidal plans of their fathers and grandfathers and wishes to share their wonderful technology with humanity. As such, we should welcome them, and hopefully their secret space program will not have to be secret any more.

There has been extensive eyewitness testimony given by insiders such as William Tompkins (a former US Navy operative and aerospace engineer), Clark McClelland (a former NASA employee), Corey Goode (former secret space program participant) about a fully functional German secret space program in Antarctica that covertly established agreements with the U.S. military industrial complex in the 1950’s.

Some of this eyewitness testimony was covered in Books One and Two of my Secret Space Program Series, and a more detailed examination along with supporting evidence is forthcoming in Book Three: Antarctica’s Hidden History: Corporate Foundations of Secret Space Programs (March 2018).

In short, there is much evidence that a German space program was secretly created in Antarctica, and that agreements reached with the U.S. Military Industrial Complex led to its expansion, and the establishment of what Jim Marrs and others refer to as the Fourth Reich.

This is where the Argentinian city of San Carlos de Bariloche, (aka Barilcoche)  becomes important. According to credible sources, Adolf Hitler escaped the war to establish his primary residence in Bariloche, which is located in Patagonia, the southern-most region of Argentina. World War II historians such as Harry Cooper and Dr. Jerome Corsi have cited extensive documents and eyewitness testimonies supporting such rumors. With the confluence of international finance and exiled Nazi leaders, Bariloche became the de facto capital of the Fourth Reich, and the place U.S. leaders would regularly visit to reach agreements with the Antarctic based German space program.

This is evidenced by visits to Bariloche by U.S. Presidents such as Dwight D. Eisenhower (February 28, 1960), William Clinton (October 18, 1997), and Barack Obama (March 24, 2016) all visited Bariloche ostensibly for economic development and/or environmental protection. The real reason may well have involved covert negotiations with leaders of the German SSP out of Antarctica. President Dwight Eisenhower arrives in Bariloche, Argentina where he signed a Joint Declaration for economic development and environmental protection.

This why the February 3 trip to Bariloche by Secretary Rex Tillerson becomes important. Was he there simply to discuss “ecological exchanges” as State Department Undersecretary Steve Goldstein stated to the press? Or was Tillerson there to conduct secret negotiations with a new generation of leaders from the German Antarctic Space Program, as Pentagon sources allegedly told Fulford?

What lends further plausibility to Fulford’s claim of secret negotiations is Amazon founder and world’s richest man, Jeff Bezos, simultaneous visit to Argentina. On February 3, an Argentinian newspaper released a story about Bezos unannounced visit to the Perito Moreno glacier in Patagonia to “save the earth”:

The American businessman Jeff Bezos, founder and director of Amazon, owner of the legendary newspaper The Washington Post and founder of Blue Origin, a company that aims to make suborbital and commercial orbital trips, is located in the Argentine Patagonia.

It’s worth emphasizing that Bariloche is the fourth largest city in the region of Patagonia, with a sufficiently large airport to accommodate their aircraft. Tillerson and Bezos could have very easily attended secret negotiations respectively representing the highest levels of U.S. government and industry.

Indeed, this is what Dr. Joseph Farrell, who was the first to report on the Tillerson and Bezos visits, contends is what happened:

Mr. Bezos’ comments seem to imply that the purpose of his Patagonian glacierology expedition is related to space matters… which, again, conjures that image of Mr. Obama in Bariloche with NASA folks in tow. (And let’s not forget the Chinese presence in the region, again for ostensible “space related” purposes.) So, yes, my high octane speculation is that Mr. Bezos’ visit to the region is related to Mr. Tillerson’s, and that the purpose is not glaciers or Fullbright scholarships or talks to nature preserves, though it should be noted that the “nature” angle figures as a covering story both for Mr. Tillerson and Mr. Bezos! That alone suggests to me coordination, and that the trips are, indeed, related somehow. It’s that other influence in the region that raises the questions: Nazis. Bariloche was, after all, home and headquarters, more or less, to Dr. Ronald Richter’s very strange postwar plasma experiments for Juan Peron. The so-called Nazi Estancia, the “Ranch,” a vast cordoned-off area of some 10,000 square miles, is in the region.

The important point here is that Mr. Bezos may have given a clue about the real nature of the ongoing interest of “big names” and “big money” in the region: space, and advanced technologies, and that the real purpose of these strange visits is related directly to these.

Lending further credence to such an observation is the role of the Chinese military in running a joint space program facility with the Argentinian government that came into operation in 2016 in the Patagonia region, around the time of President Obama’s Bariloche visit.

This brings us back to Fulford’s unnamed Pentagon sources that told him about negotiations taking place at an Asian country around the time of the January 31 Super Blue Blood full moon. These negotiations involving global elites (aka Deep State/Cabal/Illuminati, etc.) apparently paved the way for the German space program to be revealed.

Four days later, Tillerson and Bezos show up at Bariloche, arguably with Chinese space  program representatives already operating in the Patagonia area, to strike a deal with the new generation of German Antarctic leaders.

While many of Fulford’s claims remain controversial and unsubstantiated, his most recent claim of a secret agreement being reach with a new generation of leaders of the Fourth Reich willing to publicly reveal themselves and release fantastic life changing space technologies, is backed by significant circumstantial evidence, and deserves serious investigation.