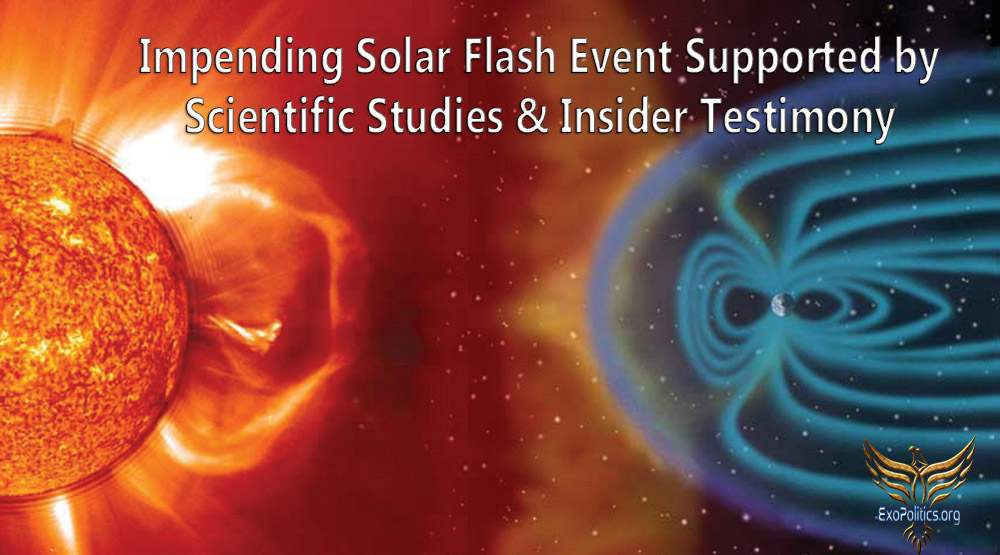 Written by Dr Michael Salla on January 7, 2019. Posted in Featured, science and technology

In a six-part series of videos titled Earth Catastrophe Cycle, Ben Davidson, founder of Space Weather News, presented multiple scientific studies of “micronova” (aka “solar flash”) events that recur in human history, and the subsequent pole shifts that haven taken place on a cyclic basis. The scientific data confirms that micronova events are common occurrences in our galaxy, and such events span Earth’s history, are associated with pole shifts, yet the evidence has been suppressed by government authorities for decades.

In part 4 of his video series, Davidson presents scientific studies showing how “micronovas” have been observed occurring in multiple stars by astronomers. “Micronova” is Davidson’s term for a supernova type event that is not large enough to exhaust or destroy the star generating it, but large enough to devastate nearby planets. He said:

What is a micronova? It’s not a supernova, it’s not even really a nova, as it is like the little sister of the nova, one that can affect the entire world but not completely destroy it.

Davidson’s video shows evidence that such micronova events are a cyclic part of the life of a star, and includes the following list of 10 known recurring nova events observed in the Milky Way. Davidson referred to a number of sources pointing to solar flashes being part of Earth’s geological history. Among these is Dr. Robert Schoch, Associate Professor of Natural Sciences at Boston University and author of Forgotten Civilization: The Role of Solar Outbursts in our Past and Future. In a video interview in part 4 of Davidson’s series, Schoch explained that ice core samples from Greenland show that there was a solar burst or flare recorded at the end of the last Ice Age, known as the Younger Dryas, about 9700 BCE.

Schock and Davidson estimated that the micronova event was as much as 40 times the power of the most destructive solar storm observed in modern history, the 1859 Carrington event. This would make the Younger Dryas micronova as much as an X-100+ solar flare according to the measurement scale currently in use. Quite alarming, especially if this were to repeat any time soon.

The enormous amount of plasma that arrived immediately after the micronova event circa 9700 BCE, bombarded the Earth producing an effect similar to one or more major asteroid impacts. This has caused confusion and led many archeological researchers into mistakenly interpreting historic evidence of impacts causing and/or ending the last ice age, as deriving from asteroid impacts rather than plasma discharges.

In his interview and book, Schoch asserts that ancient records are consistent with a solar flash that wiped out an ancient civilization predating the end of the last Ice Age, widely assumed to be Plato’s Atlantis.

The scientific data on solar flashes goes back several decades. Bradley Schaefer, an astrophysicist at NASA’s Goddard Space Flight Center, wrote a paper titled, “Flashes from Normal Stars” that appeared in the February 1989 edition of The Astrophysical Journal. He dated the beginning of research into solar flashes to a 1959 study by H. Johnson who at the time “performed the only study which is capable of detecting rare flashes from normal field stars.”

Schaefer examined NASA data on glazing discovered on lunar rocks that was first presented in a 1969 paper by T. Gold published in Science who had concluded: “Some glazing is apparently due to radiation heating; it suggests a giant solar outburst in geologically recent times”. Schaefer agreed with Gold’s analysis and reached a similar conclusion:

The existence of a glazing on the top surfaces of lunar rocks has been used as a strong argument for a “solar outburst” where the Sun increased its luminosity by over 100 times for 10 to 100s within the last 30,000 years.

Schaefer went on to describe how such a “solar outburst” (aka solar flash or micronova) could result in an Extinction Level Event:

I crudely estimate that a flash … might result in a major extinction episode. (The Cretatious-Tertiary dinosaur extinctions cannot be explained by a flash since there is no mechanism for enhancing iridium.) The Sun could have undergone a few (at most) such super flashes in the last 108 yr [100,000,000 years]. These data suggest that our own Sun may have a significantly lower event rate than average field stars.

The scientific data compiled by Davidson in his video series is cogent and compelling, yet, it provides no answer to the critical question: “When will the next micronova or solar flash event occur?” For a detailed answer, we can turn to the startling testimony of Corey Goode, who says he has received intelligence briefings about when the “solar flash” will occur from two independent sources: a Secret Space Program Alliance and an Inner Earth civilization he calls the “Anshar”.

Goode says that he served in multiple secret space programs over a 20 year period from 1986 to 2007. While his claims have been very controversial, my research has found multiple points of corroboration which have been detailed in my Secret Space Program Series, including Goode being the first to release two Defense Intelligence Reference Documents that corroborate key elements of his remarkable testimony.

Goode said that scientists from different space programs predicted the solar flash occurring at the end of Solar Cycle 24 (2008-2018/2019), and that this led to plans for the evacuation of global elites to safe places similar to what was depicted in the movie, 2012.

In an interview, Goode gave details about what he had been told during a December 2017 visit to a secret moon base called Lunar Operations Command [LOC] about multiple solar flash events that have been predicted by different groups and their timing:

I have said for a while that I was told that it was not one solar event but a series of events that led up to one large event. During my meeting on the LOC… I was told that the Elite had expected the final “solar sneeze” [solar flash] to occur at the end of this Solar Minimum period (2018/2019 from their estimates). “Are we officially in Solar Minimum?” was the question of one of the people present. To my dismay that question went unanswered as the people being briefed were paying very close attention to this particular topic.

The Elite began moving underground in large numbers based on this probable timeline. The “Programs” had used probable future technology to nail down the time of Alien and Suppressed Technology Disclosure and The Solar Event. None of them agreed on what the Solar Event would be as many thought it would be a flash that would turn them into ascended light beings while others expected it to be a terrible day for the planet Earth…. The “Egg Heads” and the Smart Glass Pads described all of this occurring in the 2018-2023/24 time window.

Goode said that he also received information from another source, the Anshar, who claim to be the descendants of time travelers from our future. This meant that their ancestors had lived through the upcoming solar flash event(s) and passed down its effects through historical records, which were carried into the Earth’s distant past by the Anshar to maintain the current timeline. Goode explains what the Anshar had told him:

The flashes (not necessarily all flashes are visible) that have been occurring will build up to one large solar event. The Anshar described a major Solar Event in their past (Our Future?) that was very much like the “full circumference mass coronal ejection” that I described being one of the scientific theories about the Solar Event.

They described the solar blast being so powerful that it caused a physical pole shift on the Earth of several degrees. They described the atmosphere being breached by the CME [Coronal Mass Ejection] in the Northern Hemisphere which caused massive fires that wipe out a large area and in doing so knocks out all technology on the planet. There was a fair amount of loss of life in the actual event.

Goode’s information is very helpful since it provides intelligence data from secret space program scientists and Inner Earth beings who are monitoring solar activity, and are also aware of records detailing solar flashes or micronova from Earth’s history. This complements the scientific data compiled by Davidson which substantiates micronovas as a recurring phenomenon for many stars in our galaxy, including our own sun.

This take us to another key element of Davidson’s Earth Catastrophe Cycle series, which Goode’s classified sources provide complementary information. This concerns the predicted micronova or solar flash being a trigger for a geophysical pole shift that could be catastrophic for many regions of the planet.