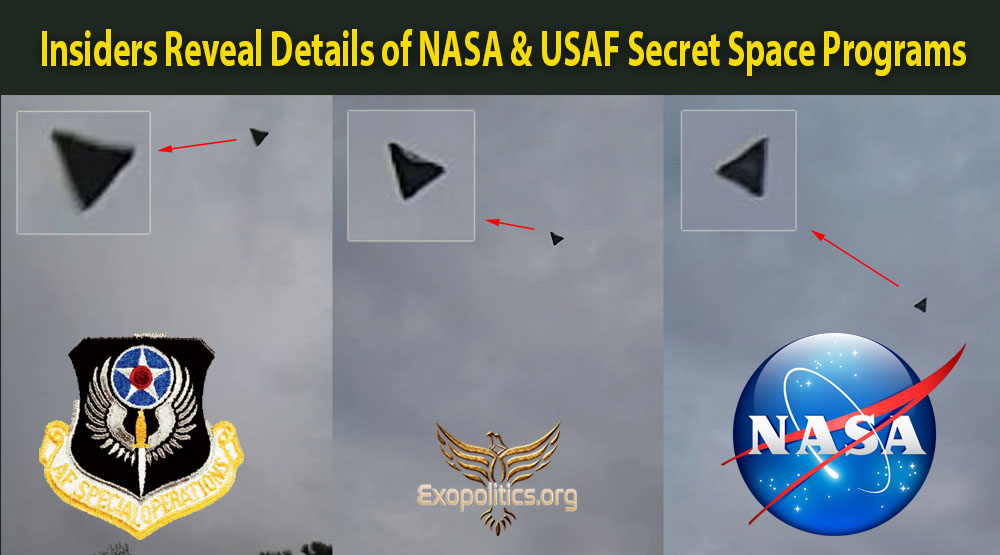 Emery Smith, a former U.S. Air Force Surgical Assistant has confirmed that NASA has a manned secret space program in addition to its widely known civilian program, which uses an astronaut corps drawn from USAF personnel. In addition, Smith corroborated other insider testimony about secret space stations approximately 10 times larger than the International Space Station, which are serviced by TR-3B antigravity spacecraft flying out of MacDill Air Force Base in Tampa, Florida and other classified locations.

In the August 21 episode of Cosmic Disclosure with host David Wilcock and another Secret Space Program insider, Corey Goode, Smith discussed his knowledge of the secret NASA program, which is entirely separate to a USAF run program that is supported by the Defense Intelligence Agency, National Security Agency and the National Reconnaissance Office. Smith explained:

There are two sections to NASA. One is what the public sees and another underground Cabal type one, that does really mediocre stuff, as far as getting things into space for these other classified places. So their mission honestly is more on a supply type thing for them because they are kind of like the lower echelon compared to these other ones that Corey is talking about [USAF dominated secret space program]

Goode said that he was aware of USAF personnel trained to be astronauts with the secret NASA program, and encountered NASA personnel on one of the Moon’s secret bases called Lunar Operations Command. In response to Wilcock’s question about whether he had heard of this secret NASA program, Goode [CG] said the following in an interaction with Smith [ES]:

CG: Well yes, it is actually the same part as I was talking about the secret astronaut corps … that is almost all Air Force

CG: … Trying to remember the name of the base … that they do a lot of their training … its close to one of the Great Lakes. A base where they train these people to fly these advanced technologies.

ES: Right…. Getting back to the Air Force and NASA too, definitely they are all working together. I totally support that 100% because they are all Air Force astronauts that run these missions … they are trained separately.

From 1963 to 1969, 17 military astronauts were secretly trained together with those chosen for regular NASA missions, and were earmarked to join the classified USAF space program. Here is how PBS described what happened:

These men, 17 in all, were set to make history in space as the first military astronauts, performing covert reconnaissance from orbit. Yet while NASA’s astronauts were gracing magazine covers and signing autographs, the MOL teams were sworn to secrecy; most of the program’s details remain classified even today. And MOL was canceled in 1969, before any of its astronauts went into space.

While President Lyndon Johnson ostensibly cancelled the Manned Orbiting Laboratory program, Smith and Goode are telling us that the military astronaut training program secretly continued, and produced hundreds or even thousands of military astronauts for both classified NASA and USAF missions over the following decades.

Smith then dropped a bombshell about his own involvement in the secret NASA space program:

DW: You said something provocative, which is you said that you were one of these astronauts.

ES: I was scheduled to go up in one of the shuttles, yes, luckily I didn’t because the one that got blown up over Texas was my return flight [Space Shuttle Columbia blew up over Northern Texas on February 1, 2003].

DW: You are actually saying the regular space shuttle?

DW: You were going to be a conventional astronaut?

Smith says that at the time he was doing contract work for an aerospace company specializing in space medicine wanting to optimize astronaut performance:

Well, while working at the Space Coast Aeromedical Institute, we were contracted out as astronauts to go actually, to these places and run some tests for long-term space travels for human beings. They were trying to find out a way that we could make your body last a lot longer in space before its starts breaking down….

I was working in Florida at the Space Coast Aeromedical Institute when I first developed my platelet rich plasma stem cell device. And they thought there would be some use for this regenerative properties in space. And they wanted to see if you could still concentrate these cells in space and if they would still be viable to give to the astronauts for long-term space exploration.

What lends plausibility to Smith’s controversial claim is that in the late 1990’s he was a pioneer in the emerging field of platelet rich plasma therapy (aka PRP) – platelets are a blood component that initiates clotting to stop bleeding.

Smith’s platelet rich plasma stem cell research contributed to the development of “platelet gel”, which is described by the Platelet Gel Network as:

… a platelet-based wound sealant used to enhance and hasten the repair of wounds and bone. Platelet gel contains high concentration of platelets and a native concentration of fibrinogen harvested by centrifugal separation of autologous whole blood. Platelet gel has many characteristic components that allow it to offer itself as a superior product for augmenting wound healing.

In a Discovery Health documentary, Smith’s expertise with PRP therapy was credited with saving the life of a man suffering from a Cobra bite.

In 2004, Smith was awarded a patent for a centrifuge tube assembly to separate blood products used for platelet research. Based on his pioneering medical research into platelet rich healing devices and association with Dr. Buza, it is very feasible that in 2003 Smith was scheduled to do some classified space based medical research with the Southern [Space Coast] Aeromedical Institute as he claims.

Smith and Goode furthermore explained that the NASA secret space program uses antigravity flying triangles, and they were both aware of a highly classified wing of such triangles flying out of MacDill Air Force Base, home of Special Operations Command.

Goode referred to a number of photographs that I had previously released from my source, JP, who lived at the time in Tampa, Florida, next to MacDill:

ES: Well, there is a flight [Wing] of them at MacDill Air Force Base there in Tampa, Florida.

CG: Oh yes, as a matter of fact, Dr Salla of exopolitics.org has recently written several articles. Before the last hurricane [Irma] hit Florida, people were photographing them evacuating these craft from MacDill. And there are two or three types of these triangles, I’m told that are stationed there. A full wing is stationed there at MacDill.

The photographs taken by JP showed different types of antigravity craft as exemplified in the following video comprising photos taken of an October 19 incident near MacDill AFB. The patch was important because it revealed that the antigravity craft were not part of a testing program, but belonged to an operational wing of flying triangles and other antigravity craft operating out of MacDill. Smith and Goode had confirmed that such an antigravity wing does covertly operate out of MacDill, and it falls under the authority of Special Operations Command.

Smith and Goode went on to describe what they had witnessed concerning the classified space stations operated by the USAF:

CG: I’ve described one in the past and it was a space station that was created out of NASA ship hulls, or out of the rocket boosters that they had repurposed, that had ejected from other rocket launches into space. They repurposed them, put them end-to-end into, like, a big circle.

CG: That were like a spoke radiating from a middle, and it spun slowly to create one-third gravity.

ES:  Right, and that’s that, this is the one. I actually told you [pointing to David Wilcock] about this a while ago.

ES: So to hear him saying it, it’s very enlightening to that.

CG: And the images I saw where the spoke in the middle had an area that went down, and everything else was turning but the middle was fairly positioned where it wasn’t moving around. And that’s where the TR-3Bs would connect, was at a port here, here at the top. And they would come through, and they would go out through the spokes and go to the sections of the station that were created out of these reclaimed parts.

The main difference was that rather than use a single modified Titan rocket to create an orbiting space platform for Earth surveillance, up to nine of these repurposed boosters would be linked to form a circular shaped space station.

In an earlier episode of Cosmic Disclosure, Goode provided an artist’s sketch of what he had seen. In conclusion, Smith has provided corroborating testimony for Goode’s earlier revelations concerning a classified Air Force secret space program. Smith and Goode’s claims about the existence of an operational space wing of flying triangles and other antigravity craft out of MacDill AFB is supported by multiple photographs of such craft in the vicinity of MacDill.

Importantly, Smith and Goode further revealed that NASA has its own secret space program that uses covertly trained Air Force astronauts, in addition to the civilian program which is widely known to the general public. Smith’s claim of having been scheduled to join this secret Astronaut corps in order to conduct pioneering medical research to optimize astronaut performance is plausible based on his pioneering medical research and patents concerning PRP applications.