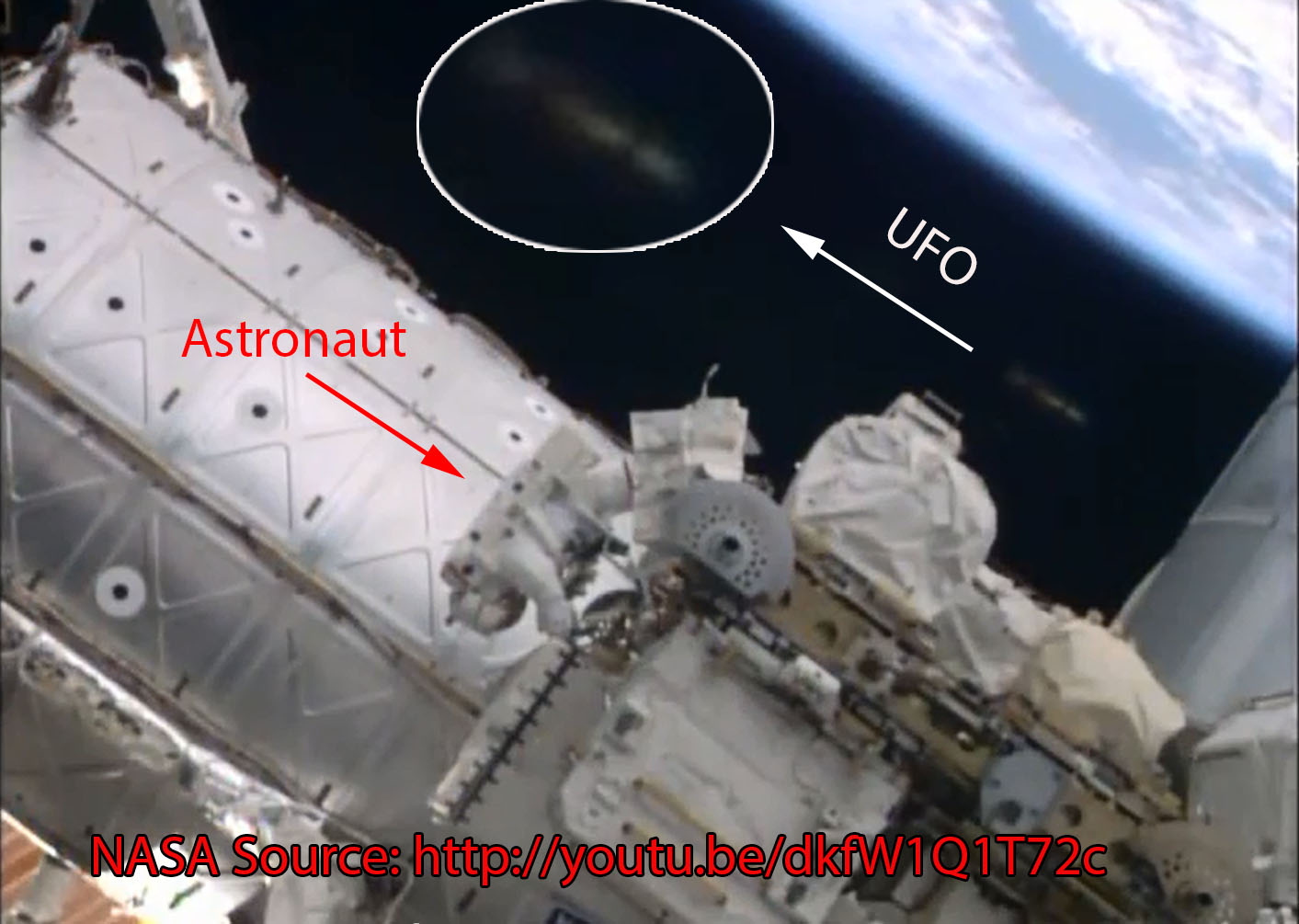 Is a UFO monitoring astronauts during ISS space walk?

Written by Dr Michael Salla on October 7, 2014. Posted in exonews On October 7, the live camera feed from the International Space Station (ISS) captured video of a UFO near by astronauts during a spacewalk. In a Youtube video uploaded today by NASA of the spacewalk, an unknown craft is clearly visible as one of the spacewalking astronauts performs his mission. The UFO appears for 12 seconds beginning at the 1:40 minute mark (see embedded video extract). It has an elliptical metallic shape and is of unknown size. It appears to be close by and monitoring the astronauts.

One possible explanation is that the UFO could be one of two resupply ships currently visiting the ISS. On September 23, a Space X Dragon cargo ship arrived at the ISS. It was followed two days later by the Soyuz TMA-14M carrying three additional crew members. The two craft are respectively scheduled to return to Earth on October 18 and November 10. However, both craft are docked, and not floating near the ISS as the unknown object appears to doing in the October 7 video.

Another explanation is that it could be a lensflare or camera reflection of part of the ISS itself. However, lensflares and reflections typically happen as sunlight or a strong light source reflects off the sides of a camera lens and/or nearby objects. However, there does not appear to be any strong source of light near the astronauts or camera during the video segment when the UFO appears. The even light in the background of the video during the critical period appears to rule out a lensflare/camera reflection explanation. The video footage follows incidents earlier in 2014 which showed what appeared to be UFOs visiting the ISS. The most revealing occurred on January 29 and involved live video feed of a yellow elliptically shaped UFO that appeared to actually have docked with the ISS. This raised remarkable possibility that the ISS was being visited by unknown astronauts or even extraterrestrials. To date, no satisfactory answer has been given by NASA for the unknown spacecraft captured on video docking with the ISS.

The October 7 incident cannot be video of either the Dragon X or Soyuz spacecraft which are docked. Nor does it appear to be caused by a lensflare/camera reflection. The elliptical shape of the object is consistent with earlier incidents at the ISS involving UFOs close by or even docking with the ISS. Is it possible that once again, a spacecraft of unknown origin has been captured on video visiting the ISS, this time monitoring a spacewalk by two astronauts?