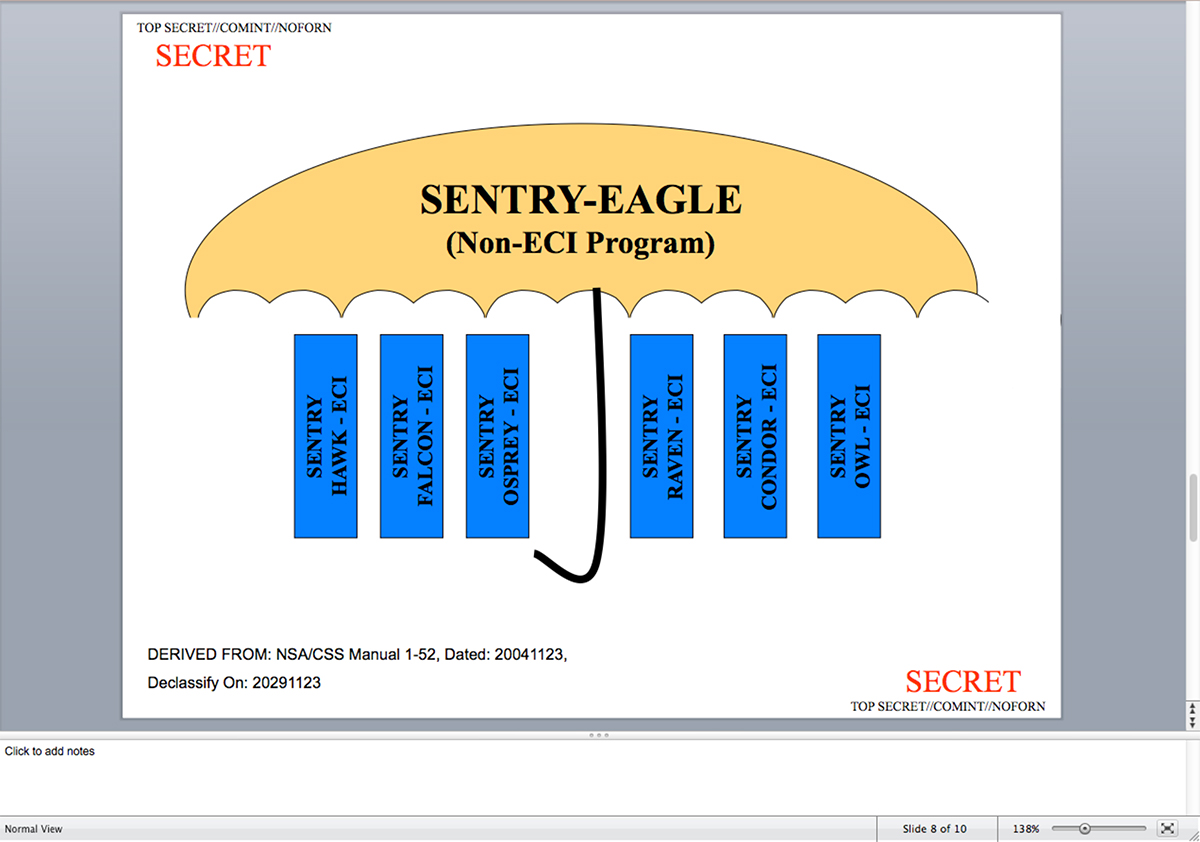 On October 10, Peter Maass and Laura Poitras writing for The Intercept, released more powerpoint slides from leaked NSA documents concerning highly classified programs that are hidden from public scrutiny. The documents, originally leaked by Edward Snowden, reveal that “Sentry Eagle” is used as an umbrella term for hiding the NSA’s most sensitive programs that are classified “Exceptionally Controlled Information” (ECI). Several powerpoint slides show how ECI programs are hidden beneath less classified programs as a cover. The leaked documents support claims made 16 years earlier by Dan Sherman, another NSA whistleblower, who revealed that he worked in a secret communications program with alien (extraterrestrial) entities that was hidden beneath less classified NSA programs as a cover.

“You are being indoctrinated on Sentry Eagle,” the 2004 document begins, before going on to list the most highly classified aspects of its various programs. It warns that the details of the Sentry Eagle programs are to be shared with only a “limited number” of people, and even then only with the approval of one of a handful of senior intelligence officials, including the NSA director.

Among the leaked power point slides is a set called “Core Secrets Slide Slices.” These slides (see slideshow) reveal how ECI programs are only made available to a few select individuals within the Intelligence Community with a strict need to know access. Two of the slides show how Sentry Eagle acts as an umbrella for hiding its most sensitive ECI programs under less classified programs. This supports the claims by Dan Sherman who worked for three years as an electronic intelligence specialist with the NSA.

Dan Sherman served with the US Air Force for twelve years (1982-1994), and received a number of awards including the Commendation Medal and the Achievement Medal. He revealed that he was recruited into a classified program, “Project Preserve Destiny” (PPD), that was conducted under the auspices of the National Security Agency (NSA). The training was for Sherman to become an “intuitive communicator” with extraterrestrial biological entities (EBEs). Essentially, Sherman would learn to telepathically interface with EBEs and pass on this information through a secure computer system to his handlers within the NSA. Sherman’s training for PPD was conducted at the same time while training for a conventional military career in electronic intelligence (ELINT), which itself was classified. Sherman described that his ELINT training acted as a cover for his participation in PPD that spanned a three year period (1991-1994). In his book, Above Black: Project Preserve Destiny – Insider Account of Alien Contact and Government Cover-Up (1998), Sherman revealed how he was recruited and trained in a way unknown to his normal ELINT military trainers. The training occurred over the same period as his normal training in ELINT. When he was subsequently assigned to the NSA, Sherman worked on a specially designed computer where he could perform both his normal ELINT work, and also work as an intuitive communicator with EBEs.

This is how Sherman describes, in his 1998 book, the rational for hiding deep black alien related projects under the umbrella of a less classified program:

When someone is assigned to an alien project they are also assigned to the collateral black mission (cover mission). One of the reason for this is if someone were to reveal any alien information, by extension, they would most likely reveal something about the cover project and it would be on this basis that someone would be prosecuted for divulging classified information. (p. IX)

Sherman’s claim of working within a deep black project hidden within a less classified NSA project has been corroborated by the leaked NSA documents. “Sentry Eagle” operates precisely in the way described by Sherman’s account of his time working in two classified programs for the NSA from 1991 to 1994.

Sherman’s claims that he was recruited from the USAF for the NSA alien program while training as an ELINT specialist with the USAF suggests that Project Preserve Destiny was likely part of the Sentry Osprey program that involved cooperation between the NSA and other intelligence agencies.

After officially retiring from the USAF and ending his classified work with the NSA, Dan Sherman went public with his 1998 book in which he supplied documentation of his training and work with the NSA as an electronic intelligence specialist. Sherman’s claim made 16 years ago that he worked in a highly classified (“above black”) program hidden within a less classified NSA “black” program has not been corroborated until now with the leaked Snowden documents. Sherman’s claims suggest that within one or more of the NSA’s Sentry Eagle six compartments, there are ongoing alien (extraterrestrial) projects that are hidden within less classified NSA cover programs.